Segmental arterial mediolysis (SAM) is a presumably vasospastic disorder [1]. SAM commonly involves large to medium sized intra-abdominal, cerebral and rarely coronary arteries. In 1943, Kernohan and Woltman described arteries with features of SAM in the posterior circulation of the brain for the first time [2]. The first case of SAM was presented in 1976 by Slavin and Gonzalez [3]. At first they termed it segmental mediolytic arteritis, but due to lack of inflammatory changes, renamed it segmental arterial mediolysis [3]. We describe an extremely rare case of a combined hemorrhage from an intra-abdominal and intracranial aneurysms.

A 54-year-old female presented herself at the emergency department of another hospital with one week of progressive sensory loss of both lower legs, weight loss and mild cognitive impairment. She did not report any other complaints. Medical history showed a oesophageal stenosis at 22 years of age for which she was surgically treated with placement of a colon interponate. There was a history of alcohol abuse, but she had been sober for 5 years. She smoked 20 cigarettes per day. Physical and neurological examination revealed a slight weakness in the muscles of the lower legs, but no other abnormalities. Laboratory results were normal. During further work up, an EMG showed an axonal polyneuropathy and a thiamin deficiency was established. Therapy with thiamin was started.

Several days after admission she experienced a drop in hemoglobin. A CT-abdomen showed a retroperitoneal hemorrhage, but no signs of active bleeding. She was transferred to our university medical center because of the availability of interventional radiology in case of active bleeding.

After transfer she was admitted to our intensive care unit (ICU). After several days there was a sudden decrease in the level of consciousness (Glasgow Coma Score 3). She was subsequently intubated and a CT-cerebrum showed a SAH in the area of the left medial cerebral artery with bilateral ventricular hemorrhage and hydrocephalus (Figure 1). An extra-ventricular drain was placed and she was treated according to protocol. Her consciousness returned to normal. Because of the uncommon combination of a retroperitoneal and subarachnoidal hemorrhage the differential diagnosis included atherosclerosis, infection, vasculitis and connective tissue diseases. After a detailed search of the literature, SAM was added. CT-angiography (Figure 2) and conventional angiography (Figure 3) showed multiple aneurysms and an active bleeding with hematoma originating from the pancreaticoduodenal artery. An embolization of the gastroduodenal artery was performed and was followed by a coiling of a broad based aneurysm of the left internal carotid artery (Figure 4). In the weeks following, there was a slow recovery of consciousness and she was transferred to our neurological ward. There she developed a fatal sudden shock. Resuscitation with fluid, inotropes, vasopressors and antibiotics was unsuccessful. The suspected cause of death was refractory septic shock. 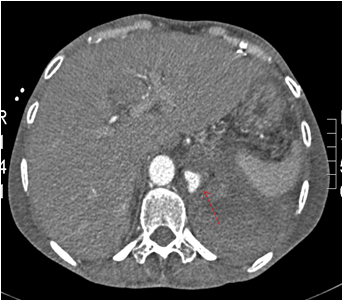 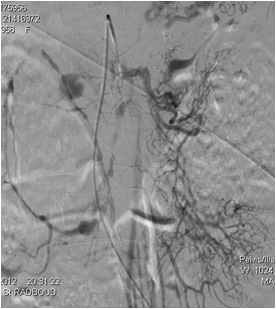 Figure 3. Treatment of two dissecting aneurysms of the superior mesenteric artery and embolization of the gastroduodenal artery. 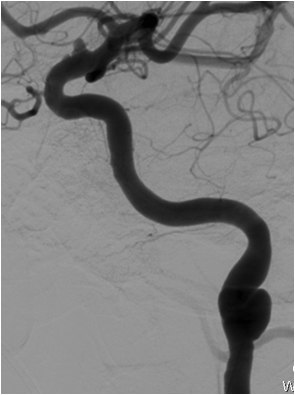 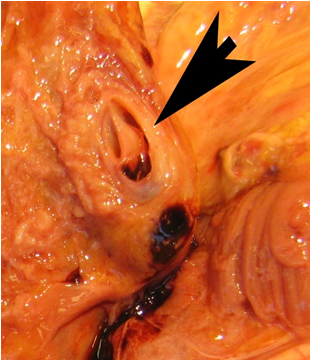 Figure 5. Autopsy revealed a dissecting aneurysm of the celiac trunk. 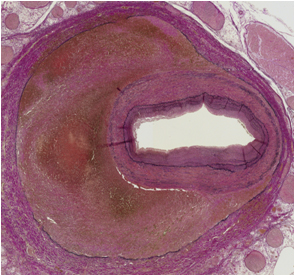 Figure 6. On microscopic examination, a dissecting aneurysm with segmental disruption of the external elastic lamina was found, matching segmental arterial mediolysis in the reparative phase.

SAM is hypothesized to be of vasospastic origin. There is a non inflammatory degradation of the medial layer of muscular arteries [3]. There are two distinct phases in SAM: (a) an initial injury phase and (b) a subsequent reparative phase. During the injury phase there are two separate lesions responsible for alterations in the artery wall: 1) mediolysis and (2) a tear that separates the medial muscle from the tunica adventitia. Mediolysis is caused by the disruption of smooth muscle cell membranes and can involve the entire medial muscle with preservation of the tunica intima en internal elastic lamina. Transmedial mediolysis generates arterial gaps. In the reparative phase, the medial defects in the lesion are repaired, filled with granulation tissues and finally fibrous tissue replaces the injured sites [4]. The process of injury and repair results in arterial wall lesions that can lead to dissection, aneurysm formation, stenosis or hemorrhage caused by rupture of the artery [3,5].

Clinical presentation of SAM varies and is a result of the organ system affected by damage from arterial dissection or occlusion. The most common presentation however, is non-specific abdominal pain and flank pain. A more acute presentation involves shock owing to an intra-abdominal hemorrhage (as in our patient), occurring in less than 30 percent of the cases, but with a high mortality rate of 50% [6,7]. Other presentations are central nervous system involvement with stroke or headaches and renal involvement with hematuria [8]. SAM affects all age groups. In a recent systematic review there was a slight male predominance of 1,5:1 [6].

SAM is a disease of the medium and large sized arteries. The most common site of vessel involvement are the visceral mesenteric arteries. Radiographic features and angiographic findings are arterial dilatation, arterial stenosis, single and multiple aneurysms (string of beads appearance), dissecting hematomas and arterial thrombosis [4,9]. These imaging findings reflect the histological changes of the disease. The radiological hallmark of SAM is the presence of dissecting aneurysms [10]. Multiple dissecting aneurysms were detected with the imaging studies we performed, compatible with SAM.

A definitive diagnosis of SAM requires a histopathological examination of the affected vessels. However, there usually are clinical clues pointing toward the diagnosis of SAM based on history, physical examination, laboratory investigations and imaging [9]. The differential diagnosis of SAM includes atherosclerosis, fibromuscular dysplasia (FMD), infection (mycotic aneurysms and endocarditis) connective tissue diseases and vasculitis (Behcet disease, poly-arteritis nodosa, ANCA-associated vasculitis, giant cell arteritis, Takayasu arteritis, Kawasaki disease), inherited defects in vessel wall structural proteins (type IV Ehlers-Danlos syndrome, Marfan syndrome) and neurofibromatosis.  In our patient history taking revealed no clues for the above diseases, especially no history of infection or inflammation. On medical examination there were no phenotypical characteristics of Type IV Ehlers-Danlos syndrome. The laboratory evaluation ruled out vasculitis and there were no signs of inflammation. Imaging studies showed no characteristics of FMD and was compatible with SAM. Furthermore histological examination showed no signs of atherosclerosis, vasculitis or mycotic infectious cause, but examination of the dissecting aneurysms was compatible with segmental arterial mediolysis.

There is no specific therapy for SAM. Clinical presentation, the vessels involved and the presence of end organ ischemia play an important role in the management of SAM. For instance the patient presenting with an acute intra-abdominal bleeding is treated with transfusions to achieve hemodynamic stability and simultaneous endovascular intervention to treat the ruptured aneurysm. In the past surgical intervention was the first-line treatment for a patient with acute intra-abdominal hemorrhage. With the development and widespread availability of endovascular treatment options, angiography and embolization techniques, have become the treatment of choice and surgical intervention is reserved for vascular lesions that cannot be treated endovasculary [11]. There are no specific guidelines on how to manage non-acute patients. Since the natural history of SAM is poorly understood, such patients should be treated conservatively. There are several cases that reported complete or partial resolution of unruptured aneurysms at follow up angiography after supportive treatment [12]. There is no consensus on length of follow-up. Naturally there is an indication for strict antihypertensive management in patients with untreated aneurysms to decrease the risk of rupture. The place of antiplatelet agents or anticoagulants is uncertain. Since there is no inflammation in SAM treatment with steroids or Immunosuppressants should be avoided. There is no benefit and their use increases the risk of any adverse outcome (e.g. infection and poor wound healing) [13].

In conclusion, this uncommon case describes a SAH and refractory shock due to rupture of intra-abdominal dissecting aneurysms caused by segmental arterial mediolysis resulting in death. In cases of retroperitoneal or intra-abdominal hemorrhage with evidence of multiple dissecting aneurysms, SAM should be included in the differential diagnosis. Even though there is no specific treatment for SAM, unnecessary treatment for other diseases could lead to an adverse outcome.

There are no conflicts of interest

©2015 Simons B. This is an open-access article distributed under the terms of the Creative Commons Attribution License, which permits unrestricted use, distribution, and reproduction in any medium, provided the original author and source are credited.

Figure 3. Treatment of two dissecting aneurysms of the superior mesenteric artery and embolization of the gastroduodenal artery.

Figure 5. Autopsy revealed a dissecting aneurysm of the celiac trunk.

Figure 6. On microscopic examination, a dissecting aneurysm with segmental disruption of the external elastic lamina was found, matching segmental arterial mediolysis in the reparative phase.