The primary purposes of this study were to compare lipid oxidation rate and lipolysis during late pregnancy between obese and lean women, and to examine the relationships between maternal lipid metabolism, inflammation and insulin resistance. This study may identify lipid metabolism as a mechanism contributing to maternal inflammation in obese pregnant women.

Thirty-four women participated in the study (lean: n=18, obese: n=16). Women receiving prenatal care at the Women’s Health Center and Women’s Health Clinic at Barnes Jewish Hospital/Washington University between August 2013 and November 2014 were screened for inclusion. Approximately 350 women were screened, and 50 women who met all criteria with ongoing pregnancies were approached for participation late in their second trimester.Inclusion criteria included women ages 18-44 years, confirmed singleton viable pregnancy with no identified fetal abnormalities (as determined by routine anatomy ultrasound at 18-22 weeks), and pre-pregnancy BMI between 18.0 and 24.9 kg/m2 for the lean group or pre-pregnancy BMI between 30 and 45 kg/m2for the obese group. Exclusion criteria included: 1) multiple gestation pregnancy, 2) inability to provide voluntary informed consent,3) self- reported use of illegal drugs (cocaine, methamphetamine, opiates),4) current smoker who did not consent to cessation, 5) current usage of daily medications by class: corticosteroids, beta-blockers (known to affect lipid metabolism) and anti-psychotics (known to alter insulin resistance and metabolic profiles), 6) diagnosis of gestational diabetes in current pregnancy, history of gestational diabetes, pre-pregnancy diabetes or prior macrosomic (>4500g) infant (each elevate the risk for gestational diabetes in the current pregnancy, or undiagnosed gestational diabetes), 7) history of heart disease, or 8) any other condition that would preclude exercise.

All study procedures were performed at the Washington University School of Medicine Institute for Clinical and Translational Sciences Clinical Research Unit (CRU). All pregnant women participated in two maternal visits between 32 and 37 weeks gestation. Approval for this study was granted by the Institutional Review Board at Washington University (IRB ID: 201306109, NCT: NCT02039414).

Body composition was measured using skinfold anthropometry in order to determine maternal percent body fat. Body fat percentage was determined by pressing folds of the skin at seven sites with a caliper (Harpenden Skinfolds Caliper, Baty International, United Kingdom), recording skin thickness, and entering the data into a standardized equation that accounts for age as previously described[26]. Participants also completed the YMCA submaximal cycle test as previously performed in order to predict cardiorespiratory fitness levels [27].National Institutes of Health’s Dietary History Questionnaire II was completed by each participant to determine potential differences in maternal diet in the month leading up to study visits[28].Previous literature demonstrates that dietary history questionnaires are valid and reproducible among pregnant populations [29].

Approximately one week after Visit 1, subjects were admitted to the CRU the morning after an overnight fast. The night prior, subjects were instructed to consume a standardized meal consisting of 50% carbohydrates, 30% fats, and 20% protein. Upon admission to the CRU, height, weight, and vital signs were obtained. A catheter (IV) was placed in a hand vein and heated to 55°C by using a thermostatically controlled box in order to obtain arterialized blood samples as previously described [30].Participants kept their hand in the box throughout the entire study visit. Participants rested for approximately 30 minutes prior to measuring lipid oxidation rate using indirect calorimetry (True One 2400, Parvomedics, Sandy, UT). Participants laid supine while a canopy was placed over their head for 15 minutes to measure oxygen consumption and carbon dioxide production in order to determine lipid oxidation rate [31].After the initial indirect calorimetry measurement, a baseline blood collection was obtained. Participants then exercised continuously at approximately 40% of their predicted VO2peak(based on the YMCA submaximal cycle test) for 30 minutes. Lipid metabolism was examined via indirect calorimetry and plasma analysis during and after exercise because low-to-moderate intensity exercise increases both adipose tissue breakdown (i.e. lipolysis) and lipid oxidation, and low-to-moderate intensity exercise might mimic their daily activity levels (~3-5 METS, e.g. household chores, caring for other children, walking).Exercise indirect calorimetry was performed and blood was drawn at the 10, 20, and 30 minute time points of submaximal exercise. After exercise termination, participants returned to supine and blood was drawn 10, 30, and 60 minutes-post cessation of exercise (i.e. recovery). Indirect calorimetry was performed 30 minutes post-exercise for 15 minutes as described for the baseline measurement.

All samples were immediately placed on ice and plasma was separated by centrifugation within 30 minutes of collection. Plasma samples were stored at -80°C until final analyses were performed. Blood samples for glucose were collected in heparinized tubes and analyzed immediately with an automated glucose analyzer (Yellow Springs Instruments Co, Yellow Springs, OH). Plasma insulin concentration was measured by electrochemiluminescence technology (Elecsys 2010, Roche Diagnostics, Indianapolis, IN). Insulin and glucose levels were used to calculate the homeostatic model assessment-insulin resistance (HOMA-IR)[32]. The HOMA-IR is an index of insulin resistance that reflects fasting glucose concentration measured at the fasting insulin concentration. Inflammation was examined through high-sensitivity C-reactive protein (CRP) and measured by immunoturbidimetric assay (Roach Diagnostics, Indianapolis, IN). Blood samples used to determine plasma free fatty acids were collected in in tubes containing EDTA. Plasma free fatty acid concentrations were determined by enzymatic colorimetric assay (Wako Pure Chemical Industries, Osaka, Japan). Lipolysis was calculated by the area under the curve (AUC) [33,34]for free fatty acids from baseline to the end of the study period. A summary score to represent total lipid oxidation rate throughout the study period was determined by calculating the AUC using lipid oxidation rates from baseline, exercise, and recovery time points. Clinical lipid profiles including triglycerides, total cholesterol, low-density lipoprotein, and high-density lipoprotein were also obtained at the CRU.

At parturition, neonatal birth weight was obtained. In addition, 44 mL of umbilical vein blood was collected, centrifuged within 30 minutes of parturition, and placed in a -80°Cfreezer for further analysis. Umbilical cord blood was used to determine neonatal HOMA-IR (insulin and glucose levels), free fatty acid concentration, and CRP.

Within 48 hours of delivery, neonatal anthropometrics were measured in the CRU. Neonatal length (Pediatric Length Board, Ellard Instrumentation LTD, Monroe, WA) and head circumference (Gulick II Tape Measure, model 67020, Country Technology Inc., Gays Mills, WI) were measured. Body composition (fat and lean mass) was measured by skin fold thickness at four different sites (triceps, subscapular, ilium, and thigh, measured by one recorder) and by air displacement plethysmography (Pea Pod, Life Measurement, Inc., Concord, CA). All neonates were full-term (≥37 weeks gestation) at the time of delivery except for one in the obese group. This neonate’s data were excluded from the analysis.

Based on previous data comparing lipid metabolism between lean and obese females at rest and during exercise[22],we estimated an effect size of 1.1. Therefore, with an alpha level of 0.05, 16 women per group were required to power the study at β=0.80. 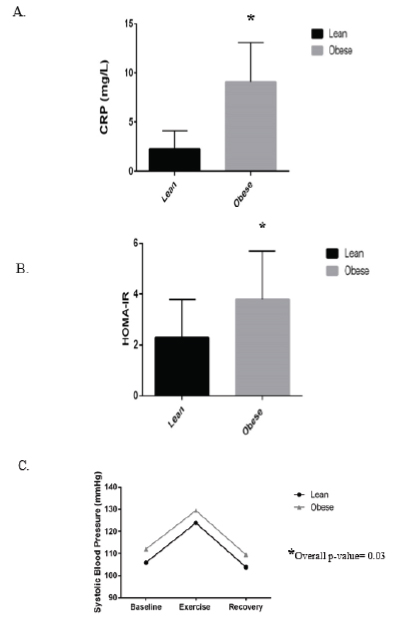 Dietary composition was similar between groups (Table 2). Three women (two lean, one obese) did not complete the dietary survey. 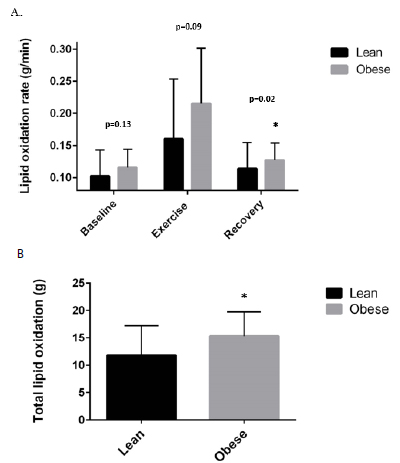 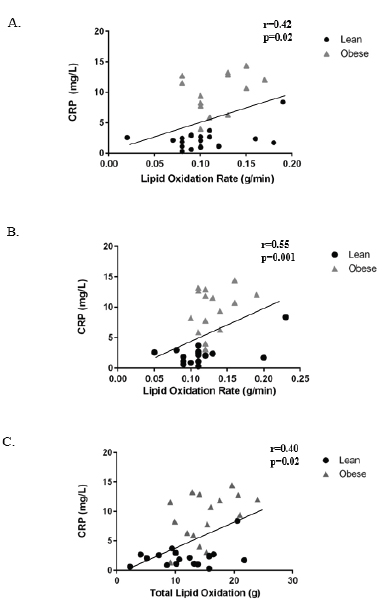 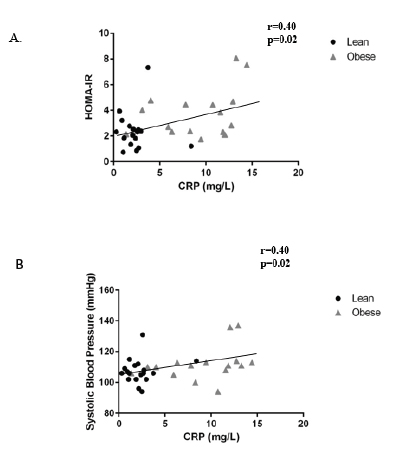 Air displacement plethysmography was not performed on three neonates due to time of delivery relative to discharge, but all other neonatal anthropometrics were obtained. Cord blood could not be obtained from one lean and two obese participants.Neonatal anthropometrics and metabolic outcomes were similar between groups (Table 3).

Our primary novel findings from the study were: 1) maternal lipid oxidation was higher in obese pregnant women compared to lean pregnant women, particularly following an acute bout of low-intensity exercise, 2) maternal lipid oxidation rate was significantly associated with maternal inflammation, and 3) maternal inflammation was related to maternal insulin resistance and systolic blood pressure. These results suggest that elevated maternal lipid oxidation might contribute to increased inflammation and subsequent reductions in insulin sensitivity during late pregnancy in obese women. Importantly, we believe the finding of elevated lipid oxidation rates in obese pregnant women following a mild bout of physical activity is clinically meaningful as this metabolic environment would be representative of women who recently participated in typical daily physical activities (e.g. running errands, cleaning the house, or taking care of another child). Lipid oxidation rate in non-gravid adults is known to increase over resting values during low-to-moderate physical activity and remained elevated for 2-3 hours post-exercise [36,37]. 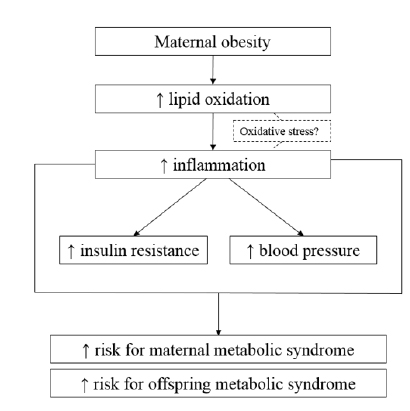 Neonates of pregnant obese woman had similar body composition, insulin sensitivity, and inflammatory markers as lean pregnant women. These results suggest that despite the metabolic abnormalities associated with obesity during pregnancy, the fetus may be protected from some of these detrimental effects, at least at 24-48 hours post-parturition. However, the “fetal origins hypothesis” suggests the origins of adult health diseases such as obesity, cardiovascular disease, and diabetes may be caused byin uteroexposures[59,60].Therefore, it is plausible that metabolic abnormalities may be epigenetically programmed, but are not apparent or measurable until later in life. For example, Liebowitz et al. found that offspring of obese women had higher plasma inflammation at 12 years of age [61]. Offspring of obese women with elevated plasma inflammation during pregnancy may develop inflammation as they age as a result of fetal programming; however, these changes may not be detectable at delivery when umbilical cord blood is obtained. Similarly, Whitaker concluded that obesity during pregnancy more than doubles the risk of obesity in the offspring between ages two and four [43,62]. Although neonatal body composition in our study was not different between lean and obese pregnant women, it is possible that differences might emerge during the preschool and childhood years. It is also plausible that our sample size was not large enough to detect a difference in birth weight or body composition as it is well-accepted that obese women have larger babies [10,11].Based on our findings and the current literature, longitudinal studies of offspring born to obese women are needed.

A limitation of the present study was the observational study design, thus, cause-and-effect relationships could not be determined from these data. Our results should be cautiously interpreted as this pilot study was powered based on our primary outcome of lipid oxidation rate. We are not adequately powered to investigate many other maternal and neonatal outcomes. Bias may have been introduced because measurements and assessments were not blinded (it was obvious who was an obese “case” versus a lean “control”), but uniform data collection procedures were followed for all participants to minimize bias.

In conclusion, we found that obese pregnant women have higher lipid oxidation rate, particularly after an acute bout of low-intensity exercise during late pregnancy. In addition, higher maternal lipid oxidation rates were associated with higher maternal inflammation. Maternal inflammation was related to insulin resistance and systolic blood pressure. We did not find any differences in neonatal metabolic outcomes between lean and obese women. Future studies investigating the role of maternal lipid oxidation-produced oxidative stress and interventions targeting lipid metabolism and inflammation to improve maternal and neonatal health in obese pregnant women are warranted.

The nursing staff at the Washington University Institute for Clinical and Translational Sciences Clinical Research Unit as well as Barnes-Jewish Hospital’s Labor and Delivery floor should be acknowledged for their hard work and altruism. The funding sources: Clinical and Translational Science Award (CTSA) program of the National Center for Advancing Translational Sciences (NCATS) of the National Institutes of Health (NIH) under Award TL1 TR000449 and the Movement Science Program as part of Washington University School of Medicine’s Program in Physical Therapy should also be acknowledged for their contributions.

©2015Tinius RA.This is an open-access article distributed under the terms of the Creative Commons Attribution License, which permits unrestricted use, distribution, and reproduction in any medium, provided the original author and source are credited.