Crohn’s disease is a chronic transmural inflammation the gastrointestinal tract. Commonly develops in the terminal ileum and the proximal colon. It may be presented with unusual presentation which may lead to misdiagnosis as in the current case.

miss-diagnoses of the present case of Crohn's disease was due to the presence of skin tags that were confused with hemorrhoids. A careful examination of these skin tags is essential for accurate diagnosis. Correlation with other parameters for diagnosing Crhon's disease; ileocolonoscopy and histopatholgical examination correlated with preliminary laboratory data and imaging.

Cohn's disease (CD) is an inflammatory bowel (IBD) of multifactorial etiology, which can strike anywhere from mouth to anus [1]. The dis­ease can then be triggered by any of a number of differ­ent unknown environmental factors and sustained by an abnormal immune response to these factors [2]. CD can affect multiple parts of the GI tract simultaneously causing disconnected patches of ulceration between healthy mucosal areas to create a cobblestone appearance. It most commonly develops in the terminal ileum (also called regional enteritis) and the proximal colon (also called granulomatous colitis), extends through all bowel tissue layers, and can penetrate extraintestinal structures [3]. The clinical presentation of CD patients depends on the affected area in the GI tract and it varies from chronic diarrhea, vomiting, abdominal pain to Rectal bleeding, abdominal mass and malnutrition. Sometimes the disease may be presented by unusual presentation which may lead to misdiagnosis as in the current case. Crohn's disease is a challenging disease and sometimes it is difficult to make an accurate diagnosis of this disease; the diagnosis of Crohnʼs disease is based on clinical presentation, evaluation of the entire intestinal tract, and histopathologic findings [4]. A treatment plan should be organized according to disease activity [2], behavior and localization of disease, and associated complications. Whatever treatment plan is chosen, it is most appropriate [5].

She re-presented to a surgeon who noted that the complaint was started 17 years ago. Two Hemoroiectomy operations were done. During this period the patient had multiple remissions and relapses during the course of the disease. A past history of fundoplication and total vagotomy for hiatal hernia and acidic reflux; in addition to antrectomy and gastrojejunostomy (Roux-en-Y anastomosis for duodenal ulcers). Over a period of  sixteen years; the patient had frequent rectal bleeding, difficulty during defecation and crampy abdominal pain with steatorrhea. Full lab investigation was performed; fecal calprotectin, liver and kidney function, CBC, in addition to rectal colonoscope till terminal ileum was done which revealed active Crhon's disease; CT with contrast to abdomen and pelvis revealed stenosis with desquamation in terminal ileum associated with colitis. MRI indicated two enteric fistulae. The condition becomes stationary for one year under the treatment with Infliximab (Remicade) injection every two months. One year later Infliximab was stopped and shift the course of treatment to oral Azathioprine tab twice a day. The patient presented to gastroenterology clinic complaining of severe rectal bleeding with and without defecation, lower back pain and anal stenosis. The course of treatment was started again after diagnosing it as relapsing Crhon's disease; Adalimumab (Hummerra 40 mg) subcutaneous injection every two weeks were recommended with other oral medications. Ileo-colonoscopy was done after digital rectal examination and IV sedating the patient under direct vision up to terminal ileum was done twice to the patient first for diagnosis and second one for follow up. Excisional biopsy for sessile polyp and multiple biopsy specimens for entire colonic mucosa and was sent for histopathological assessment.

Multiple specimens from the entire colonic mucosa and from the sessile polyp were fixed on formaline. 4- micron thick recuts of all the formalin-fixed and Haematoxylin-Eosin (H& E) stained sections and were reviewed. CT abdomen and entero-colonography was done also first to assess and diagnose Crhon's disease and second one for follow up. MRI pelvis for perianal fistula was done three times (for diagnosing presence of fistula and for follow up). 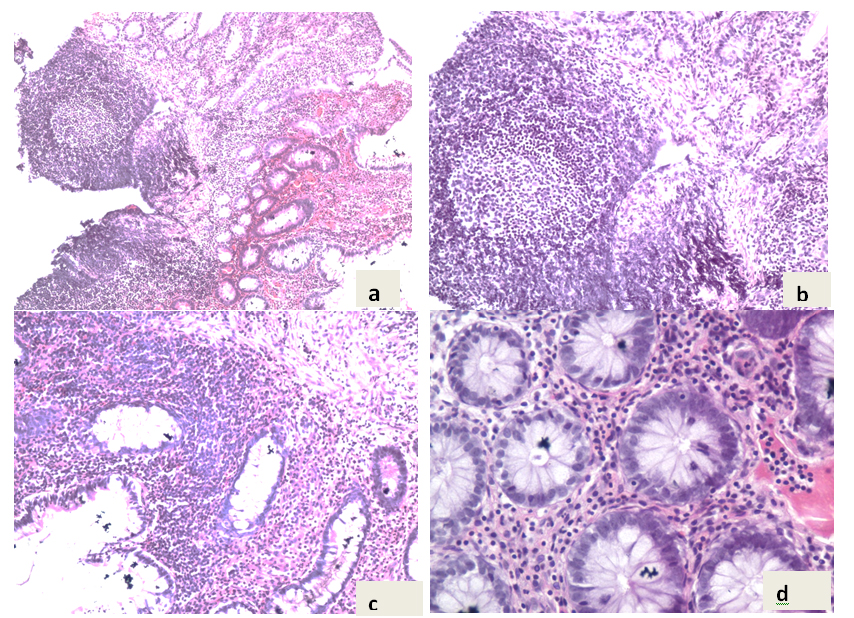 In the follow up CT abdomen and entereo-colonography normal CT features of the different small and large intestinal loops, with no abnormal enhancement, mural thickening or peri-intestinal mesenteric lesions.

MRI for the first time noted two inter-shincteric fistulous tracts "St-James type I'. Second one after6 month from starting treatment noted short simple inter-shincteric fistula "St-James type I". 6 months later for follow up no MRI evidences of perianal fistulations detected; good improvement of the condition which was correlated with clinical signs and symptoms, CT results and lab investigations.

Crohn's disease is a chronic inflammatory bowel disease with remitting and relapsing episodes. It is characterized by the fact that it almost always involves ileum, often has skip lesions, & often colon may be involved [1]. Patients with Crohn's disease always present with symptoms due to the intestinal lesions-diarrhoea and abdominal pain.

To diagnose a case of Crhon's disease the patient should be evaluated initially and symptoms should be elicited in detail. Obtain a complete medical, surgical, social, and family history, and perform a detailed review of systems. Preliminary laboratory data (eg, inflammatory and anemia markers) may be helpful.

To evaluate the disease activity fecal calprotectin have been found to be the most accurate tool to assess the presence of active mucosal inflammation [5]; as compared with clinical scores and common serum markers (ESR, CRP, platelet) and correlated with ileocolonoscopy and other imaging tools [7] .

This might make FC a good biomarker for screening for Crhon's disease or as a noninvasive predictor of increased risk of relapse [8]. In our case fecal calprotectin was a good noninvasive predictor for the disease activity; at time of diagnosis it was 298 mg/kg and after one year under Infliximab the level becomes <45 mg/kg which mean remission of the disease. Other published cases reported that patients who had a calprotectin value >50 mg/L (=250 μg/g) at inclusion were at considerable risk of a relapse during the following year, whereas patients with a calprotectin level <50 mg/L had a good chance to maintain remission [9].

©2016Ali AS.This is an open-access article distributed under the terms of the Creative Commons Attribution License, which permits unrestricted use, distribution, and reproduction in any medium, provided the original author and source are credited.