Bone marrow mesenchymal stem cells MSCs) secrete paracrine factors that may exert healing effect on the wounded tissues. This study was done to determinate the effect of MSCs or MSC-Conditioned Media MSC-CM) on the wound healing in intact mice, and under hyperglycemic condition. We established a burned wound healing mice diabetes mellitus DM) model and cultured primary bone marrow MCSs. A MSCs suspension or MSC-CM was injected into wound bed. Phenotype of MSCs, multiple differentiating capacities, and wound closure was determined. Secretion of cytokines or growth factors into culture media was determined by ELISA. MSCs and MSC-CM caused a rapid wound closure. MSCs secreted into the media a wide range of paracrine factors. These data demonstrate that MSCs promote wound healing in mice with or without STZ-induce diabetes mellitus through secretion of paracrine factors.

Diabetic foot ulcers DFUs) are one of the major complications of diabetes mellitus worldwide [1]. Approximately 25% of these patients will have progressive disease that eventually leads to amputation [2-4]. Wound healing is a coordinated process comprising an inflammatory reaction, angiogenesis and formation of extracellular matrix accompanied by scar tissue remodeling. Cellular participants as well as multiple growth factors and cytokines released by the cells at the wound site regulate these processes and finally result in wound closure. Deregulated healing processes may delay repair and may eventually lead to chronic wounds, such as those observed in diabetes mellitus [5-7]. Mesenchymal stem cells MSCs) therapy has emerged as a novel and promising candidate approach for the treatment of DFUs, probably by be as progenitors of all connective tissue cells, decrease apoptosis, cell replacement and modulation on inflammation and immune response. MSCs have been shown to mobilize and home ischemic and wounded tissues where they secrete chemokines and growth factors to promote angiogenesis and extracellular matrix remodeling. Recently, MSCs transplantation has demonstrated significant wound healing in patients with DFUs [8-20]. In the present study, we established a delayed wound healing model in diabetic mice and evaluated the impact of MSCs engraftment, and injection of MSC-Conditioned Media on delayed wound healing.

All experimental protocols were approved by the Animal Care and Use Committee of the Institute of Clinical and Experimental Lymphology, Novosibirsk, Russia, in accordance with guidelines of the National Institutes of Health Guide for the Care and Use of Laboratory Animals. The protocol of anesthesia, burn induction, post-burn care and sacrifice were identical for all animals. The animals were sacrificed under deep ether general anesthesia. Animal were housed under a 12-hour light/dark cycle with free access to food and water. A total of 48 male C57Bl6 B6) mice weighing 20-25 g, were housed 5 per cage in room maintained at 22 ± 0.5°C and relative humidity of 65-70%. The animals were allowed to adapt to the laboratory for at least 2-hour before testing and were only used once. Experiments were performed during the light phase of the cycle 10:00-17:00).

Whole bone marrow was isolated from both the femurs of intact B6 mice. Bone marrow was aspirated with a syringe with a 26-gauge needle, containing 1 mL heparin, and disaggregated into a single-cell suspension. Mononuclear cells were separated by density-gradient centrifugation over Ficoll-Paque Sigma). The cells were seeded onto culture T-25 flask at 1 × 105 cells/cm2 with 37°C/5% CO2 in culture medium containing Dulbecco’s modified Eagle’s medium DMEM; Hyclone) supplemented with 10% heat-inactivated fetal caw serum FCS, Hyclone), 80 μg/mL gentamycin Gibco). Three days later, non-adherent cells were removed by changing the medium. After 14 days in culture, adherent cells were passaged with 0.05% trypsin-EDTA Gibco). Mesenchymal stem cells-Conditioned Media MSC-CM) was prepared by plating 2 × 106 MSCs in 10 mL DMEM supplemented with 10% FCS, 80 μg/mL on T-25 flask for 48-hours. Following culture, the media was filtered through a 0.22mm membrane.

MCSs of passage 3 incubated with monoclonal PE-conjugated antibodies for CD34 and CD73, with FITC-conjugated antibodies for CD90, and CD45, and with APC-conjugated antibodies for CD105 BD) in the dark for 30 min at 40C. The cells were subsequently washed three times with phosphate buffer solution PBS), resuspended in 500 μL FACS buffer 0.05% NaN3 + 5% FCS in PBS) and analyzed on FACSCanto II BD) using FACSDiva BD). Adipocytes differentiation was induced in DMEM culture medium containing 1-methyl-3-isobutylxanthine, 10-9 M dexamethasone, 5 mM insulin and 5 mM indomethacin. Osteogenic differentiation was induced in DMEM culture medium containing 50 μg/mL ascorbic acid, 10 mM β-glycerophosphate and 10-9 M dexamethasone. The medium was replaced every 2-3 days for 14 days. Matured adipocytes that formed lipid vacuoles were stained with oil red O Sigma) staining. Calcium formation of cells with a rounder shape was demonstrated by staining with alizarin red S Sigma), a marker for the osteocytes phenotype.

Diabetes mellitus was induced in 24 B6 male mice. B6 mice were starved for at least 12-hour before a single intraperitoneal injection of streptozotocin STZ, Sigma) dissolved in sodium citrate buffer 0.1 mM, PH 4.4) at a dose of 60 mg/kg. At day 0 and during 28 days following after STZ injection, blood samples were obtained from the tail vein, and the blood glucose levels were measured by glucometer AccuCheck Advantage and AccuCheck Comfort Strips, Roche; Branchburg, NJ). STZ-treated B6 mice with blood glucose levels above 15 mM/L were considered diabetic and were used in this study.

The hair was clipped from the back of each animal with standard animal clippers. 24 B6 mice with STZ-diabetes and 24 B6 mice without STZ-diabetes were anesthetized and burns were induced on the thigh using 1 × 2 cm piece of hot metal, producing a burn of up to 10% of the total body surface and extending to all layers of skin but not involving the muscular tissue. At day 0 after wounding, 1 × 106 MSCs in 200 μL PBS MSCs wounds; n=8), 200 μL MSC-CM MSC-CM wounds; n=8), and 200 μL PBS PBS wounds; n=8) were inoculated into the wound bed. The wounds were observed daily. Estimates of wound area were calculated from the product of two mutually perpendicular perimeters. Wound area was measured using a caliper. Wound healing was quantitatively measured and calculated by the remaining wound area.

Skin wound sites on day 30 after injury, excised from the mice, were fixed in 4% formalin for 4-hour at room temperature prior to embedding in paraffin. 5 μm thickness paraffin sections were dewaxed, rehydrated, washed and stained with hematoxylin-eosin H&E). At least three skin sections per mouse were analyzed.

Nitrite was measured as an indicator of nitrite oxide NO) production in supernatants from MSCs. NO inhibition assay was conducted using Griess reagent kit for nitrite determination Molecular Probes). The amount of NO was calculated using a sodium nitrite standard curve.

Data were analyzed by the Statistica 6.0 for Windows. All data obtained are presented as the mean ± SEM standard error of the mean). The differences between mean values were tested for significance using the nonparametric Mann-Whitney U test.

Induction of diabetes mellitus in the animal model

The animal remained hyperglycemic post-STZ infusion over the study time period higher than 15 mM/L Table 2). There was no mortality post-STZ treatment. The blood glucose levels were checked by glucometer. These results suggested that intraperitoneal administration of STZ induce Diabetes Mellitus in B6 mice

Data are presented as mean ± standard error of mean; P, compared with glucose level on day 0.

The burned wounds were prepared on the dorsum of intact B6 male mice and in STZ-induced Diabetes Mellitus B6 male mice. Control animals received identical burned wounds without MSCs or MSC-CM engraftment to measure baseline healing. Engraftment with MSCs and injection MSC-CM helped discriminate between the effect of local delivery of cells and the subsequent systemic response. The response on the grafted animals revealed direct, cell-mediated effect of engraftment, whereas the response on the injection MSC-CM revealed the extent of the indirect systemic effect of MSC-CM injection on promoting wound healing Table 3).

Accelerated healing persisted in the MSCs and MSC-CM wounds through days 21 and 24 in intact mice, and through days 7 and 21 in STZ-induced Diabetes Mellitus mice. We found that the MSCs or MSC-CM wounds exhibited significantly improved closure in normal healing and in diabetic mice p<0.05) at time point, days, 7, 14, 21, and 24 Table 2).

Next, we examined the impact of MSCs engraftment or MSC-CM injection on reepithelialization. As shown in Figure 2, the epithelial thicker showed no differences among these groups on day 30. However, the epithelial was thicker in all experimental groups compare normal skin. 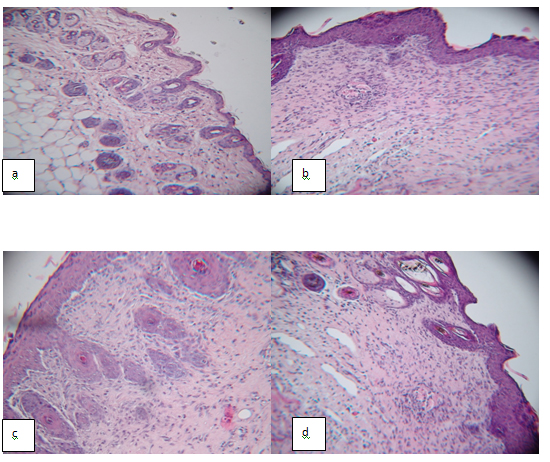 These findings suggested that MSCs or MSC-CM may participate in and promote the formation of derma by topical wound bed transplantation.

We also evaluated the impact of MSCs or MSC-CM on hair follicle, sebaceous gland, and blood vessels formation in wound Table 4).

©2016Lykov AP.This is an open-access article distributed under the terms of the Creative Commons Attribution License, which permits unrestricted use, distribution, and reproduction in any medium, provided the original author and source are credited.

Data are presented as mean ± standard error of mean; P, compared with glucose level on day 0.