To probe the contribution of each of those cytokines to MMP-9 gene expression by articular chondrocytes in vitro would generally require that specific inhibitors for each of them be individually tested. In that regard, the effect of IL-1β or TNF-α blockade on MMP synthesis was previously reported with the results showing that IL-1 receptor antagonist or TNF-α blocking monoclonal antibodies inhibited MMP production [4]. However, the contribution of IL-6 to MMP-9 production by cultured human chondrocytes remains to be fully elucidated. Therefore, to achieve this objective, the extent to which tocilizumab (TCZ), a recombinant fully humanized IgG1(κ) monoclonal antibody that neutralizes the interaction between IL-6 and the IL-6 receptor-α (IL-6Rα) [5] inhibits recombinant human (rh)-IL-6-mediated MMP-9 production was determined in the immortalized human juvenile T/C28a2 and C28/I2 chondrocyte lines. These human chondrocyte lines were employed for this analysis because they had been previously shown to express cartilage-specific extracellular matrix protein genes [6,7]. T/C28a2 and C28/I2 chondrocytes also expressed several other molecules characteristic of authentic human chondrocytes, most notably the molecular signature SOX9 gene, considered the “master” transcriptional regulator of several cartilage-specific genes as the type II collagen (COL2A1) gene and the aggrecan (AGRN) gene [6-8].

The effect of rhIL-6 on the synthesis of chondrocyte-derived neutrophil gelatinase-associated lipocalin (NGAL) was also evaluated. The rationale for analyzing NGAL production by C28/I2 chondrocytes stemmed from our previously reported finding that chondrocytes obtained from human osteoarthritis knee cartilage synthesized NGAL in response to IL-1β [9]. In addition, we showed that NGAL in synovial fluids obtained from patients with end-stage osteoarthritis was found in a complex with MMP-9. Moreover, we proved that the MMP-9/NGAL complex preserved MMP-9 activity by demonstrating that this complex prevented MMP-9 from being degraded, thus preserving MMP-9 activity [10].

The cytokines, rhIL-6, and rhTNF-α, and soluble IL-6Rα (sIL-6R) were purchased from various commercial vendors.

PANC-1 was employed as the positive control for MMP-9 production because PANC-1 had previously been shown to over-produce MMP-9 [13]. In addition, MMP-9 was found to be substantially increased over control levels in response to phorbol myristate acetate (PMA) [13]. Thus, PANC-1, T/C28a2 and C28/I2 chondrocytes were employed for the MMP-9 ELISA and PANC-1 and C28/I2 chondrocytes for the anti-MMP-9 antibody ICC. For the MMP-9 ELISA, the concentration of MMP-9 in T/C28a2, C28/I2 or PANC-1 was determined from serial dilutions of the protein lysate. The average of duplicate ELISA determinations was used to calculate the amount of MMP-9 (pg/ml) produced by the cells.

For ICC, the number of anti-MMP-9-negative or anti-MMP-9-positive PANC-1 or C28/I2 chondrocytes and NGAL-negative or NGAL-positive chondrocytes were enumerated by quantifying the mean intensity of 6 sampled areas in photomicrographs from each of the control and treatment groups using the Metamorph® software program. The mean intensities were then normalized to the negative control to determine the number of MMP-9 or NGAL-positive cells reported in arbitrary units.

ELISA Analysis: The amount of MMP-9 or NGAL (pg/ml) produced by C28/I2 chondrocytes was calculated using the average of duplicate determinations from their respective ELISA. Chi-square (www.socscistatistics.com/tests/chisquare/default2.aspx) was used to calculate the significance of differences between the amount of MMP-9 produced by C28/I2 chondrocytes treated with rhIL-6 alone (50 ng/ml) and rhIL-6 plus TCZ, at various concentrations with an expected difference of Δ = +/-20% between the groups employed in the chi-square 2 × 2 table.

ICC Analysis: The frequency of MMP-9-positive or NGAL-positive cells in the control groups (n = 5) or the various treatment groups (n = 5) was calculated from the computer-generated anti-MMP-9 antibody/anti-NGAL antibody ICC results. The results shown as “arbitrary units” was then analyzed by determining whether the comparison groups had equal variances. Then the F-value was calculated using the one-way ANOVA calculator (turner.faculty.swau.edu/mathematics/math241/materials/anova). To calculate a p-value, the Student’s t-test was employed for comparison of groups with equal variances where p<0.05 was considered significant.

MMP-9 production is increased by rhIL-6 and rhTNF-α: Effect of sIL-6R and TCZ

A standard curve was produced for the MMP-9 ELISA which showed that the concentration of MMP-9 as a function of OD450nm was linear (Figure 1). This standard curve was used to calculate the amount of MMP-9 (pg/ml) produced by T/C28a2 or C28/I2 chondrocytes or by PANC-1 cells using direct interpolation of the OD450nm measurements performed on the various cell lysates. 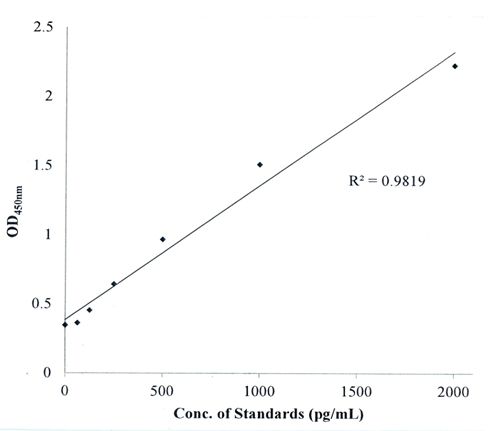 Figure 2. MMP-9 Production by T/C28a2, C28/I2 Chondrocytes and PANC-1 Cells Measured by an MMP-9 ELISA. MMP-9 Production: % Change OD450nm Relative to the “No Additions” Control Group. The concentration of cytokines, inhibitors or other factors for each group were rhIL-6-50 ng/ml; sIL-6R-30 ng/ml; TCZ-200 ng/ml; rhTNF-α -20 ng/ml; PMA-30.7 ng/ml. Values shown for MMP-9 produced by T/C28a2 chondrocytes incubated with either rhTNF-α or rhTNF-α plus TCZ or PANC-1 cells incubated with PMA exceeded 350 pg/ml.

We next examined the effect of varying the concentration of TCZ between 200 ng/ml and 800 ng/ml on MMP-9 production by C28/I2 chondrocytes in response to rhIL-6 (50 ng/ml). Although the average of duplicate determinations from the MMP-9 ELISA showed that TCZ (200 ng/ml) reduced rhIL-6-induced MMP-9 after 1 hr by Δ = -16% (Figure 3) this difference did not reach statistical significance. However, TCZ at concentrations ranging from 400 ng/ml to 800 ng/ml significantly reduced MMP-9 after 1 hr (Figure 3). Furthermore, the reduction in MMP-9 in response to the combination of rhIL-6 plus TCZ was sustained after 4 hrs (Figure 3). Of note, concentrations of TCZ greater than 200 ng/ml did not increase its inhibitory effect on MMP-9 production at 1 hr (Figure 3) or at 4 hrs (Figure 3). The result of the chi-square analyses for all of the group comparisons is summarized in Table 1. 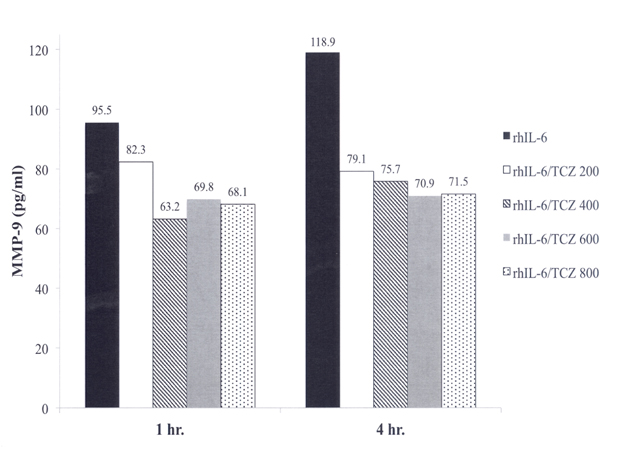 MMP-9 production was also analyzed by ICC using an anti-MMP-9 antibody that is reactive with both pro-MMP-9 and activated MMP-9. The photomicrograph in Figure 4A shows the appearance of the negative C28/I2 chondrocyte control for MMP-9. This image was arrived at by processing the cells for ICC but without applying primary anti-MMP-9 antibody. The other photomicrographs (Figure 4B) show C28/I2 chondrocytes from the “no additions” control group which were identified by Metamorph® as MMP-9-positive (arrows) in 6 regions of the cover slip encompassing the microscopic fields enumerated for the ICC analysis. 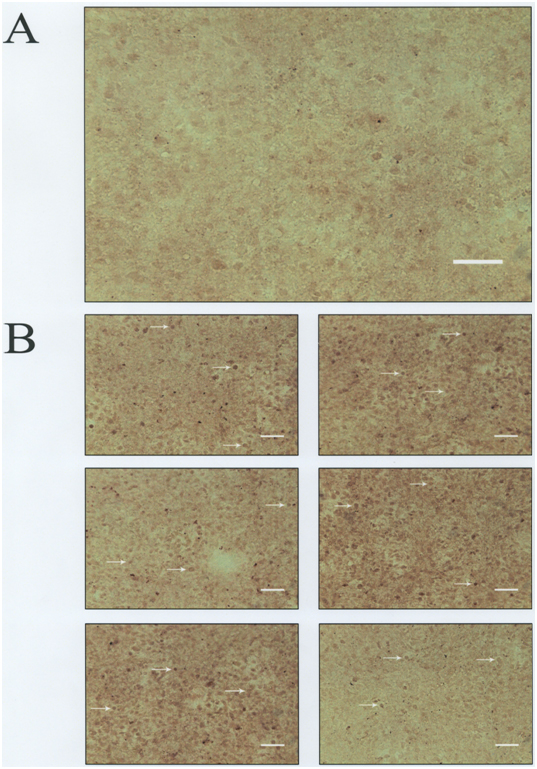 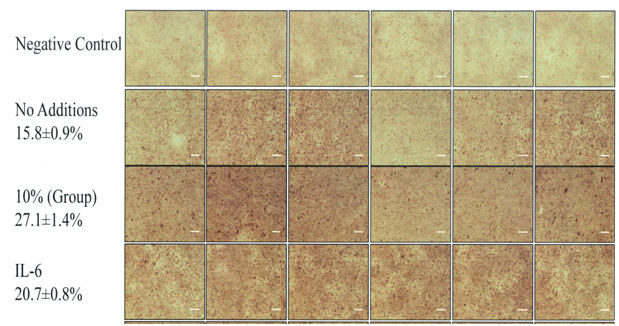 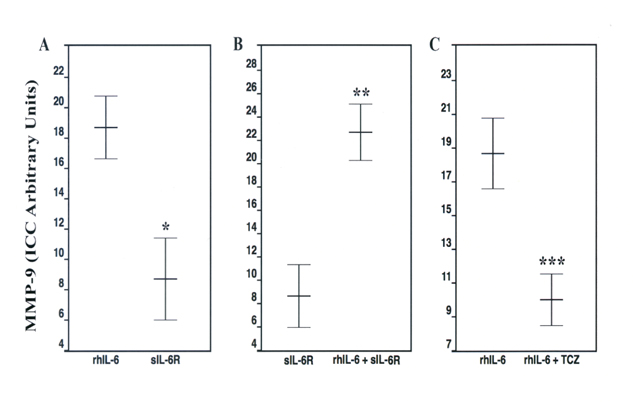 The number of NGAL-positive cells was significantly reduced (F = 48.86; p = 4.3 x 10-4) by sIL-6R compared to the “no additions” control group as well as by the combination of rhIL-6 plus TCZ (F = 19.00; p = 4.7 × 10-3) (Figure 7). By contrast, none of the other incubation conditions, altered NGAL production (Figure 7). Notably, rhIL-6 plus TCZ failed to significantly reduce NGAL compared to rhIL-6. In general, the ICC analysis of the various treatment groups for NGAL-positive chondrocytes mirrored results obtained with the NGAL ELISA (data not shown). 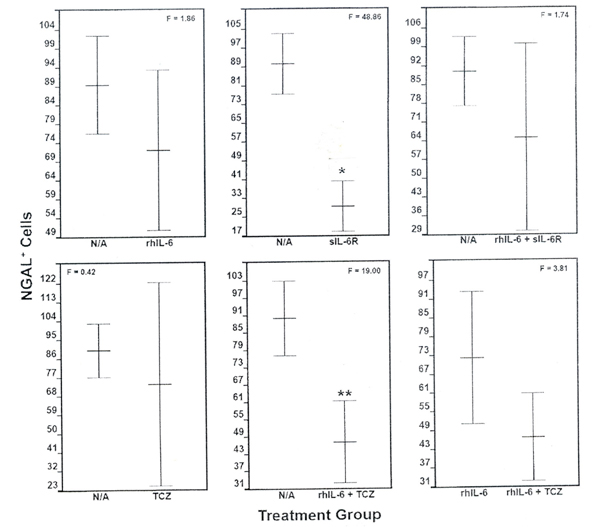 Figure 7. The Effect of Various Incubation Conditions on NGAL Production by C28/I2

The principal objectives of this study were 1) to determine the extent to which rhIL-6 stimulated MMP-9 and NGAL production by immortalized human juvenile chondrocyte lines; and 2) to determine whether sIL-6R or TCZ, the latter a fully humanized IgG1(κ) monoclonal antibody which neutralizes the interaction between IL-6 and IL-6Rα, augmented or inhibited MMP-9 and/or NGAL.

The principal result of MMP-9 ELISA was that rhIL-6 alone stimulated MMP-9 production by C28/I2, but not T/C28a2 immortalized human chondrocytes. In the MMP-9 ELISA, the combination of rhIL-6 and sIL-6R significantly decreased MMP-9 production in C28/I2 chondrocytes and most importantly, the combination of rhIL-6 plus TCZ also reduced MMP-9 compared to rhIL-6. In analyzing both the MMP-9 ELISA and anti-MMP-9 ICC results, we found that the combination of rhIL-6 plus TCZ reduced MMP-9, but TCZ by itself had no effect on chondrocyte-derived MMP-9 compared to rhIL-6. These data strongly suggested that neutralizing the interaction between rhIL-6 and IL-6R with TCZ in vitro reduced C28/I2 chondrocyte MMP-9 production. However, it remains to be determined the extent to which TCZ would be an effective therapeutic strategy to inhibit MMP-9 production by articular chondrocytes in vivo. This should first be tested in well-validated animal models of RA and osteoarthritis. Although TCZ, a potent inhibitor of IL-6-mediated JAK/STAT activation [5] reduced MMP-9 production, TCZ will not be helpful in sorting out which of three potential IL-6 pathways (i.e. IL-6Rα/gp130, mIL-6R, sIL-6R) is altered by TCZ, since TCZ does not selectively inhibit the IL-6Rα/gp130 pathway [14].

Even though we employed an MMP-9 ELISA and an anti-MMP-9 antibody-based ICC quantitative analysis, we could not determine the extent to which any of the various treatment groups altered either or both pro-MMP-9 and/or activated MMP-9 because the anti-MMP-9 antibody used in the ICC analysis does not distinguish between the two enzyme forms. Thus, we have come to recognize this as an important limitation of this study.

It is well known that IL-6 activates the JAK/STAT pathway in many cell types [5], including chondrocytes [4,11]. In that regard, only two previously published in vitro studies were designed to correlate MMP-9 production per se with STAT protein phosphorylation. In one of these studies, Dechow et al. [15] indicated that there appeared to be a “strong” relationship between MMP-9 gene expression and the level of tyrosine phosphorylated STAT3 (termed STAT3c) in primary breast cancer specimens. In the other study, Kothari et al. [16] showed that IL-6-induced macrophage MMP-9 gene expression was mainly dependent on p-ERK1/2 although MMP-9 gene expression was also inhibited by a JAK-dependent product, identified as IL-10. In view of these results, future in vitro experiments should determine the precise relationship between activation of STAT proteins by rhIL-6 and activation of pro-MMP-9 gene activity as well as identifying any cofactors that may also be involved in pro-MMP-9 gene expression [17]. In that regard, it is generally agreed that these studies will have to employ quantitative PCR for assessing MMP-9 gene expression as well as gelatin-impregnated zymography to determine the extent to which pro-MMP-9 is activated under the various culture conditions. In fact, “gelatin-zymography” will be critical to this assessment in the analysis of pro-MMP-9 activation [18]. This is due to the fact that intracellular processing of latent pro-MMP-9 can produce different forms of active gelatinase, with molecular sizes ranging from 64 kDa to 82 kDa.

It noteworthy that Zer2021 Copyright OAT. All rights reservd any evidence for NGAL protein in either normal human adult articular cartilage or tracheal cartilage or for that matter, any NGAL produced by cultured rat embryo chondrocytes. However, NGAL protein synthesis could be induced in the rat chondrocyte cultures by lipopolysaccharide (LPS) [19], indicating that the NGAL gene was up-regulated by LPS and potentially by other pro-inflammatory mediators.

Finally, the results of this in vitro study could have substantive implications for potentially employing TCZ to regulate rhIL-6-induced MMP-9 and/or NGAL production by articular cartilage in various arthritic conditions. Since MMP-9 forms a complex with NGAL with the MMP-9/NGAL complex maintaining MMP-9 in its activated state [10], the putative inability of TCZ to effectively regulate C28/I2 chondrocyte NGAL production may have significance for future translational research. Although sIL-6R as well as the combination of rhIL-6 plus TCZ significantly dampened NGAL production compared to the “no additions” control group, the overall results suggested that employing therapeutic levels of TCZ in arthritic disorders might be most effective for regulating elevated levels of chondrocyte NGAL when NGAL is over-produced in response to the combined effects of other pro-inflammatory cytokines implicated in arthritis which include, IL-1β [4], TNF-α [4], IL-17A [20] and OSM [21].

The authors declare no conflicts of interest.

©2015 Meszaros EC. This is an open-access article distributed under the terms of the Creative Commons Attribution License, which permits unrestricted use, distribution, and reproduction in any medium, provided the original author and source are credited.

Figure 2. MMP-9 Production by T/C28a2, C28/I2 Chondrocytes and PANC-1 Cells Measured by an MMP-9 ELISA. MMP-9 Production: % Change OD450nm Relative to the “No Additions” Control Group. The concentration of cytokines, inhibitors or other factors for each group were rhIL-6-50 ng/ml; sIL-6R-30 ng/ml; TCZ-200 ng/ml; rhTNF-α -20 ng/ml; PMA-30.7 ng/ml. Values shown for MMP-9 produced by T/C28a2 chondrocytes incubated with either rhTNF-α or rhTNF-α plus TCZ or PANC-1 cells incubated with PMA exceeded 350 pg/ml.

Figure 7. The Effect of Various Incubation Conditions on NGAL Production by C28/I2