Caries levels among autistic children in Khartoum State, Sudan. A step towards improving the well-being of less fortunate children

Autism is a neurodevelopment disorder which emerged as a major public health concern in the past decade in many countries. It is a lifelong disorder that begins in early childhood, first described by Kanner in 1943 [1]. Overt symptoms gradually begin after the age of six months, become established by age two or three years [2], and tend to continue through adulthood, although often in more muted form. It is distinguished not by a single symptom, but by a characteristic triad of symptoms: impairments in social interaction and communication; and restricted interests and repetitive behaviour [3]. Clinicians and researchers use the term Autism Spectrum Disorder (ASD) rather than autism. Autism is a complex disorder and researcher’s still debate whether the disorder is due to genetic defects, environmental factors or combinations of both [4-6].

Epidemiologic studies from the early 1990s estimated that one in 1,500 children had autism. In 2002, this number was one in 150 [7]. More recently, the Centers for Disease Control and Prevention reported the prevalence as 5.5 - 5.7 per 1,000 [8]. Prevalence rates are significantly higher today than in the past.

ASDs, similar to other neurodevelopment disabilities, are generally not “curable,” and chronic management is required [9], and because of their special care needs, daily care of autistic children is different from that of children with normal abilities. There is shortage of knowledge when dealing with dental conditions of children with AD and most of the research conducted on them is in developed countries [10].

There appear to be no known autism specific oral manifestations. Oral problems may arise because of autism related behaviors. Questions around dental caries rates among AD patients and the relation between them and rates of non-autistic patient are yet to be answered. Some studies indicate that AD as a behavioral problem should not be overlooked when considering risk for dental caries. Others claimed that using sweets as reward may affect their caries rates [11].

Desai et al, [12] reported that dental caries rates were higher in autistic children than others, whereas De Moor and Martens [13] , Fahlvik et al., [14] and Shapira et al. [15] all reported that there were no differences overall in dental caries levels between autistic and non-autistic children. Shapira et al. [15] did find that older autistic people had lower DMFT values than non-autistic individuals of the same age [15].

Past research efforts were targeting the enhancement of oral health among the general population. Though many factors influence an individual’s dental health, there is not enough evidence to show whether AD is a risk factor for caries and poor oral health. There are relatively few studies that are concerned with dental status and risk factors for caries in children with AD, and most of these studies were found in developed countries, with varying results. Our objectives are to determine caries levels among autistic children and compare it to that of non-autistic children.

For both groups data was collected using oral clinical examination and interviews of the children’s parents/ guardian.

Regarding the interviews; the children's parents/guardian were asked to participate in the study by answering questions asked by the researcher from a questionnaire. The following areas were covered in the questionnaire: demographic information such as child’s age (classified into primary dentition (3-6yrs), mixed dentition (7-12yrs) and permanent dentition (13-16yrs), gender and age of parents, educational level and occupational status of parents, time of joining the centre (for the autistic children only), dental health practices which included frequency of tooth brushing, type of tooth brush and tooth paste used, person responsible for brushing the child's teeth, dietary habits included frequency of sweet consumption, frequency of giving sweets as a reward. Frequency of dental visit and dental insurance were covered.

Oral clinical examination was done to assess dental caries using the Decayed-Missed-Filled Teeth index (DMFT), WHO criteria for caries detection was used [17]. The DMFT was recorded after examining all the teeth. The examination was carried out in classrooms using examination sets and torches.

The statistical analysis was performed using SPSS software (version11). All analyses were set at 95% confidence level with an alpha level of 0.05.

There was no significant difference between the autistic and non-autistic groups in study area (p=1.00), gender (p=0.891) and age (p=1.00) i.e. the two groups were comparable for these variables.

The mean DMFT of the non-autistic group was higher than that of the autistic group, 4.59 and 3.09 respectively. The difference between the two groups was significant (p=0.018) (Figure 2). 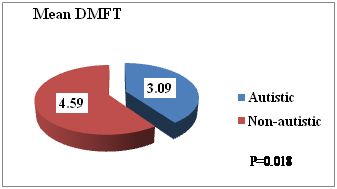 We conducted our cross-sectional study to generate a profile of the current DMFT among autistic individuals and to compare this profile with that of a group of unaffected individuals of the same area, age and gender. To our knowledge, this is one of few studies on the dental status of individuals with autism in Sudan.

Our study was composed of 132 individuals, 44 autistics and 88 non-autistics selected from private schools and centers in Khartoum, Bahri and Omdurman. The two groups were comparable considering study area, gender and age.

In our study 72.7% of the autistic group was caries positive and 83.9% of the non-autistic group. There was no significant difference between the two groups (p=0.170). This is comparable with many other studies, such as those provided by Lowe et al. [18], Kopel et al. [19] and DeMattei et al. [20] while the results of Cheen Y. Loo et al. [21], Kamen et al. [22] and Namal et al. [16] found that the caries prevalence in autistic patients was lower than in non-autistic patients and in contrast Desai et al. [12] found that children with autism had higher levels of dental caries when compared to non-autistic children.

The mean DMFT of the non-autistic group was higher than that of the autistic group, 4.59 and 3.09 respectively. The difference between the two groups was significant (p=0.018). This can be due to the difference in the sweets intake (p=0.013), parents assistance with teeth brushing (p=0.000) and possibly dental insurance (p=0.000). Other factors that may affect the difference between the two groups are frequency in brushing, tool of brushing, type of tooth brush and tooth paste used, frequency in fizzy drink consumption, using sweet as reward, but all these differences were found to be insignificant in our study.

Our results showed that there was no significant difference between the autistic and non-autistic group in the severity of dental caries, while Cheen Y. Loo et al. [21] found that the caries severity of autistic patients was significantly lower.

Our study showed that the majority of the autistic and non-autistic groups did not visit a dentist (75.0%) and (64.8%), respectively.

As many as 96.2% brushed their teeth once or more than once a day regularly which is much higher than in another study [16] were only 29.8% did. In our study the frequency of tooth brushing did not affect the dental caries level while other studies [16,24] found that children who brushed their teeth irregularly had greater caries experience.

There was a significant difference in the frequency of sweets intake between the two groups p=0.013. This may be due to the fact that the parents of autistic children control their sweet consumption.

Concerning the regular dental visits, there was no significant difference between the autistic and the non-autistic groups (p=0.226), but when compared with the dental insurance in the autistic group, there was significant difference in the regular dental visits among those who have dental insurance (40%) and those who don’t (12.5%) p=0.036.

©2015DosahAM. This is an open-access article distributed under the terms of the Creative Commons Attribution License, which permits unrestricted use, distribution, and reproduction in any medium, provided the original author and source are credited.

Table 5. Dental insurance and dental visits among the autistic group.

Table 6. Correlation between time of joining the center and DMFT.