Clinical, laboratorial, and epidemiological evaluation of patients bitten by Bothrops erythromelas in campina grande, Paraíba, Brazil, from June to December, 2009

Background: Blood tests like clotting time and bleeding time are tools that help physicians to predict snake envenomings and their management.

Methods: In this study patients bitten by Bothrops eryhtromelas in Campina Grande, Paraíba, Brazil were analyzed front of blood alterations. Clinical and epidemiological data of those individuals to design which cities show the majority of the accidents were also made.

Results: Pain was the most referred local manifestation by the individuals bitten by the snake B. erythromelas followed by edema. Four patients presented haemorrhage after envenoming returning to normal after treatment. The predominance among male aging between 20 to 30 years old shows that this age range is the most affected by snake bites. In this study was observed the prevalence of the agriculture activity and the rural area. Haemorrhage was the most systemic manisfestation observed in this study.

Conclusion: In the present study we verified the importance of evaluating hematological parameters on snake envenomings in accordance with clinical and epidemiological data.

Snake envenomings are a health problem mainly in rural areas of tropical and subtropical countries.  In Brazil occur almost 30.000 snake bites annually, resulting in more than 100 deaths (0,4%) [1]. In northeastern Brazil Bothrops erythromelas is the edemic species being responsible for 210 bites in Paraíba. People bitten by Bothrops erythromelas show local effects at the site of the bite like oedema, ecchymosis, blisters and necrosis; systemic manifestations like gengival bleeding, hematuria and epistaxis, as well as blood disturbances [2]. As B. erythromelas venom does not present miotoxic activiy [3] people bitten by this snake don’t present large necrosis at the site of the bite.

As most of envenomed individuals do not see the snake at the moment of the bite and also do not bring the species to the hospital, diagnosis is based on clinical features [4]. Those clinical features also help physicians to classify envenomation as mild, moderate or severe, which will drive the treatment [5]. Local swelling at the site, bleeding and shock are used as prognostic, although those features have not been tested rigorously [4].

Only two works immunologically evaluated individuals bitten by snakes. Barraviera et al. [6] analyzed 31 patients bitten by the snakes Crotalus durissus terrificus and Bothrops jararaca. In that work it was observed an increase of IL-6 and IL-8 in all patients on the first days after envenomation. Laboratorial data showed leukocitosis, leucopenia and neutrofilia. Ávila-Aguero et al. [7] analyzed children bittem by the snake Bothrops asper in Costa Rica and observed a marked raise on IL-6 and IL-8 on admission time, returning after 72 hours treatment. TNF-α showed a peak on 12 hours after admission. RANTES was increased in five patients.

Immunological evaluation after snake bites is not largely studied, as well as, not well known on individuals bitten by snakes. In this work we analyzed the involvement of IL-10, IFN-γ and NO for patients bitten by the snake Bothrops erythromelas in Norteastern Brazil.

The project that originated this paper was approved by the ethics committee of the hospital and all patients included in the study consent to participate. Third five patients admitted to the hospital in Campina Grande with clinical diagnosis of Bothrops envenoming were included in this study. After a clinical evaluation, patients were classified as mild, moderate or severe envenomed. The mild group was characterized by a local swelling, local bleeding and mild hemorrage; the moderate goup was characterized by more severe swelling, local bleeding and hemorrage; the sever group was classified as presented severe swelling, local bleeding and blisters, and severe hemorrage. In each group individuals received specific antivenom. The mild group received 4 vials of antivenom, the mild group recieved 8 vials and the severe group received 12 vials of antivenom (as prescribed by the Ministério da Saúde, 2001) [1]. The antivenom therapy was started as soon as possible to all individuals. Patients were studied as far as 48 hours after entrance at the hospital. In order to understand epidemiological features of Bothrops envenomation in PB, information of patients included: name, local of event, time, area (urban or rural), age, sex, as well as site of bite, type of snake, time between bite and entrance at the hospital, haemorrage, swelling, clotting time, platelets number, complete blood count, bleeding time, local necrosis and systemic bleeding.

Individual blood samples (20 ml) were collected by venipuncture on admission, 24 hours and 48 hours after envenomation. Blood coagulation time was assessed using two tubes incubated 30 minutes total at 37°C. Platelets were counted electronically in a automatized system (Counter 19 – Wiener Lab). It is important to clarify that CDC and number of platelets were performed only under medical prescription.

Epidemiological evaluations is a transversal study using indirect documentation on snake envenomations attended in Campina Grande from June to December, 2010. All include patients presented medical diagnosis for Bothrops envenomation. Data were collected from the notification sheets of the Poison Information Center of Campina Grande.

Total whole blood cell counting (TWBCC) was not possible to analyze statistically once not all patients had this parameter prescribed by the physician. As TWBCC is not predictable for envenomation, physicians prescribe it only in severe cases were patient’s life is at risk. However, this is an important parameter to evaluate, for example, to know the type of leucocytes involved in this envenomation before and after treatment.

Epidemiological analysis was carried out in order to evaluate important parameters as local of occurrence of the accident, like rural or urban areas, city of occurrence, sex, age, local of the bite, number of vials used for treatment and time between bite and hospital admission.

The city of Campina Grande is located on Paraíba State, composed by 379.871 people, 46,8% men and 53,2% women [8]. The city is a converge pole, with around 232 neighbors cities, which drive to Campina Grande searching for services offered, including health services [9].

This study took place with help of the Poison Information Centre (CEATOX-Campina Grande), a service offered by the Pharmacy Department of the State University of Paraíba (UEPB) with the partnership of the Regional Hospital of Campina Grande.

Clinical evaluation of all patients was performed by the medical staff of the hospital.

This study was approved by the Ethics Committee of the Centro de Pesquisas Aggeu Magalhães/FIOCRUZ, Recife.

Platelet count was as their lowest in only three patients as follows: two mild and one severe envenomation. This data do not corroborate other studies [10] which claims that thrombocytopenia is a marked statistically significant process developed on envenomations by Bothrops species. 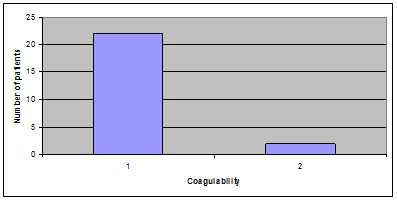 Table 1 shows the characterization of snake envenomations attended and notified at the CEATOX-PB, following social and demographic variables. When age of patients was evaluated, it was a greater frequency for 20-30 years old group (25%). When age was evaluated it was observed that male was the gender the most affected (89,28%).

Bites occurred from June to December even though irregularly (Figure 2) and the city with most notifications was Taperoá (3 cases) (data not shown).

Figure 2. Distribution of Bothrops erythromelas bites according to seasonality – from June to December, 2009.

Accidents classified as mild envenomation were the most observed (50%) as we can observe by the number of antivenom vials used (Figure 3). 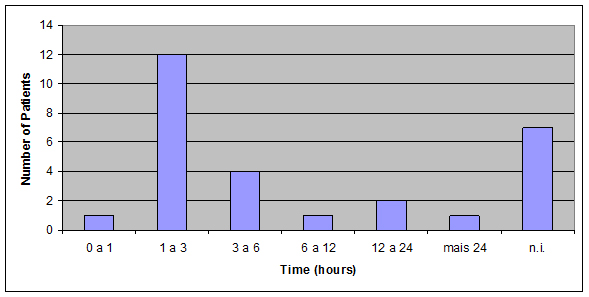 Most patients reached the hospital care into the 3 first hours after envenomation (46,42%) (Figure 3).

Pain was the most referred local manifestation, in 22 patients, followed by edema. Systemic disorders were observed like hemorrhage [4] and head ache [7].

Simple coagulation tests can be used to diagnose systemic envenoming and control the antivenom doses [14]. This study we observed 81,4% of patients presenting prolonged clotting time (data not shown), which corroborate with other studies [10,15,16], as it is known that Bothrops venoms has the ability of activate blood coagulation [14].

Envenomation inflicted by snakes of the Viperidae family is usually characterized by prominent local effects such as necrosis, haemorrhage, edema and pain [17,18]. Those effects, however, are not well neutralized by the antivenom used [11,19], even though, they are the only effective treatment for snake bite envenomation [20].

In the present study we observed that pain was the most referred local manifestation by the individuals bitten by the snake B. erythromelas (Figure 1), followed by edema (Figure 2). These data corroborate with other studies, either experimental [19,21] or with humans [1,11,22].

There is a high quantity of components on Bothrops venoms that compromise haemostasis. So that it is common a high frequency of bleeding caused by this type of envenomation. Those bleedings can be distinguished as local and systemic [13]. In the majority of the cases bleeding is stopped after antivenom therapy, although some brain bleeding has been related in some cases which can lead patient to death [23].

In the present study 4 patients presented haemorrhage after envenoming returning to normal after treatment. All 4 patients were classified as moderate or severe envenomation and the type of haemorrhage was epistaxis and gingival haemorrhage.

The predominance among male aging between 20 to 30 years old shows that this age range is the most affected by snake bites. These data may indicate the insertion of young men in the work more than women. The Brazilian Ministry of Health data (2003) [24] show that in 52,3% of notifications the prevalence is for 15 to 49 years old, which correspond to the work force. Male were the most exposable to this injury with 70% of the bites (Table 1).

In this study was observed the prevalence of the agriculture activity and the rural area. In Northeast region of Brazil it is observed a greater activity in the planting and harvest periods (Table 2). So that it may have a correlation between the frequency of snake bites and the period for planting and harvest [9]. Those inferences reinforce the fact that snake bites as a work accident. Furthermore, these data confirm the results obtained by Kastiriratne et al. [25] who related that all over the world rural activity is a risk factor for snake bites.

Seasonality for snake bites must be taken as an important fact which can drive educational prevention. In Southern and South of Brazil snake accidents usually occur from October to April which is the most warm and rainy period of the year for those regions (Brazil, 2003) [24]. In Northeastern the accidents occur mostly between May and September with decay after October [9].

Victims were most affected in the inferior members as feet and finger feet. [22] and [26] also related feet (43,1%) as the most affected region of the body. So that the use of protection equipments as gloves and boots are indicated (Table 3).

The most clinical features observed in this study were pain and edema. It is well known that Bothrops evenomings are characterized by pain, edema, haemorrhage, local necrosis, ecchimosis, blisters [1,2] (Table 4).

Haemorrhage was the most systemic manifestation observed in this study, as also related by other authors [10,28] followed by headaches. This haemorrhage was soon stopped after antivenom therapy, except for one patient who presented epistaxis and remained bleeding for more 2 days after treatment (Table 5).

In the present study we verified the importance of evaluating hematological parameters on snake envenomings in Northeastern Brazil, specially on Bothrops envenomation. These data will allow us to better understand the variations on the different envenomings as well as to design better approaches on new therapies.

Also, epidemiological data can lead us to corroborate with a more accurate notification for this type of health problem.

©2015 Oliveira Luna KP. This is an open-access article distributed under the terms of the Creative Commons Attribution License, which permits unrestricted use, distribution, and reproduction in any medium, provided the original author and source are credited.

Figure 2. Distribution of Bothrops erythromelas bites according to seasonality – from June to December, 2009.