Hepatoid adenocarcinoma of the lung (HAL) is a rare clinical entity that accounts for only 5% of hepatoid adenocarcinomas. Twenty-four cases of HAL have been documented in the medical literature, and the majority of cases share the following features: male predilection, history of smoking, large primary lung mass, advanced disease at presentation, poor prognosis, and elevated alpha-fetoprotein (AFP) serum levels.

We present a middle-aged male with locally advanced HAL who had normal serum AFP levels at the time of diagnosis, and whose recurrent tumor was not immunoreactive for AFP. Molecular testing for anaplastic lymphoma kinase (ALK) and epidermal growth factor receptor (EGFR) was unremarkable.

To our knowledge, this is the third case of HAL to have normal serum levels of AFP and to not have positive AFP immunostaining. Moreover, this is the second case of HAL with a concurrent colon adenocarcinoma, but the first such case to have serum and immunohistochemical findings unremarkable for AFP. It is important to raise awareness of HAL in order to aid clinicians in distinguishing it from metastatic hepatocellular carcinoma (HCC). Given the poor prognosis of HAL, molecular testing should be utilized by clinicians to explore targeted treatment options. Specifically, ALK rearrangement and crizotinib therapy has been documented in an AFP-negative HAL. Lastly, clinicians should be familiar with the histological characteristics that discriminate HAL from HCC and know that the diagnosis of HAL does not require elevated AFP serum levels or immunohistochemical evidence of AFP.

Hepatoid adenocarcinoma is an extrahepatic tumor with hepatocellular differentiation that most commonly occurs in the stomach [1]. Hepatoid adenocarcinoma of the lung (HAL) is a rare clinical entity that accounts for only 5% of hepatoid adenocarcinomas [1]. Twenty four cases of HAL have been documented in the medical literature, and the majority of cases share the following features: male predilection, history of smoking, large primary lung mass, advanced disease at presentation, poor prognosis, and elevated serum levels of AFP [2-5].

HAL was first defined as a clinical entity by Ishikura et al. in 1990 [6]. To meet Ishikura et al.’s diagnostic criteria for HAL, tumors must produce alpha-fetoprotein (AFP) and contain acinar or papillary adenocarcinoma as well as components with morphological resemblance to hepatocellular carcinoma, such as trabecular proliferation, eosinophilic cytoplasm, and hyaline globules [6]. Recently, Haninger et al. suggested modifying the diagnostic criteria for HAL by expanding the histological tumor composition needed for diagnosis and making AFP expression not requisite for diagnosis as long as other markers of hepatic differentiation are expressed [2].

Herein, we present a case of locally advanced, HAL in a middle-aged white male with a 30 pack-year smoking history. Most notably, this patient had a coexisting colorectal adenocarcinoma along with a normal AFP serum level at the time of diagnosis and AFP-negative immunostaining of his recurrent HAL tumor. This is the first case of HAL to have a coinciding colorectal adenocarcinoma along with serum and immunohistochemical findings unremarkable for AFP.

A PET scan demonstrated the previously described tumors but found no evidence of malignancy in the liver. Serum alpha-fetoprotein (AFP) was 2.6 ng/mL (.5 – 9 ng/mL), and serum carcinoembryonic antigen (CEA) was 18.96 ng/mL (0 – 5 ng/mL). The lung cancer was clinically staged as IIIB (cT4cN2). Elevated CEA was expected given the low grade colon adenocarcinoma, but the normal AFP serum level did not correlate with the hepatocellular differentiation of the lung tumor. A subsequent MRI of the liver was unremarkable which supported the diagnosis of hepatoid adenocarcinoma of the lung as opposed to metastatic hepatocellular carcinoma.

The patient was treated with chemoradiation involving 7 cycles of weekly carboplatin AUC 2 and paclitaxel 50 mg/m2 in conjunction with 70 Gy of external beam radiotherapy delivered via an intensity modulated radiation therapy (IMRT) technique. A chest CT scan prior to the final cycle of chemotherapy revealed the lung mass had decreased in size to 5.5 cm x 6.1 cm while the involved lymph nodes had remained stable.

Following neoadjuvant therapy, the lung mass was resected with negative margins. All 17 sampled lymph nodes were negative for metastasis; therefore the tumor was pathologically staged as IIB (ypT3N0). Histology of the tumor revealed moderately differentiated adenocarcinoma with both morphologic and immunophenotypic evidence of hepatocellular differentiation and only minor component of acinar adenocarcinoma (Figure 1). No tissue staining for AFP was done at that time. 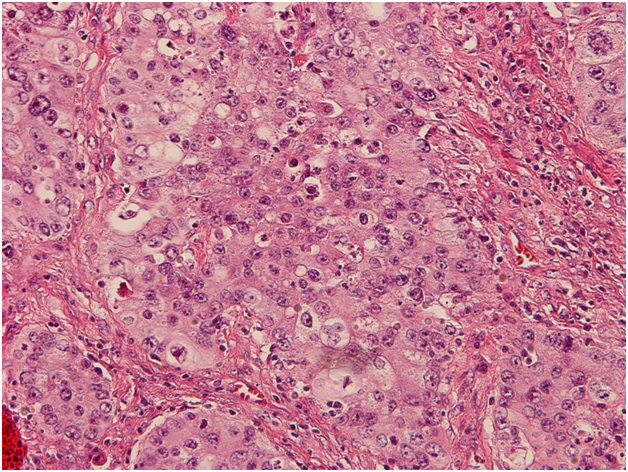 Following surgery, the patient had 2 cycles of adjuvant chemotherapy consisting of cisplatin and paclitaxel followed by 30 Gy of adjuvant radiation to the chest wall utilizing IMRT. Subsequent colonoscopy showed no residual malignancy, and a CT of the chest, abdomen, and pelvis was not concerning for malignancy. One year following completion of adjuvant treatment, the patient presented with chest wall pain, and a PET/CT revealed a 4.2 cm x 5.6 cm x 6.5 cm left anterior chest wall mass consistent with recurrence and multiple FDG-avid hilar and mediastinal lymph nodes. There was no evidence of distant metastatic disease. The chest wall mass was resected and found to be recurrent adenocarcinoma from the lung primary. Immunostaining confirmed the tumor was negative for AFP (Figure 2).

Similar to the previously reported cases of HAL, our patient was a male with a smoking history who presented with a large tumor, had advanced disease, and whose tumor recurred following aggressive therapy. However, a unique feature of this case of HAL was its unremarkable AFP findings when examining the serum level and immunohistochemistry. To our knowledge, this is only the third reported HAL case with a normal serum level of AFP and AFP-negative immunostaining [2,3].

An unfortunately defining characteristic of HAL is the dismal prognosis of the disease. The majority of HAL cases share the poor prognostic factors of large primary tumor, advanced stage at presentation, high risk of recurrence, vascular endothelial growth factor (VEGF) expression, vascular invasion, and frequent hepatic metastases [6,7]. Most literature suggests that stage at presentation is the most important prognostic factor for HAL [8,9]. Additionally, three cases reported by Hiroshima et al. showed that AFP-positive immunostaining lung carcinomas had significantly more proliferative activity than those that did not stain for AFP, which suggests AFP expression might also be an important prognostic factor [10].

Given the poor prognosis and aggressive nature of HAL, molecular testing should be utilized by clinicians to explore targeted treatment options for HAL cases, especially those involving synchronous or refractory tumors. Notably, one previous case of HAL had the ALK gene rearrangement and responded briefly to crizotinib [3]. Our patient’s tumor was negative for the ALK translocation and EGFR mutations, so no targeted therapies were used.

Lastly, it is important to note the histological characteristics that discriminate HAL from metastatic hepatocellular carcinoma (HCC). A 14-marker immunohistolchemical panel was created by Haninger et al. in order to aid in this process [2]. In the 5 cases examined by Haninger et al., only HAL was found to stain for CK5/6 (1/5), CK7 (3/5), CK19 (4/5), CK20 (1/5), HEA125 (5/5), MOC31 (5/5), monoclonal CEA (3/5) and napsin A (1/5) [2]. Our patient’s tumor only stained positive for CK7 in addition to characteristic markers of hepatocellular differentiation (HepPar1, HSP-70, and glypican-3). Therefore, this panel did not significantly aid us in distinguishing HAL from HCC.

In sum, we believe our diagnosis of HAL is supported by the immunohistochemical evidence of hepatic differentiation along with the morphologic features that mimic HCC, the lack of clinical or radiologic evidence of a liver tumor, and the fact that our patient had no history of HBV, HCV, or cirrhosis. We hope this report raises awareness of HAL and aids clinicians in distinguishing it from metastatic HCC. Given the poor prognosis of HAL, molecular testing should be utilized by clinicians to explore targeted treatment options. Specifically, the ALK rearrangement and crizotinib therapy has been documented in an AFP-negative HAL. Lastly, clinicians should be familiar with the histological characteristics that discriminate HAL from HCC and know that the diagnosis of HAL does not require elevated AFP serum levels or immunohistochemical evidence of AFP.

We thank all of our colleagues who helped us in the care of the patient. Additionally, the authors report no relevant conflict of interests and have no relevant funding sources to report.

©2016Gutschenritter T.This is an open-access article distributed under the terms of the Creative Commons Attribution License, which permits unrestricted use, distribution, and reproduction in any medium, provided the original author and source are credited.