Active hexose correlated compound (AHCC) is a mixture of glucan-rich polysaccharides isolated from the culture extract of shiitake mushroom mycelium. Multiple bioactivities, including immune regulation, have been reported in both basic and clinical studies. This compound has also been used as an adjunct treatment for cancer, but no study has examined whether AHCC can alter the metabolism of therapeutic agents, such as anticancer drugs, in the liver by altering the expression of drug-metabolizing enzymes. Here, we assessed AHCC-induced changes in the expression of genes encoding drug-metabolizing enzymes using a DNA microarray.

Oral administration of AHCC to healthy mice altered the expression of multiple genes in the liver, including slight upregulation of drug-metabolizing enzymes and marked suppression of genes involved in tumor necrosis factor signaling and apoptosis. Thus, AHCC may protect liver function against the adverse effects of anticancer agents, such as inflammation, while having little effect on drug metabolism.

Liver metabolism is a critical factor influencing the Absorption, Distribution, Metabolism, and Excretion (ADME) of clinical drugs, thereby influencing their efficacy. Metabolizing enzymes belong to two groups: Phase I mediating oxidation and reduction, and Phase II mediating conjugation [1]. If these metabolizing enzymes are strongly induced or suppressed by other bioactive compounds, such as in food, dietary supplements, or adjunct treatments, primary drug absorption and bioavailability can be substantially altered, resulting in adverse drug−drug interactions. Therefore, the effects of bioactive compounds in food, dietary supplements, and herbal medications on drug metabolizing enzymes must be determined for the evaluation of potential interactions [2].

Active hexose correlated compound (AHCC), a popular nutritional supplement found in the culture extract of shiitake mushroom mycelium, has been shown to alter the expression of hepatic drug-metabolizing enzymes, including the induction of CYP2D6 [3]. Alternatively, there are no detailed reports on the ADME effects of AHCC following oral intake. If polysaccharides are the main bioactive ingredients of AHCC, then changes in liver function are possible as many polysaccharides can be absorbed and transported to the liver intact. We comprehensively analyzed the gene expression changes in the liver following oral administration of AHCC using DNA microarrays to assess the potential for altered drug metabolism in vivo.

DNA microarrays have found wide applications in disease diagnosis, detection of bacteria and viruses, and analysis of polymorphisms [4]. As it is difficult to analyze all gene expression changes and possible associations with biological functions, we narrowed down the target genes using focused DNA microarrays; Genopal® (Mitsubishi Rayon. Co., Ltd., Tokyo, Japan). Each of these microarrays contain approximately 200 gene probes within functional groups and detect gene expression changes with high reliability [5-7].

Six-week-old ICR male mice were purchased from Charles River Japan, Inc. (Kanagawa, Japan). They were housed in individual cages under a 12-h light–dark cycle at 23 ± 1°C and 55 ± 15% humidity. After 1 week of acclimation, the mice were divided into two groups (n = 5 per group), a Normal group and a 3% AHCC group. The Normal group had ad libitum access to water while the 3% AHCC group had ad libitum access to the 3% AHCC aqueous solution. At the end of the experiment, the animals were sacrificed using ether anesthesia to obtain liver samples for gene chip analysis.

This study conformed to the Guiding Principles for the Care and Use of Experimental Animals of Hokkaido Pharmaceutical University (published 1998, revised in 2001 and 2007). The protocol approval number is H27-010.

cDNA was prepared from the RNA, and biotin-labeled RNA was transcribed and amplified using a MessageAmp biotin-enhanced amplification kit (Applied Biosystems Japan, Tokyo, Japan), according to the manufacturer’s instructions. Biotinylated amplified RNA (aRNA) was fragmented using fragmentation reagents (Applied Biosystems Japan) and then incubated at 94°C for 7.5 min. The fragmentation reaction was terminated by the addition of kit stop solution.

The special Genopal® chips used for DNA microarrays were the Metabolic Chip containing probes for 195 genes and the Oxidative-stress Chip containing probes for 219 genes. The genes detected by the Metabolic Chip include those encoding Phase I cytochrome P450 (CYP) species and Phase II glutathione S-transferase (GST) isoforms. Thirty-six detected genes are involved in drug metabolism as shown in Table 1.

Results are expressed as means ± standard error of the mean (S.E). Group means from plasma chemical analyses were compared by analysis of variance followed by pair-wise Student’s t-tests. For analysis of DNA microarrays, a 2.0-fold change in expression, as measured by the signal intensity ratio (SIR, log2 [Sample Signal intensity/Control Signal intensity]), was interpreted as differential expression.

The predicted target genes were compared against the Database for Annotation. We performed pathway analysis for DEGs based on the latest Kyoto Encyclopedia of Genes and Genomes database (KEGG, http://www.genome.jp/kegg). This analysis allowed for determination of biological pathways significantly enriched in DEGs [8].

There were no significant changes in plasma levels of TG, T-Cho, GLU, AST, and ALT between Normal controls and 3% AHCC-treated mice (Table 2). 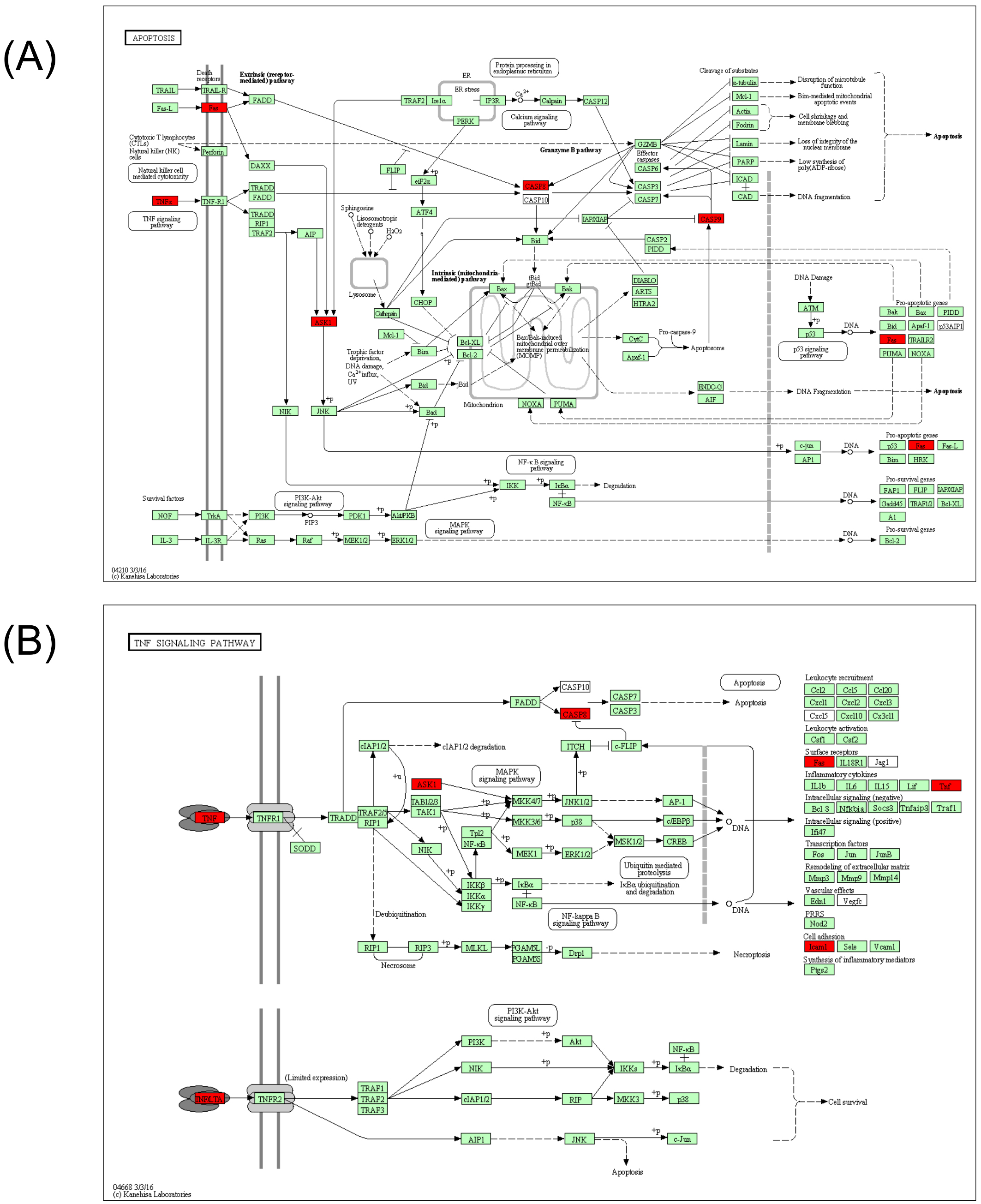 Figure 4. Pathways analysis from KEGG database. According to pathways analysis, two pathways, which are involved in apoptosis (A) and TNF (B) signaling, were downregulated (red collar) by 3% AHCC administration.

Active hexose correlated compound is used as a traditional medicine in Asia and its use as a nutritional supplement around the world is increasing. There are many reports on the bioactivity and pharmacological benefits of AHCC in mice and humans. Reported benefits include prevention of the adverse effects of anticancer agents [9,10], immunomodulation [11], anti-influenza effects [12], and protection of hepatocytes [13]. In the present study, we found no changes in plasma biochemical indices, in particular those for hepatotoxicity, in mice allowed to freely consume 3% AHCC over 5 days. This finding is in agreement with previous reports on AHCC safety that found no severe toxicity or adverse effects in healthy rats (single-dose or subacute toxicity) and human subjects in a phase I study [14]. Further, AHCC dramatically suppressed genes involved in two major cellular toxicity pathways, TNF signaling and apoptosis, but had only modest effects on liver metabolic enzymes. These expression changes may in part account for the reduction in inflammation and cytoprotection observed in previous studies.

DNA microarrays can be used for comprehensive analysis of gene expression, but gene expression changes may not parallel downstream protein expression changes and associated signaling. Nonetheless, the powerful suppression of TNF- and apoptosis-related genes strongly suggests that disruption of these pathways underlies the cytoprotective effect of AHCC. Moreover, we provide evidence for the utility of Genopal® microarrays for nutri-genomics, Indeed, these DNA microarrays facilitated efficient functional analyses of genes associated with specific pathways.

The Metabolic Chip used in this study includes 36 DNA probes for detecting phase I and II enzymes, including multiple cytochrome P450 (CYP) species and glutathione S-transferase (GST) families. Among them, only two drug metabolism-relevant genes, CYP3A11 and CYP7A1, were induced in the AHCC group, and the magnitudes were both relatively small (both SIRs close to +1). Mouse CYP3A11 is homologous to the human liver metabolizing enzyme CYP3A5, an enzyme involved in the metabolism of immunosuppressive agents such as tacrolimus [15] and thus a major determinant of efficacy and drug−drug interactions involving these agents. CYP7A1 is known to be the rate-limiting enzyme for catabolism of cholesterol to bile acid [16]. However, we found no significant effects on plasma T-Cho, possibly because the upregulation was modest. These results suggest minimal likelihood of adverse events from combination treatments including AHCC.

Moreover, our analyses using the Oxidative-stress Chip (containing probes to identify 219 genes) identified five genes dramatically suppressed (SIR <−10) by oral AHCC (BCL10, BCL6, ICAM1, MAP3K5, and CASP9). BCL10 is involved in the release of inflammatory cytokines such as TNFα and interleukin (IL)-1β through NF-κB signaling [17]. MAP3K5, otherwise known as Apoptosis Signal-regulating Kinase 1 (ASK1), has been reported to play a major role in inflammation, oxidative stress, oncogenesis, and apoptosis [18]. AHCC also suppresses Apo-1/CD95 (Fas, SIR ＝ −2.7) (data not shown) as well as CASP9, suggesting that it functions as a strong suppressor of apoptotic induction in the liver [19]. Moreover, ICAM1 is associated with inflammation of the vascular endothelium [20] while BCL6 is involved in the differentiation and mutual adhesion of immunocytes [21].

Collectively, these results provide possible molecular mechanisms for the anti-inflammatory and hepatoprotective effects of AHCC. On the other hand, Mallet et al. [22] reported that TLR2 and TLR4 function as AHCC ligands, suggesting that AHCC may activate innate immunity. However, we found that AHCC also suppressed ASK1, which is downstream from TLR4. Thus, the effects of AHCC on immune function may depend on the current immune status of the host.

The authors declare that they have no competing interests

©2016 Wakame K. This is an open-access article distributed under the terms of the Creative Commons Attribution License, which permits unrestricted use, distribution, and reproduction in any medium, provided the original author and source are credited.

Figure 4. Pathways analysis from KEGG database. According to pathways analysis, two pathways, which are involved in apoptosis (A) and TNF (B) signaling, were downregulated (red collar) by 3% AHCC administration.