Diffuse large B-cell lymphoma of the gingiva mistaken for medication-related osteonecrosis of the jaw (MRONJ): A case report

The benefits of oral antiresorptive therapy (formally referred to as bisphosphonates) for patients diagnosed with osteoporosis and osteopenia are the cornerstone in the medical management of these patients. However, antiresorptive therapy is not without adverse side effects. For the dental practitioner, there has been an increase in the number of reported cases of medication-related osteonecrosis of the jaws (MRONJ) since 2003. It is important to realize that the clinical features and radiographic findings are not pathognomonic for MRONJ. Malignant lesions can mimic MRONJ both clinically and radiographically. The diagnosis of all malignant lesions is accomplished only by biopsy confirmed histopathology.

In this article, we describe a case of diffuse large B-cell lymphoma (DLBCL) which was mistaken for a medication-related osteonecrosis of the jaw (MRONJ).

Medication-related osteonecrosis of the jaw (MRONJ) may often appear as the correct diagnosis based on the patient's medical history and clinical presentation. However, clinicians must always formulate a differential diagnosis, which should include malignant conditions. This case report shows the critical importance of an accurate diagnosis which was a malignancy.

Osteonecrosis of the jaws is a commonly reported side effect with patients prescribed oral anti-resorptive medications (formerly known as bisphosphonates) to treat osteoporosis and osteopenia [1,2]. Oral antiresorptive agents are considered the standard of care for the prevention and treatment of women with postmenopausal osteoporosis and are the most widely prescribed medications for this skeletal disorder [1-4]. Oral medications approved by the United States Food and Drug Administration (FDA) include the following antiresorptive agents: Alendronate sodium (Fosamax; Merck & Co., Inc.; Whitehouse Station, NJ); Risedronate sodium (Actonel, Warner Chilcot, Dublin) and Ibandronate sodium (Boniva, Roche Group, South San Francisco). Each medication differs in its binding affinity to bone, potency and duration [5-9].

Systemic adverse effects reported with the medications include esophagitis, nausea, vomiting, bone and muscle discomfort and most recently, atypical femoral subtrochanteric fracture [10-13]. The most common side effect of concern to the dental community is an osteonecrosis of the alveolar bone that can occur in both the maxilla and mandible after an operative procedure [2,14-17]. For the clinician, it is important to realize that the definitive diagnosis of this condition can be missed entirely or delayed, as the clinical features and radiographic findings may not appear early in the course of the disease process. Many signs and symptoms of MRONJ are nonspecific (Stage 0) and most important, are not pathognomonic for MRONJ [18- 20]. This includes exposed bone, which is a clinical characteristic of MRONJ [2,14-17]. Furthermore, malignant lesions can mimic MRONJ both clinically and radiographically. The diagnosis of all malignant lesions is accomplished only by biopsy confirmed histopathology. In this article, we describe a case of diffuse large B-cell lymphoma (DLBCL) which was mistaken for a medication-related osteonecrosis of the jaw (MRONJ).

Medication-related osteonecrosis of the jaws (MRONJ)

Marx and Stern (2003) reported 36 cases of necrotic jawbone infections that resembled osteoradionecrosis (ORN) after an oral surgical procedure, most commonly extraction of teeth. In 2004, Ruggiero et al. reported 63 cases of avascular necrosis of the jaws that were similar to what Marx had initially reported a year earlier. Since these two initial reports, others have reported the following clinical features of MRONJ that may vary between patients: vague pain or no pain with non-specific clinical findings of sensitivity of the jaws and teeth; no healing or delayed wound healing; acute and chronic soft tissue infections that resembled periodontal abscesses, non-healing surgical sites, bone pain, dehiscence with exposed bone with or without pain, mobility of teeth; foul taste in the oral cavity; inflammation of the surrounding soft tissues; purulent draining soft tissue fistulas, soft tissue edema, orocutaneous fistulas and neurosensory changes of the lip and pathologic fracture of the mandible. Of the various observed clinical findings, all patients present with a localized soft tissue pathology, such as a periodontal infection. [2,16,17,21-26]. In the early stages of MRONJ, there may be little to no obvious changes to the bony architecture of the jaws in periapical, panoramic radiographs and even computed tomography scans [16,17,27]. As MRONJ toxicity of the alveolar bone progresses over time and with the development of exposed bone and the presence of microorganisms, an increase in bone mineral density indicative of antiresorptive toxicity may be observed. Sclerosis of the lamina dura around the roots of the teeth and widening of the periodontal ligament space are other radiographic signs of toxicity to the alveolar bone. In advanced cases of MRONJ, osteolysis, sequestration of bone and pathologic fracture has been reported [15-17,27].

Non-Hodgkin’s lymphoma (NHL) is a broad term for a wide range of lymphocytic cancers that arises predominantly within the lymph nodes. However, 24% of lymphomas may assume extranodal sites, such as the gastrointestinal tract, testes, thyroid gland, breast, skin, bones, and Waldeyer’s ring of the palate [28-30]. Of the different variants of NHL, diffuse large B-Cell lymphoma (DLBCL) is the most common worldwide [31,32]. DLBCL is an aggressive lymphoma that can develop in the lymph nodes, or outside of the lymphatic system (extranodal) and requires immediate treatment. It accounts for nearly 30% of all newly diagnosed lymphoid malignancies in the United States [31-33]. DLBCL is most frequently observed in adults, but can occur in children. The incidence ranges from 10-88 years (median age 57 years). Initial signs and symptoms of DLBCL frequently appear as a painless, rapidly developing swelling in the neck, armpit or groin due to enlarging lymph nodes [31-33].

NHL of the oral cavity is relatively rare, as the worldwide incidence ranges from 0.1% to 5% [30,34-38]. Anatomic structures such as the jaw bones, gingiva, buccal vestibule, floor of mouth and salivary glands may be affected [28,34,36-43]. Often times, the lesion may mimic an acute or chronic inflammatory process, such as swelling of the gingiva, a periodontal infection, and periapical radiolucencies [30,44-46]. Clinical signs and symptoms of the oral cavity may include pain, swelling, ulceration of soft tissues, neurosensory deficits involving the maxillary and mandibular branches of the fifth cranial nerve and pathologic fracture [28-30,34-46].

A 90-year old Asian female was referred by a periodontist for evaluation and treatment of a periodontal abscess of the right posterior mandible that was refractory to antibiotic therapy and osseous debridement over a 3 month period. The gingival lesion continued to increase in size, as well as the pain. The patient’s past medical history was significant for osteoporosis. She had been taking Fosamax (Merck, Whitehouse Station, NY) for over 10 years. Physical examination was negative for lymphadenopathy or neck masses. Oral examination of the right posterior mandible revealed buccal and lingual gingival edema and erythema around teeth #29 and 30 (Figure 1). Exposed bone was not observed. Imaging studies consisting of a panoramic radiograph demonstrated a diffuse radiolucency around the roots of teeth #29 and 30. A cone beam CT scan (CBCT) with three dimensional (3D) reconstruction was obtained and demonstrated extensive osseous destruction around the roots of teeth #29 and 30 (Figure 2).

Based on the patient’s clinical presentation and poor response to periodontal treatment, the decision was made to biopsy the abnormal appearing gingival tissue surrounding tooth #29. Incisional biopsy was performed under local anesthesia and histological examination revealed many atypical large lymphocytes with prominent nucleoli (Figure 3A). Immunohistochemistry was positive for CD 20 and PAX-5 markers consistent with a diagnosis of diffuse large B cell non-Hodgkin’s lymphoma (Figure 3B). The patient and her family were informed of the diagnosis and she was referred to a medical oncologist for definitive treatment. Formative staging during the work-up included bone marrow aspiration, blood and chemistry panels, computed tomography of the thorax and abdomen, and nuclear medicine studies of the skeleton which were all normal. Clinical staging was thus, determined to be IAE (Ann Arbor Staging System) [47]. 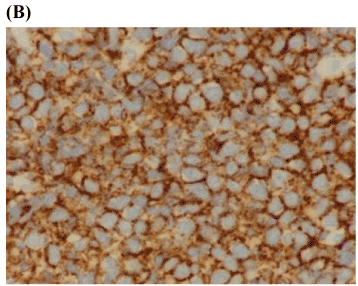 A literature search regarding MRONJ mimicking malignancies revealed only 3 published articles [19,20,48]. The authors [19,20] reported on 3 cases where conservative treatment was initiated based on the clinical and radiographic findings. The definitive diagnosis of malignancy was obtained only after histopathologic examination. Clinicians must be acutely aware that the clinical presentation and radiographic features suggestive of osteonecrosis due to antiresorptive medications are nonspecific and not only diagnostic of MRONJ [18-20,49].

After squamous cell carcinoma, lymphoma is the second most common neoplasm of the head and neck, but is considered rare in the oral cavity [30,34-38]. It is for this reason that lymphoma can be difficult to diagnose. Therefore, with any gingival swelling that presents as a periodontal infection with osseous involvement, lymphoma should be considered in the differential diagnosis of the lesion, especially if refractory to treatment.

What made this case confusing and contributed to a delay in the definitive diagnosis is that the gingiva is not a commonly observed extranodal site in non-Hodgkin’s lymphoma and case reports are few [50-55]. As discussed, MRONJ has a variable presentation, including periodontal infections and edema and erythema of the gingival tissues. Furthermore, the patient’s medical history of osteoporosis and long-term treatment with Fosamax continues to be a main stream topic in dentistry and medicine since the initial reports by Marx (2003). Although biopsy is not recommended in the management of MRONJ [16,17]. the authors of this paper do not agree with this recommendation based on past clinical experience. We therefore recommend histologic examination of all lesions that fail to heal with conventional treatment [18-20].

Dentists must be acutely aware that malignant lesions, such as extranodal lymphoma should be part of the differential diagnosis. More important, gingival infections may mimic soft tissue lesions observed in MRONJ. If the definitive diagnosis is in doubt, biopsy of the lesion is indicated. Failure to biopsy the lesion for a definitive diagnosis in timely manner will delay the initiation of oncological treatment and possibly patient survival. This article emphasizes the importance of accurate diagnosis of diffuse large B-cell lymphoma.

The authors declare no potential conflicts of interest with respect to financial funding, research, authorship and publication.

©2015 Lee CYS. This is an open-access article distributed under the terms of the Creative Commons Attribution License, which permits unrestricted use, distribution, and reproduction in any medium, provided the original author and source are credited.