Discovery of a novel effect of electric field exposure on human plasma beta-endorphin and interleukin-12 levels: Insight into mechanisms of pain alleviation and defense against infection by electric field therapy

A therapeutic device to expose the human body to high-voltage electric potential (HELP) was approved by the Ministry of Health, Labour and Welfare in Japan [1-3]. High-voltage electric field (EF) therapy is reported to be an effective treatment for stiff shoulders, constipation, insomnia, and headaches [1-9]. Although the mechanisms of EF therapy are largely unknown, previous attempts to find an EF exposure-induced biomarker using non-targeted plasma metabolomics have led to the detection of the endogenous signaling molecule oleoylethanolamide (OEA), a putative agonist of multiple proteins, including peroxisome proliferator-activated receptor-alpha (PPAR-α), G protein-coupled receptor (GPR) 119, GPR55, and the transient receptor potential vanilloid 1 (TRPV1) [10]. Endogenous peptide hormones have been suggested as candidate molecules that may represent an interface between symptoms and therapeutic target proteins. A recent study by Lauffer et al. reported that OEA increased GLP-1 secretion from intestinal enteroendocrine L-cells [11]. The observations of Lauffer et al. led us to study the effect of HELP exposure on peptide hormone levels [11]. In this study, we investigated the levels of several peptide hormones using ELISA on plasma samples obtained from healthy subjects before and at different times (0, 15 or 45 min) following exposure to a single HELP stimulation. Here we report that plasma β-endorphin levels can be up-regulated by HELP exposure. To elucidate the mechanisms leading to the changes in β-endorphin levels, we examined the effect of DGLA in human keratinocytes, and showed that it induces the secretion of β-endorphins.

The system used for EF exposure has been previously described [9-10]. The EF system was equipped with a transformer, a seat, and two insulator-covered electrodes; one electrode was placed on a floor plate on which the subject’s feet were located, and the other was above the head of the subject. EF generated by the HELP apparatus (Healthtron PRO-18T or HES-A30; Hakuju Institute for Health Science Co., Ltd., Tokyo, Japan) was created uniformly by a transforming 50 Hz alternating current at 18 kV or 30 kV. The safety of this system for human use was established by the Japanese government in 1963.

Blood samples were collected in vacutainer tubes coated with ethylenediaminetetraacetic acid (VP-NA070K; Terumo Corporation, Tokyo, Japan) and immediately centrifuged at 800 × g for 5 min using a centrifuge to separate plasma from other cellular materials. Subsequently, plasma was transferred to a fresh eppendorf tube and stored at -80°C until processed.

Human epidermal keratinocytes (Lonza, Basel, Switzerland) were cultured in KBM-Gold keratinocyte cell basal medium (Lonza) supplemented with 2 mM L-glutamine and 10% fetal bovine serum (Lonza). In brief, 1.3 x 105 cells were seeded in the wells of 12-well multiwall plates. After 24 h, the medium was changed to fresh serum-free medium, and GW1100 was added to the cells. After 30 min in GW1100, DGLA was added. After 24 h, the medium was saved for use in a β-endorphin ELISA.

Docking of DGLA on GPR40

Acute EF exposure is known to induce a notable increase in plasma DGLA levels in healthy subjects [10]. DGLA is known to activate GPR40 in HEK293 cells stably expressing GPR40 [16]. Therefore, we hypothesized that the increased plasma DGLA levels following EF exposure might be linked to changes in β-endorphin levels. Thus, we carried out a binding study using Sybyl-X2.0 software to explore the interactions of DGLA with the active site of GPR40. As shown in Figure 1, DGLA formed hydrogen bonds with Tyr91, Arg183, and Arg258, indicating that DGLA can bind to GPR40.

Effect of DGLA on β-endorphin secretion in human epidermal keratinocytes

In order to determine whether the docking of DGLA on GPR40 can induce a change in cellular function, we investigated the effect of DGLA on β-endorphin secretion using human epidermal keratinocytes. Human keratinocytes were treated with DGLA, and the secretion of β-endorphin was measured using ELISA 24 h later. As shown in Figure 2a, DGLA increased β-endorphin secretion into the culture media in a dose-dependent manner. Under these conditions, exposure of the cells to 30 μM of cis-4,7,10,13,16,19-docosahexaenoic acid (DHA) did not affect the secretion of β-endorphin (1.12-fold, p=0.252); DHA (100 μM) also examined, but it was itself cytotoxic (data not shown).

To determine the specificity of DGLA, we next examined the effect of DGLA on the secretion of α-MSH. DGLA had no effect on α-MSH secretion at any concentration tested (Figure 2b). Under these condition, exposure of the cells to 30 αM of DHA did not affect the secretion of μ-MSH (0.99-fold, p=0.154).

We then evaluated whether the GPR40 antagonist GW1100 could attenuate the effect of DGLA-stimulated β-endorphin secretion. The stimulating effect by DGLA (30 μM) was almost completely abolished by 10 μM GW1100 (Figure 2c).

The present results indicate clearly that acute EF exposure affects plasma β-endorphin levels in healthy human subjects. β-Endorphin, α-MSH, and ACTH are reported to be the cleavage products of a precursor peptide proopiomelanocortin (POMC) in the hypothalamus-pituitary gland system [17]. However, our findings show that EF exposure did not change ACTH or CRH, which is an endogenous stimulator of ACTH secretion at the paraventricular hypothalamic nucleus. Interestingly, POMC in epidermal keratinocytes have also been suggested play a key role in the blood levels of β-endorphins [18-19]. Indeed, a recent study has shown that plasma β-endorphin levels can be elevated by low-dose UV exposure [19]. Moreover, Khodorova et al. have reported that there is a new peripheral endogenous analgesic circuit that can induce the release of β-endorphins from keratinocytes [20]. Thus, keratinocyte-derived β-endorphins may affect, at least in part, on up-regulation of plasma β-endorphin levels induced by EF exposure.

In humans, four free fatty acid (FFA) receptors have been identified: GPR40 (FFA1 receptor), GPR43 (FFA2 receptor), GPR41 (FFA3 receptor), and GPR120 (FFA4 receptor) [21]. An omega-6 fatty acid, cis-8,11,14-eiocosatrienoic acid (DGLA), is reported to be an endogenous ligand of GPR40 [16]. We have previously shown that acute EF exposure induces an increase in plasma DGLA levels of approximately 1.4-fold [10]. When considering the role of DGLA in changes in the plasma levels of β-endorphin, Nakamoto recently reported that intracerebroventricular injection of the GPR40 agonist GW9508 induces β-endorphin release in the arcuate nucleus of mice [22]. GPR40 is expressed by human epidermal keratinocyte cell lines [23], and in the present study, DGLA induced β-endorphin secretion by human epidermal keratinocytes in vitro, while DHA had no effect. This response was inhibited by the GPR40 antagonist GW1100. Briscoe et al. observed that treatment with either DGLA or DHA results in an increase in [Ca2+]i in HEK293 cells stably expressing GPR40 [16], with pEC50 values of 5.14 and 5.37 for DGLA and DHA, respectively. This apparent discrepancy may result from either of the following; (i) differences in the detection system used for the functional assay: e.g., the ability to increase intracellular calcium versus the ability to increase β-endorphin secretion; or (ii) differences in the cell culture systems: e.g., human embryonic kidney 293 cells versus human epidermal keratinocytes.

Molecular computational modeling analysis showed that DGLA can bind to GPR40 in its active site, in a manner similar to TAK-875 [24]. DGLA binding to GPR40 was found to be stabilized through the formation of hydrogen bonds with Tyr91, Arg183, and Arg258, whereas a previous study of GPR40 with the agonist GW9508 reported hydrogen bonding to Asn244 and Ser247 [25]. This discrepancy may result from differences in the model systems; e.g., 4PHU (the crystal structure of human GPR40 bound to the allosteric agonist TAK-875) versus 1GZM (the structure of bovine rhodopsin in a trigonal crystal form).

Dietary fat is reported to be responsible for the release of Β-endorphins in the serum and cerebrospinal fluid of rats [26]. We have recently found using non-targeted metabolome analysis that an increase in plasma DGLA levels elicited by EF exposure [10]. Thus, up-regulation of plasma DGLA levels by EF exposure might involve, at least in part, the GPR40 signaling cascade. It is reasonable to speculate that EF exposure might alleviate pain through the up-regulation of β-endorphins. Shinba et al. reported that EF treatment for 3-4 weeks reduced the visual analog scale value for pain in chronic pain with no obvious underlying disease [9]. Although repetitive EF treatment was not performed in the present study, EF therapy may induce analgesia, at least in part, through the activation of opioid receptors by β-endorphins. Further studies to elucidate the effect of EF on endogenous DGLA/ β-endorphin-dependent signaling pathways and how this affects therapeutic interventions are therefore necessary.

Our findings show that several cytokines, including IL-12 and IFN-γ, are up-regulated by acute EF exposure. To date, research regarding the effect of EF exposure on cytokines is scarce. Most of the published studies were carried out using exposure to electromagnetic fields (EMF). Salehi et al. reported a decrease of IL-12 levels in the serum of rats after exposure to extremely low-frequency EMF (2 h/day for 3 months) [27], while Selmaoui et al. reported that acute EMF exposure increased IL-6 levels in the serum of healthy young humans [28]. In contrast, we found that EF exposure led to up-regulation of the Th1 cytokines IL-12 and IFN-γ, but not the Th17 cytokine IL-6, suggesting that EF exposure might involve, at least in part, cell-mediated immunity. Baldridge et al. have recently reported that hematopoietic stem cells are activated by IFN-β in response to chronic infection [29]. There is also evidence that β-endorphins at concentrations between 10-10 and 10-13 M have a stimulating effect on human natural killer (NK) cell activity [30]. Thus, it is conceivable that the increase in plasma IL-12 and IFN-γ levels is, at least in part, responsible for the improvement seen in patients with tuberculosis who undergo EF treatment [31]. However, it is unclear at present whether the changes in cytokine levels can be attributed to macrophages, lymphocytes, or NK cells. Further studies are needed to clarify the cytokine signaling pathways induced by EF exposure, and how this might affect the prevention of infection.

In conclusion, acute EF exposure induced notable effects on plasma β-endorphin levels in healthy subjects. In human epidermal keratinocytes, β-endorphin secretion induced by DGLA was sensitive to the GPR40 antagonist GW1100. Our findings not only help elucidate the molecular mechanisms of pain alleviation induced by EF therapy, but may also be important to the development of alternative medicine strategies.

©2015 Nakagawa-Yagi Y. This is an open-access article distributed under the terms of the Creative Commons Attribution License, which permits unrestricted use, distribution, and reproduction in any medium, provided the original author and source are credited. 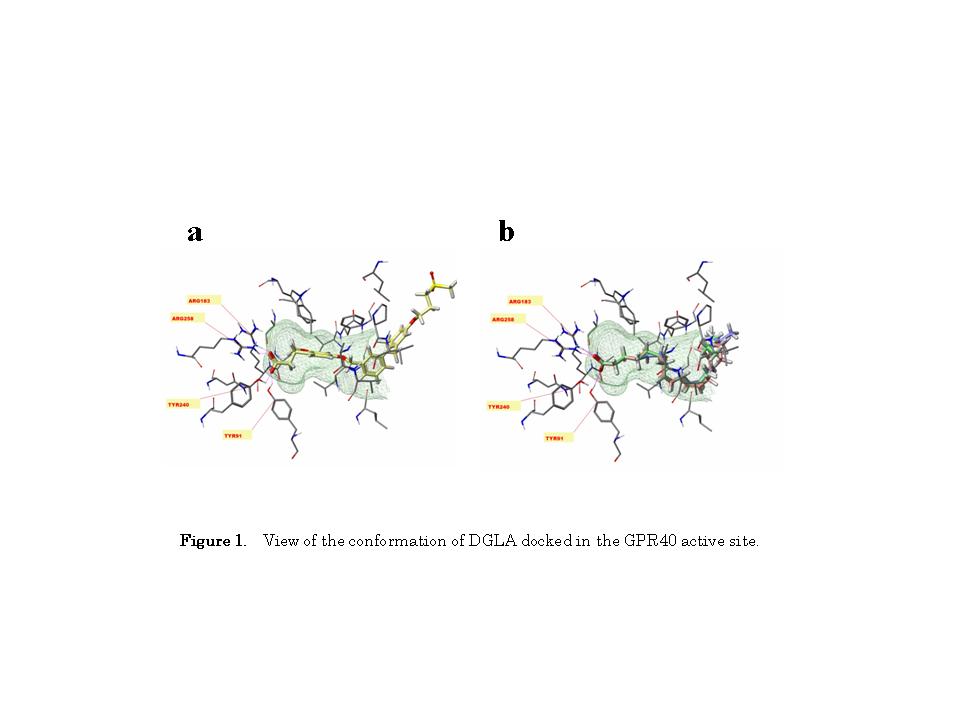 Figure 1. View of the conformation of DGLA docked in the GPR40 active site 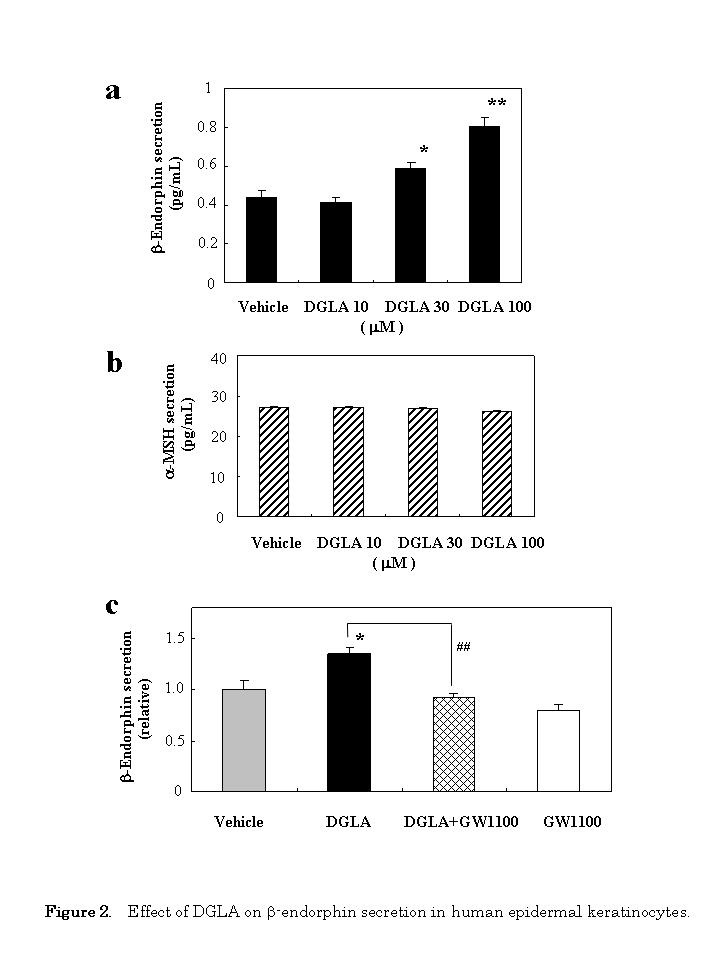