Gestational trophoblastic neoplasia comprises a unique group of human neoplastic diseases that derive from fetal trophoblastic tissues. They are proliferative as well as degenerative disorders of placental elements and include complete or partial hydatiform mole (90%), invasive mole (5-8%) which could also be metastatic, villous or a villous choriocarcinoma (1-2%), and placental site tumor (1-2%).

During the study period of 5 years, from January 2009 to December 2013, there were 17 cases analyzed retrospectively.

Invasive  mole  and  choriocarcinoma,  which  make  up  the  vast  majority  of  these  tumors,  always  produce  substantial  amounts  of  human  chorionic  gonadotropin  (hCG)  and  are highly responsive to chemotherapy with an overall cure rate exceeding 90%, making it usually possible  to  achieve  cure  while  preserving  fertility [5].This  success  is  due  to  the  unique  sensitivity of these two trophoblastic neoplasms to chemotherapy and the use of hCG as a tumor  marker for diagnosis, monitoring treatment and follow-up. In contrast, the rarer PSTT and ETT have low hCG levels [6] and are relatively resistant to ChT. Therefore, the first-line treatment in these cases is surgery, particularly in no metastatic cases [3].

Seventeen cases  of  GTN  managed  over  a  period  of  5 years from 2009 to 2013 were analyzed retrospectively to find out the incidence of GTN in relation  with  variables like age, gravidity,  presentation,  and the outcome .

For 11 women (64.7%), which were asymptomatic, the diagnosis was carried out the disrupted biological evolution (β-hCG stagnation on 4 weekly dosages or increase of β-hCG levels for over 10% on 3 weekly dosages).

All patients with a GTN in this study were examined through the staging using ultrasonography (Figure 1) with transvaginal Doppler, lung X-ray, CT thoracic abdomino- Pelvic . Brain CT was done in 2 patients due to headache (access to brain MRI was limited) and pelvic MRI was done in 3 patients. 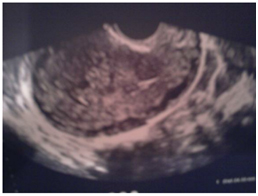 The diagnostic criteria used in all the patients are the FIGO criteria proposed in 2002.

In our series there were 5 cases of lung metastasis on the lung X-ray that were confirmed by the TAP CT (Figure 2). But no hepatic, brain, or vaginal metastasis was found. 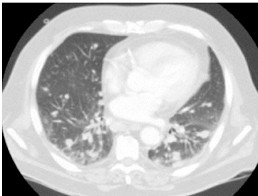 The risk scores range between 3 and 10. A majority of our patients (59%) were low risk (score <6). 35% of patients were in high risk (score >6) and a women left out against medical advice before completing the radiological assessment for the scoring.

Before starting any chemotherapy regimen and before each cycle, the patients were routinely asked for a full pre-chemotherapeutical balance sheet after an extensive clinical examination:

All the 10 patients with low risk underwent the same protocol based on a mono chemotherapy methotrexate 1mg / kg AJ1, J3, J5, J7. The protocol was repeated every 14 days.

For 6 patients with high risk scores, the protocol adapted was BEP: bleomycin, etoposide, and cyclophosphamide. The protocol was repeated every three weeks. The follow up of these patients was done in parallel at our department and at the Oncology department where they received the treatment.

We advocate further three courses of chemotherapy after negative tests, and we consider the rate of β-hCG as negative from 25 mui/ml.

For the majority of our patients this rate was observed.

For patients classified as low risk, the outcome was generally favorable:

For the 6 patients with high risk: They received BEP protocol:

Gestational  trophoblastic  neoplasia  (GTN)  are  malignant  lesions  that  arise  from  placental villous  and  extra-villous  trophoblast [5,7]. GTN occurs in 1:40,000 pregnancies and is more common in Asia than in Europe or North America [4]. Four clinicopathologic conditions make up this entity: 1) Invasive Mole (IM) that follows either a complete (CHM) or partial hydatidiform mole (PHM), 2) choriocarcinoma (CCA), 3) placental site trophoblastic tumor (PSTT) and 4) epithelioid trophoblastic tumor (ETT).  Each of these conditions can perforate the uterine wall, metastasize and lead to death if left untreated.

About 15% of all molar pregnancies will develop into gestational trophoblastic neoplasia (GTN) [5,8].

GTN arises when the normal regulatory mechanisms controlling the proliferation and invasiveness of trophoblastic tissue are lost. Originating in placental tissue, they are characterized by a distinct tumour marker (β-hCG) and have varying tendencies towards local invasion and distant metastasis [9].

Referral to a gynecologic oncologist should be initiated when, following evacuation of a hydatidiform mole, β-hCG levels show an abnormal regression pattern (i.e., a 10% or greater rise or a plateauing for three stable values over two weeks), rebound, are high (>20,000 mIU/mL) more than four weeks post- evacuation, or are persistently elevated six months post-evacuation [10,11], or histologic diagnosis of choriocarcinoma or placental site trophoblastic tumour

Ultrasound can be used to help find out if a mole is invading local tissues. Transvaginal ultrasound (TVUS) imaging is a, fundamental tool for the diagnosis of GTN, but different diseases may have similar appearances on imaging studies [12]. The most common finding is a focal myome trial mass. The image may be hypo- or hyperechoic, or complex and even multicystic. Intramyometrial anechoic spaces result from hemorrhage and tissue necrosis or vascular spaces [12,13].

Color Doppler ultrasound may demonstrate intense chaotic vascularity and loss of vessel discreteness. It demonstrates high-velocity, low-resistance flow in contrast with the flow usually detected in normal myometrial arteries. However, PSTT may be hypo- or hypervascular [12].

Other imaging studies, such as magnetic resonance imaging (MRI) and CT, are not part of the routine assessment of GTN and are used only in equivocal cases or when metastatic disease is suspected [12,15] .

In 2002, FIGO (Table1) [16] adopted a combined anatomic staging and modified WHO risk-factor scoring system for GTN.  Treatment is based on the total score which signifies the risk of the patient developing single-agent drug resistance.  Patients with non-metastatic disease (Stage I) and low-risk metastatic GTN (Stages II and III, score <7) can be treated initially with single-agent chemotherapy with either methotrexate or actinomycin D with cure rates approaching 80-90%. Low risk patients are usually treated with single agent chemotherapy.  Single agent actinomycin-D or methotrexate with or without folinic acid is the primary therapy [17,18].  With appropriate initial classification and proper treatment, cure rate approaches 100%. Careful monitoring for evidence of drug resistance (plateau or ↑ β-hCG and/or devolvement of new metastasis) as 30-50% develop resistance to the first line chemotherapy agent and 5-15% may require multi-agent chemotherapy and/or other modalities. DuBeshter et al. treated 48 patient between 1965 -1990 with low risk metastatic GTN with single agent MTX or actinomycin D and noted all patients achieved sustained remission, although 51% required 2nd  single-agent regimen and 14% need multi-agent chemotherapy, and 12% underwent resection of resistant tumor foci.

1 to 2 cycles of maintenance chemotherapy should be given after the first normal β-hCG. Single agent methotrexate typically achieves complete response rates ranging from 48 to 74% after four to five cycles and single agent actinomycin-D has better complete response rates (70 to 100%) [19,20].   Actinomycin D in methotrexate resistant patient could increase the cure rate > 95%. Despite resistance to first –line chemotherapy, cure rate of almost 100% is achieved with combination chemotherapy. In Gynecologic Oncology Group (GOG) 174, Patients with GTN and a WHO score of 6 or less are randomized to 30 mg/M sq methotrexate IM q week vs. 1.25 mg/M sq Actinomycin D IV push every 2 weeks. The biweekly actinomycin D had higher CR rate by 17% (p=.01), than the weekly IM methotrexate regimen, while both regimens were well tolerated [21,23].   In another retrospective study combination chemotherapy with actinomycin-D and methotrexate for a median three cycles achieved 98% response rate, with limited grade 3 and 4 hematologic toxicities (12% & 8%, respectively) [21,24].

High risk metastatic GTN is treated with multi agent chemotherapy (Table 2) [3]. Etoposide, actinomycin-D, methotrexate, vincristine, and cyclophosphamide (EMA/CO) or with cisplatin (EMA/CE) is usually first line therapy. With EMA/CO the complete response rate is up to 71%, and overall survival can be as high as 91% in women with poor prognosis metastatic disease [25]. EMA/CE is associated with greater hematologic and ototoxicity and peripheral neuropathy [26,27].  The complete response rate varies between 67 to 73% when it is used as second line therapy [27,28]  Another regimen that has been used as salvage therapy following resistance to primary therapy with etoposide, methotrexate, and actinomycin-D (MEA) is 5-FU with actinomycin-D (FA).

All patients must be encouraged to use effective contraception during the entire interval of monitoring, oral contraceptives are safe [17,21] importantly, and the frequency of later major and minor congenital malformations is not increased.

First trimester ultrasound and serum β-hCG testing is indicated for women who become pregnant for the first time after treatment for GTN. β-hCG testing at 6-8 weeks after delivery to assure it has normalized and placenta should be sent for histopathology.

Authors have declared that no competing interests exist

©2016Slimani O. This is an open-access article distributed under the terms of the Creative Commons Attribution License, which permits unrestricted use, distribution, and reproduction in any medium, provided the original author and source are credited.