Glycogen persistence in ultramarathon athletes after six hours of exercise

Glycogen, a branched glucose polymer, is the main store of readily available energy in mammalian skeletal muscle and plays a key role in muscle function as demonstrated by the inability to sustain prolonged high-intensity exercise when glycogen stores are depleted.

Context: To determine the effect of ultra-endurance exercise on the intramuscular glycogen reserves of an ultra-marathon runner.

Case report: An athlete ran for six consecutive hours with no caloric replacement. Biopsies of the Vastus lateralis were taken pre and post exercise. The fragments were frozen and later histochemically prepared using the PAS technique. Significant amounts of glycogen were found in the post-exercise sample. Conclusion: Ultra endurance exercise cannot fully deplete glycogen in muscle of trained individuals.

Glycogen, a branched glucose polymer, is the main store of readily available energy in mammalian skeletal muscle and plays a key role in muscle function as demonstrated by the inability to sustain prolonged high-intensity exercise when glycogen stores are depleted.

The athlete was submitted to a muscular biopsy taken from the distal vastus lateralis muscle region. The methodology employed was that proposed by Dubowitz [1,2]. A small fragment was taken after a 48 hr of rest period and the PAS muscular glycogen identification histochemical technique applied. The muscle fragment extracted was immediately fixed and frozen in isopentane, refrigerated in liquid nitrogen and properly stored at -80ºC for future analysis (Figure 1a). 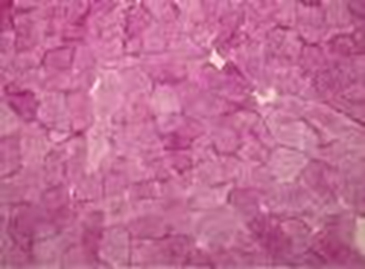 A thirty-day recovery period was proposed, after which time the athlete could perform the six-hour running session. The running procedure was performed on a RT 250 pro São Paulo Brazil Movement® treadmill at a 1% gradient. The suggested running speed was ten kilometers per hour (10 km/h), the same speed comfortably maintained by the athlete in competitions. An S120 Polar Finland heart rate monitor was used to monitor effort intensity. The athlete was advised to eat properly as well as to be adequately hydrated during the days leading up to the exercise session.

On the test day the athlete attended the exercise session venue 3 hours after a standard breakfast, which was composed by 100 gr of bread with 20 gr of butter, a cup containing 250 ml of milk with coffee, which was similar in content and composition to that which he would normally ingest before competition. Our athlete’s heart rate at rest was recorded along with weight on 2096 PP Toledo® São Paulo-Brazil scales which weighed up to 200 kg in 50 gram graduations (Table 1). The athlete was wearing only running clothes, which included a pair of running shoes.

Following a proper warm up the running session was begun. Throughout the exercise period only water was offered to the athlete, such that no energetic supplement was used. Every full hour the runner came down from the treadmill to urinate. Subsequently body mass and heart rate were recorded to monitor for dehydration. This protocol was used because it mimics our athlete race, and the purpose of the study was to determine if a typical race could completely deplete glycogen stores.

After six hours the athlete was immediately submitted to a vastus lateralis muscle biopsy on the opposite limb had been used in the first biopsy. The fragment was immediately frozen and later prepared and histochemically stained to detect the presence of glycogen (Figure 1b). 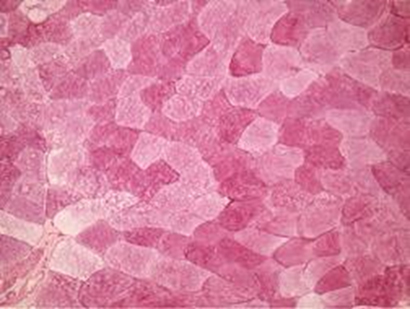 Figure 1b. Post exercise biopsy of vastus lateralis colored histochemically with PAS. There was a difference of color intensity in post exercise. However, large amounts of glycogen still remain in depleted cels at the present slice. x 125.

The analysis of the biopsies pre and post ultra-endurance exercise, shown in Figure 1a and 1b respectively, reveal a discreet reduction of intramuscular glycogen in Figure 1b, evidenced by slight color reduction in some muscle cells.

The present study investigated the effect of ultra-endurance exercise on intramuscular glycogen reserves. Our results show that ultra-endurance exercise to exhaustion promoted muscle glycogen depletion predominantly in a specific type of muscle fibres. Although there are studies in the scientific literature that have observed muscle metabolism behaviour in ultra-prolonged exercise [3-5], ultra exercise effects with no caloric supplementation to intramuscular glycogen reserves have not yet been reported. In our research we decided to evaluate muscular metabolism performance under conditions never previously investigated. The athlete underwent a six-hour running session on a treadmill in a post absorptive state while receiving no caloric supplementation. Despite these conditions large amounts of muscular glycogen were observed in depleted muscle cells Figure 1b. The assumptions that may explain this intramuscular glycogen presence are as follows:

Firstly, after the beginning of the exercise and upon gradual decrease in intramuscular glycogen, a heterotrimeric serine/treonine protein kinase, recently described as 5’AMP- activated protein kinase (AMPK), acts as an important intracellular AMP/ATP and creatine/phosphocreatine rate sensor [6]. There is evidence that it is regulates according to the variation in muscular glycogen reserves. AMPK is found in its active form during exercise and increases with effort intensity [7-11,12]. Its function is probably to translocate the GLUT4 carrier protein to the cell membrane, where GLUT4 is the most important glucose carrier isoform during exercise. This capture is particularly important since blood flow to active muscles can increase up to twenty fold during intense exercise. Initially, this process probably prevents a critical reduction of intramuscular glycogen reserves, since it increases in the same way as glyconeogenic activity in the liver [4,13]. However, during ultra-prolonged exercise glycemic levels would be significantly reduced if it were not for the glucose/fatty-acids cycle modulation known as the “Randle Cycle”, which increases fatty-acid oxidation due to AMPK interaction with the Acetil CoA Carboxilase beta (ACCβ), which increases the fatty-acids supply at the cellular level [7]. The blood glucose supply constitutes a 2nd hypothesis. Defined as blood flow product divided by glycemic concentration, this is related to the amount of glucose carried by the blood which can reach the muscle arteries in the active muscles while facilitating its capture [14].

The 3rd assumption is that some intramuscular glycogen “granules”, also called glycosomes, perform a different role. These granules play a structural protein role participating in myofilament sliding and persist even after their death [15]. This fact alone would prevent PAS from showing a negative result for the intramuscular glycogen presence.

We conclude that six-hour ultra-prolonged exercise does not exhaust intramuscular glycogen on PAS even in the absence of caloric replacement during exercise. The most likely reasons for this persistence are: AMPK influence on GLUT4; initial plasmatic glucose levels; modulation of acetyl-CoA Randle Cycle entry and glycosomes presence which plays a structural role in myofilament adherence.

©2016 Tarini VAF. This is an open-access article distributed under the terms of the Creative Commons Attribution License, which permits unrestricted use, distribution, and reproduction in any medium, provided the original author and source are credited.

Figure 1b. Post exercise biopsy of vastus lateralis colored histochemically with PAS. There was a difference of color intensity in post exercise. However, large amounts of glycogen still remain in depleted cels at the present slice. x 125.