Conclusions: patients with HCC had a worse evolution and pooroutcomesignificantly greater than in patients with EEC. The use of virological tests in the screening would allowto detect HCC in early stages

Hidden cancer of uterine cervix is an endocervical and /or endoglandular carcinoma located deep or higher up in the miocervix, reason by which it constitutes a big diagnosis problem and a challenge for colposcopist and cytopathologist experts.

The revision of smears in patients with cervical carcinoma, demonstrated 4% of diagnostic doubts originated in reactive and inflammatory changes, and the presence of immature squamous metaplastic type cells (ISM) in 68,75%[1,2].

The squamous carcinomas originated in ISM that evolve deep in the endocervical canal and into de glandular crypt are very frequently, inaccessible to colposcopic and cito-histophatologic diagnosis, with delayed expression in advanced stages[3]. In 60% of ISM, HPVtypes 16 and 18 have been detected[4]. In the same way, the adenocarcinomas, specially the ‘endometroide’ variant, originated high up in the cervical canal evolves hidden or inaccessible to diagnostic methods. The latter is the most frequent type in the cervix[5].

Glandular or squamous lesions originated in glandular epithelium or ISM, into the cervical canal, 3 to 4 cm long, with cripts that reach up to 8-10 mm deep in the miocervix according to the authors, cause difficulties and delays in the diagnosis, since their evolution is hidden and thus are detected in more advanced stages. The chances of missing out the lesion are considerable[6,7]. Frequently, these are patients with negative smears and normal or low suspicion colposcopies, even in the last six to twelve months preceding a diagnosis of carcinoma [8,9].

The objectives were to evaluate the incidence of hidden cervical cancer (HCC), to analyze the diagnostic, histopathological aspects and clinical evolution.

In Gynecological Services of the National Hospital Prof. Dr. A. Posadas, between January 1995 and December 2013, 677 patients were diagnosed with cervical cancer.

Unit of study: all women with cervical cancer who were attended during this period. A revision of their clinical cards and histories was made.

Selection criteria: patients with cervical cancer and a follow-up of more than twelve months. The tumor diagnosis and stage was assessed according to criteria of the Argentine Association of Gynecology & Oncology (AAGO), FIGO 2009 norms and staging and the histopathological criteria of the World Health Organization (WHO). Ectocervical and endocervical cytology with brush (brushing), and colposcopy of lower genital tract were performed. Histopathological study of all biopsies and surgical specimens was performed.

Patients received treatments according to the clinical staging of disease: total hysterectomy, radical hysterectomy with lymph node dissection, with removal of the fallopian tubes and ovaries (Wertheim-Meigs), or without removal fallopian tubes and ovaries, neoadyuvant chemotherapy, concurrent chemotherapy and radiotherapy, braquitherapy and telecobaltotherapy. A follow-up was held for more than twelve months.

Definition: hidden cancer of the uterine cervix (HCC) refers to the cancer located deep or up in the endocervical canal and miocervix, whose detection is delayed, with negative cytology, colposcopy and biopsies 6 to 12 months before its clinical and / or cyto-colposcopical expression; distinguishing it from the cancer located in the exocervix or exo-endocervix (EEC). 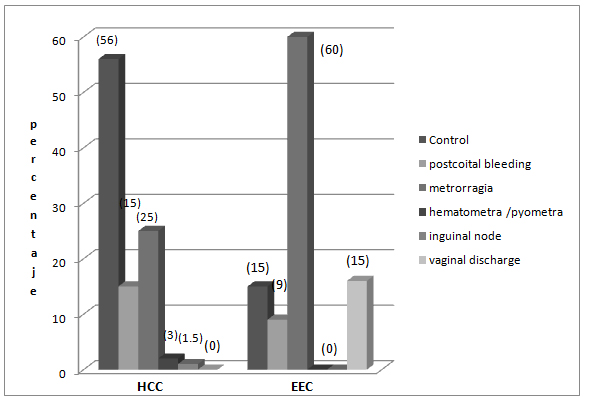 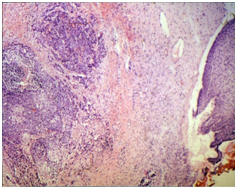 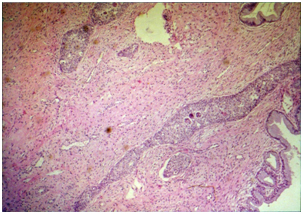 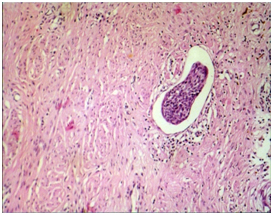 Figure 4. Microphotograph 400 X- H&E. Same patient as in figure 5, lymph embolism of squamous carcinoma in the piece of hysterectomy (WertheinMeigs). 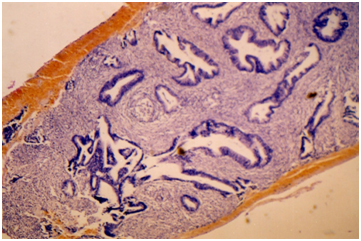 Figure 5. Microphotograph 40 X- H&E. Higher up in the endocervical canal asymptomatic adenocarcinoma was detected by curettage. 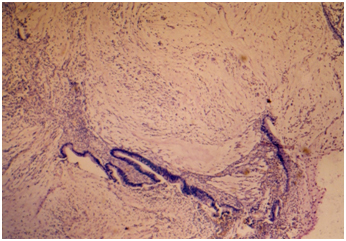 Figure 6.  Microphotograph 40 X- H&E. Same patient as in figure 5, adenocarcinoma invading the isthmus was observed in the piece of subtotal hysterectomy for pyometra and hematometra  (stage IV).

Among patients with HCC, 32 (47,06%) were treated surgically: a total of 3 hysterectomies with vaginal sleeve and 29 (42,65%) had radical hysterectomies with lymph node dissection performed, with or without removal of fallopian tubes and ovaries (Wertheim-Meigs). 12 (17,65%) of them had adjuvant radiation therapy and / or neoadyuvant chemotherapy for a more advanced surgical stage. Chemotherapy, concurrent chemotherapy and radiotherapy, braquitherapy and telecobaltotherapy were performed in 35 (51,47%) patients with non surgical stages (IIab, III y IV).

The HCC is originated deep in the endocervical canal, or into glandular crypts in the upper part of the canal, or in focal Immature Squamous Metaplasia (ISM). Its detection in advanced stages was most frequently observed by delays in the clinical expression [3,5].

The presence of small adenocarcinomas in absence of prior adenocarcinomas in situ, suggests the possibility of rapid progression[5]. Symonds P. et al.suggest that diagnosis in advanced stages is more dependent on the biological behavior of the tumor than on the delay in its clinical expression. However they observed, and it is noteworthy, that the diagnosis of asymptomatic invasive cervical cancer was made following a routine smears only in 5,7%10.

The sensitivity of cytology for HCC was less than for EEC, and the number of false negatives and subdiagnosis was greater in the HCC patients; the differences were significant and match findings in previous studies[11,12].

In this study we found ISM cells without atypia in patients with HCC (41,2%). The finding of these ISM cells raises frequent doubts and errors in its interpretation[2,13]. Santos et al., found high-risk HPV types in 16% of women with ISM atypical cells[14].

In previous studies, we have observed by hibridation in situ, HPV types 16 and 18 in areas of mature and immature squamous metaplasia, near condilomas and Cervical Intraepithelial Neoplasia (CIN), associated with CIN II- III more frequently in the immature metaplasia than in mature metaplasia, where HPV types 6 and 11 predominated. Similar findings were observed by others autors[4,13,15].

The false-negatives cytologic smears, either because of inadequate sampling or because of diagnostic errors, are recognized causes of the delayed detection of the disease[16-19].

Therefore, it is necessary to consider the possible existence of a hidden carcinoma deep in the cervix and to optimize the diagnostic methodology, adding, as well, some of the virological tests that are already successfully being used in some developed countries[20-24]. Using exocervical cytology and endocervical brushing, the false-negatives decrease only 3% [25,26].

Hatem and Wilbur in the Rochester University Medical Center, related false-negative smears with rapid progression and they published the presence of atypical immature squamous metaplasia cells in 68%[3].

Most of the patients with HCC displayed negative colposcopy or low suspicion, with delayed clinical expression. The HCC was missed on cytology smears as well as on colposcopically directed biopsies and was detected only on abrasive brushing and/ or endocervical curettage, LLETZ, conisation and hysterectomy. The difference with EEC was significant. Similar data was observed by others authors[28-30].

Kodiathodiet al., found a significant proportion of women with negative colposcopy and nuclear borderline changes in endocervical cells, and the presence of H-SIL and carcinomas during the first year of follow-up. They propose to optimize the algorithm diagnosis to detect high grade histology and cancer in earlier stages [31].

Although the squamous type in both HCC and EEC was most frequent in the cervix (80,88% y 91,63% respectively), adenocarcinomas and adenosquamous had a significantly greater incidence in HCC (19,12%) than in the EEC (8,37%). Similar issues match previous studies[32].

As regards the evolution of the disease, its rapid progression and death was significantly greater in patients with HCC than in patients with EEC (34,43% vs.17,1%; P<0.002), due to its presentation in advanced stages and its histologic type.These differences were related, not only to the stage of the tumor, advanced in most cases, but also to the histologic type (adenocarcinoma and adenosquamous: 19,12% in HCC and 8,37% in EEC) and its differentiation, since its biological behavior is more aggressive and with worse prognosis[10,33,34].

It is important to focus in early diagnosis of cervical cancer. Therefore, it is necessary to optimize the diagnostic methodology available, investigating risk factors for cervical cancer development and including virological tests that wouldallow to detect hidden endocervical lesions[20-24,35-37].

We consider of great importance to implement health policies that aim to prevention and early detection of cervical cancer. This will lead to improve prognosis of the disease, survival, quality of life and to significantly reduce therapeutic costs.

©2016 Dalbert DB. This is an open-access article distributed under the terms of the Creative Commons Attribution License, which permits unrestricted use, distribution, and reproduction in any medium, provided the original author and source are credited.

Figure 4. Microphotograph 400 X- H&E. Same patient as in figure 5, lymph embolism of squamous carcinoma in the piece of hysterectomy (WertheinMeigs).

Figure 5. Microphotograph 40 X- H&E. Higher up in the endocervical canal asymptomatic adenocarcinoma was detected by curettage.

Figure 6.  Microphotograph 40 X- H&E. Same patient as in figure 5, adenocarcinoma invading the isthmus was observed in the piece of subtotal hysterectomy for pyometra and hematometra  (stage IV).