Neuronal voltage-gated calcium (Ca2+) channels (VGCCs) are well known for their important role in the activities of neurotransmitter systems and signaling pathways in specific circuits. Disturbances in the neuronal circuits can contribute to the manifestation of neuropsychiatric disorders. For example, sensorimotor gating deficits are observed in a majority of patients with schizophrenia. The integrity of sensorimotor gating mechanisms is often assessed with the prepulse inhibition (PPI) test but the various roles of different VGCCs during PPI remain unclear. Thus, the present study aimed to examine whether Cav2.2-mediated signaling is associated with the symptoms of schizophrenia using behavioral and biochemical tests. Mice that received intracerebroventricular (i.c.v.) injections of ω-Conotoxin GVIA (5 pg/side), a Cav2.2 blocker, exhibited deficits in PPI and decreased baseline levels of dopamine and serotonin within the striatum and frontal cortex. These findings indicate that abnormalities in Cav2.2-mediated neuronal circuits might contribute to the basic pathophysiological mechanisms underlying schizophrenia.

Calcium (Ca2+) signaling via voltage-gated Ca2+ channels (VGCCs) mediates the entry of Ca2+ into cells following membrane depolarization and initiates the transduction of electrical signals into chemical signals [1]. Neuronal VGCCs such as the Cav2.1 (P/Q-type), Cav2.2 (N-type), and Cav2.3 (R-type) channels mediate a number of neuronal functions, including neuronal excitation, neurite outgrowth, synaptogenesis, neurotransmitter release, neuronal survival, differentiation, plasticity, and the regulation of gene expression [1-3]. However, the various roles of different VGCCs in the expression of neuropsychiatric disorders have yet to be fully characterized.

Neuropsychiatric disorders such as schizophrenia, Huntington's disease, obsessive-compulsive disorder, attention-deficit disorder, and Tourette's syndrome are associated with deficiencies in sensorimotor gating mechanisms [4]. In humans and animals, the integrity of sensorimotor gating mechanisms is often assessed using prepulse inhibition (PPI), which is the suppression of the startle reflex when a startling stimulus is preceded by a weak stimulus at lead times of 20-500 ms [4]. A multitude of evidence suggests that the pathophysiology of schizophrenia involves dysfunction in the dopaminergic, serotonergic, glutamatergic, and g-aminobutyric acid (GABA)-ergic neurotransmitter systems [5] and it has been reported that Cav2.2 channels influence the presynaptic machinery involved in the release of several neurotransmitters, including dopamine [DA; 6-8], serotonin [5-HT; 9], glutamate [10], GABA [11], acetylcholine [12], and norepinephrine [NE; 13], from central neurons. Of clinical relevance, schizophrenia is strongly associated with genes important for presynaptic signaling [14-17]. Thus, the administration of a Cav2.2 blocker should result in PPI deficits, because the precise regulation of neurotransmitter release via Cav2.2 channels plays an important role in the functioning of neuronal circuits.

Therefore, the present study aimed to investigate the relationship between Cav2.2-mediated signaling and sensorimotor gating as a first step towards understanding the mechanisms underlying the expression of schizophrenia. Wild-type mice received intracerebroventricular (i.c.v.) administrations of ω-Conotoxin GVIA, which is an antagonist of the Cav2.2 channel [1], and were then assessed in a PPI test. Additionally, the amounts of monoamines and their metabolites in the brains of the mice were measured to determine the relationship between alterations in monoamine metabolism and behavioral abnormalities.

All animal procedures were approved by the Animal Experiments Committee of Shanghai Jiao Tong University and RIKEN. The C57BL/6J mice were provided by Charles River Japan (Kanagawa, Japan). The mice were given free access to water and food pellets (CRF-1; Oriental Yeast Co. Ltd., Tokyo, Japan) and were housed under a 12/12-h light/dark cycle (lights on from 08:00 to 20:00) at 23 ± 1°C and 55 ± 5% humidity. Testing was performed during the light phase of the cycle.

For the infusion studies, Cav2.2 blocker, ω-conotoxin GVIA (10, 50, or 100 pg/μL, Peptide Institute, Osaka, Japan) were dissolved in saline (vehicle). Under anesthesia and using standard stereotaxic procedures, stainless-steel guide cannulae (22-gauge) were implanted into the lateral ventricle (posterior to bregma, -0.34 mm; lateral to midline, ±0.9 mm; ventral from the dura, −2.3 mm). Mice were allowed to recover for at least 1 week following surgery. The mice were briefly anesthetized with isoflurane to facilitate insertion of the injection cannula (26-gauge). Infusions into the lateral ventricle (0.1 μL/side) are accomplished at a rate of 0.05 μL/min 30 min before behavioral or biochemical tests. The injection cannula was left in place for 2 min following the infusion. The drug doses were determined according to previous report [18,19]. Mice that were not treated with drugs received an equivalent volume of vehicle.

Inhibition of the acoustic startle reflex

The PPI tests were conducted using an SR-LAB system (San Diego Instruments; San Diego CA, USA) constructed of four sound-attenuating chambers that were each equipped with a cylindrical Plexiglas animal enclosure (length: 6.5 cm; inner diameter: 3.8 cm). Ventilation was provided by a small electric fan that also generated a background noise of 70 dB. The tone pulses were presented by a speaker positioned 24 cm directly above the animal enclosure and any motion resulting from the animal’s response was detected by a piezoelectric accelerometer affixed to the animal enclosure frame. The tone pulse parameters were controlled by a microcomputer using a software package (SR-LAB) and interface assembly that also digitized, rectified, and recorded the stabilimeter readings. Measures for both the acoustic startle response (ASR) and PPI were obtained in a single session, as described by Brake et al. [20], with minor modifications.

The mice were placed in the Plexiglas enclosure and allowed to acclimatize to the environment for 5 min before being tested in 37 discrete trials. In the first two trials, the magnitudes of the ASR to a 120 dB tone that lasted 50 ms were measured; these first two startle tones were presented to habituate the animals to the testing procedure and were omitted from the statistical analysis of the mean ASR amplitude. In the subsequent 35 trials, the startle tone was either presented alone or 100 ms after the presentation of a prepulse that lasted 30 ms. The prepulse intensity ranged from 3-15 dB above the background noise and varied randomly between the trials in steps of 3 dB. Measurements of the magnitudes of the ASR were obtained at each of the five prepulse intensities over five trials and the mice were randomly presented with only the startle tone during the other 10 trials.

The same stimulus condition was never presented in more than two consecutive trials, and the intervals between the trials were programmed using a variable interval schedule with an average duration of 15 s (range: 5-30 s). A measure of the ASR amplitude was derived from the mean of 100 digitized data points collected from the stimulus onset at a rate of 1 kHz. The effectiveness of the prepulse to suppress the ASR was expressed as a percentage based on the mean amplitude of responses to the startle tone alone (n = 10) relative to those recorded under the five prepulse conditions (n = 5/condition) and was calculated as follows: % PPI = 100 − [(mean startle amplitude for prepulse + pulse trials/mean startle amplitude for pulse–alone trials) × 100]%.

The levels of monoamines and their metabolites in the brain were examined as previously described by Nakagawasai et al. [21] with minor modifications. The mice were sacrificed with focused microwave irradiation 30 min after the i.c.v. injection and the brains were rapidly removed. The striatum and frontal cortex were dissected out onto an ice-cold plate and each brain sample was quickly frozen and stored in a deep freezer at -80°C until assayed. The contents of DA, 3,4-dihydroxyphenylacetic acid (DOPAC), homovanillic acid (HVA), 5-HT, 5-hydroxyindoleacetic acid (5-HIAA), and NE were determined by high-performance liquid chromatography (HPLC) with electrochemical detection (Eicom Corp., Kyoto, Japan).

The present study examined the effects of i.c.v. injections of ω-Conotoxin GVIA on the ASR and PPI. Four groups of male mice (n = 10 each) were administered i.c.v. injections of either vehicle or ω-Conotoxin GVIA (1, 5, or 10 pg/side). There were no significant differences in the startle amplitude among the groups (Figure 1A). In the PPI paradigm, although there was no significant difference between vehicle-injected and 1 pg/side ω-Conotoxin GVIA-injected mice (Figure 1B), the mice that received either 5 (Figure 1C) or 10 pg/side (Figure 1D) of ω-Conotoxin GVIA showed greater deficits in sensorimotor gating than the mice that received vehicle. Both of these groups exhibited significant deficits at three prepulse intensities (79 dB, 82 dB, and 85dB), which indicates that the blockade of Cav2.2-mediated signaling impairs sensorimotor gating. The correct placements of the guide cannula were verified by ink injections after the experiments were completed (data not shown). 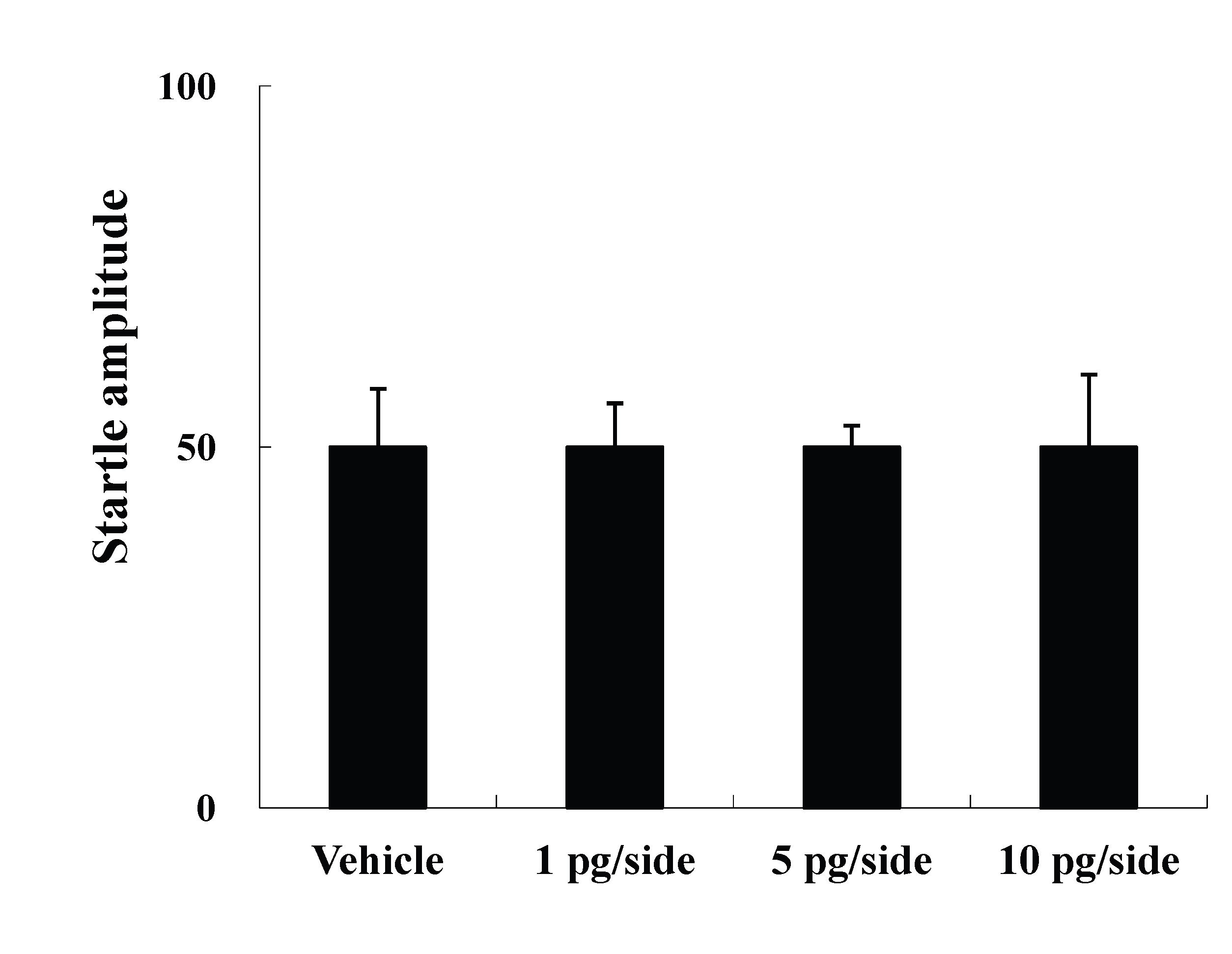 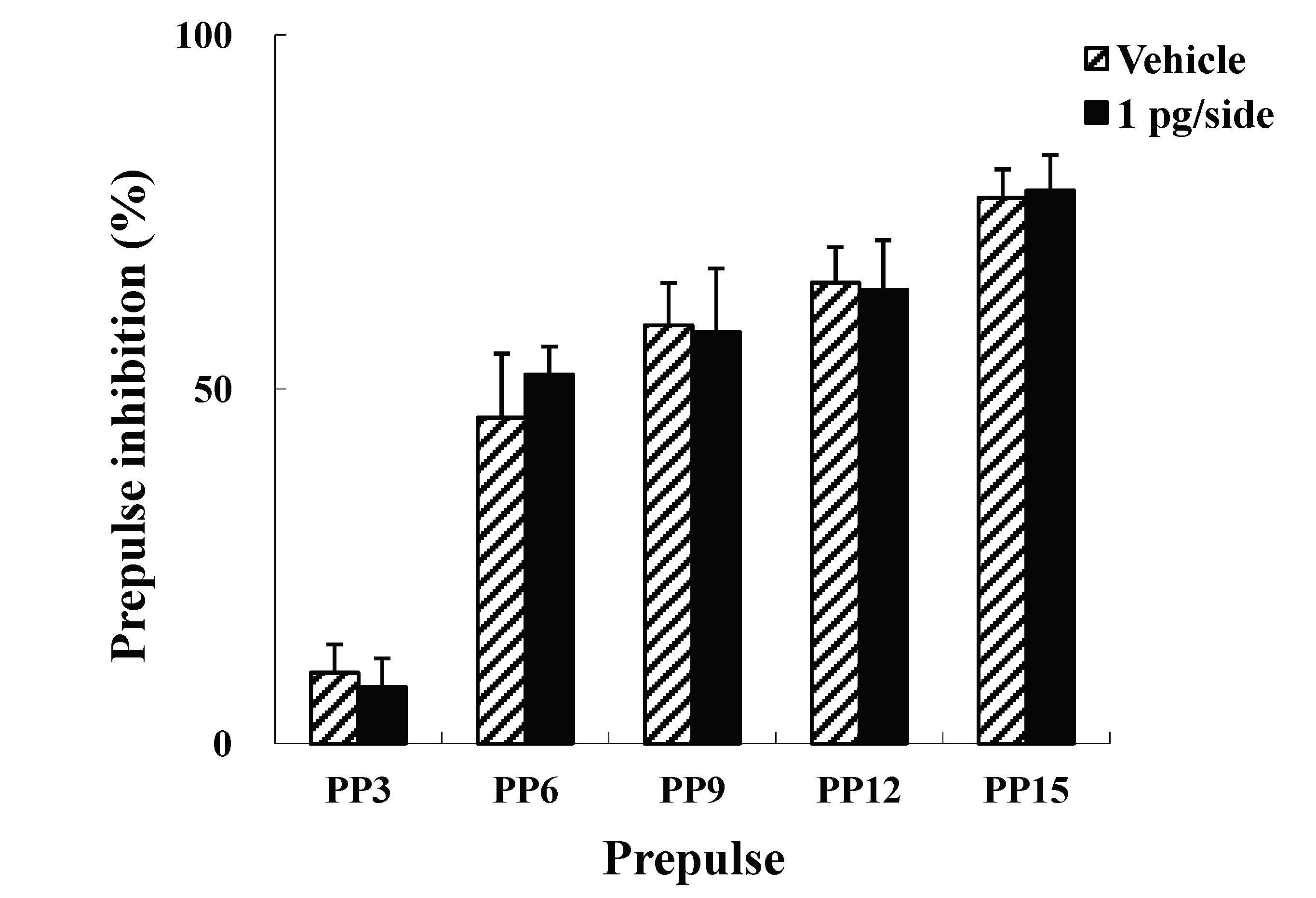 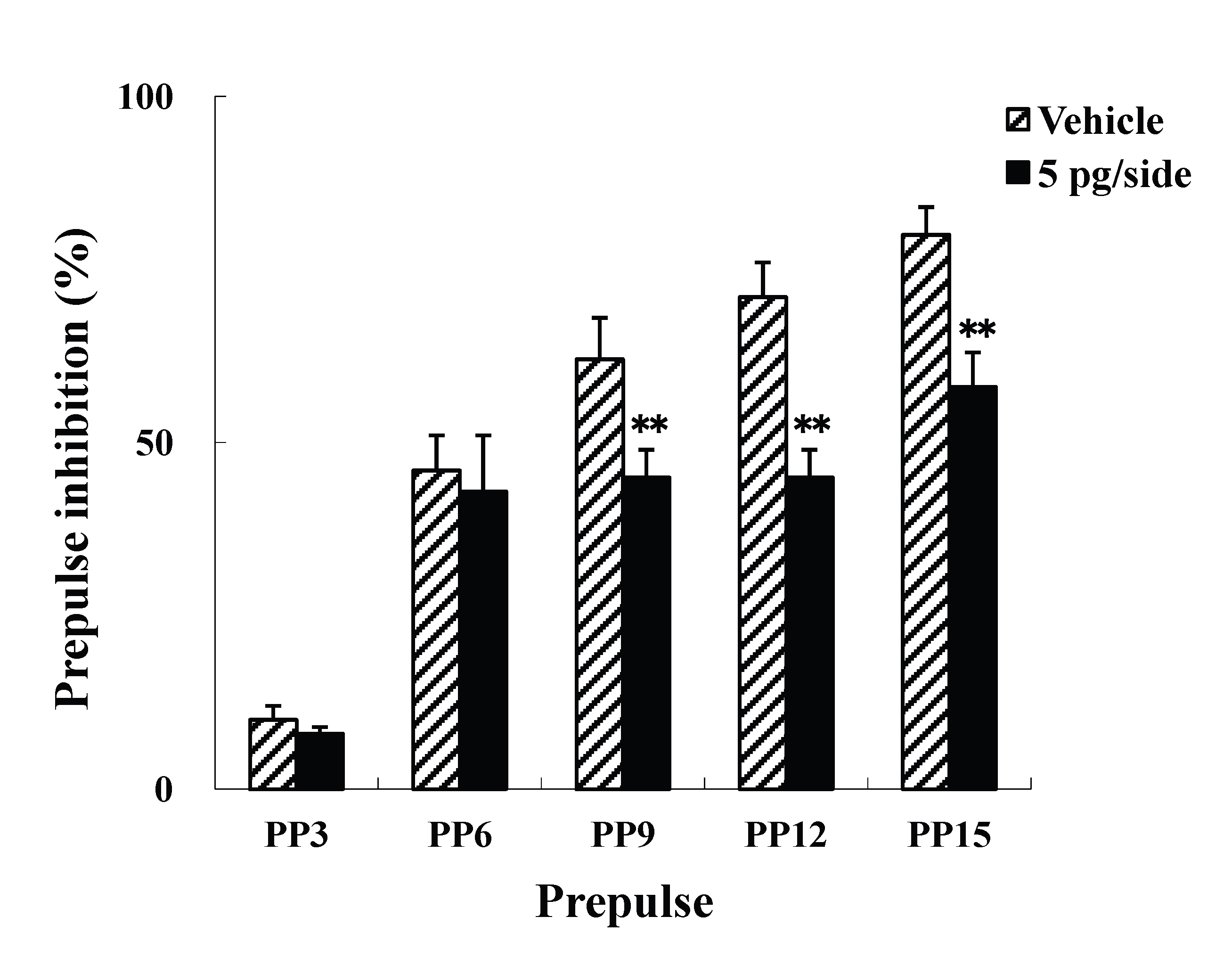 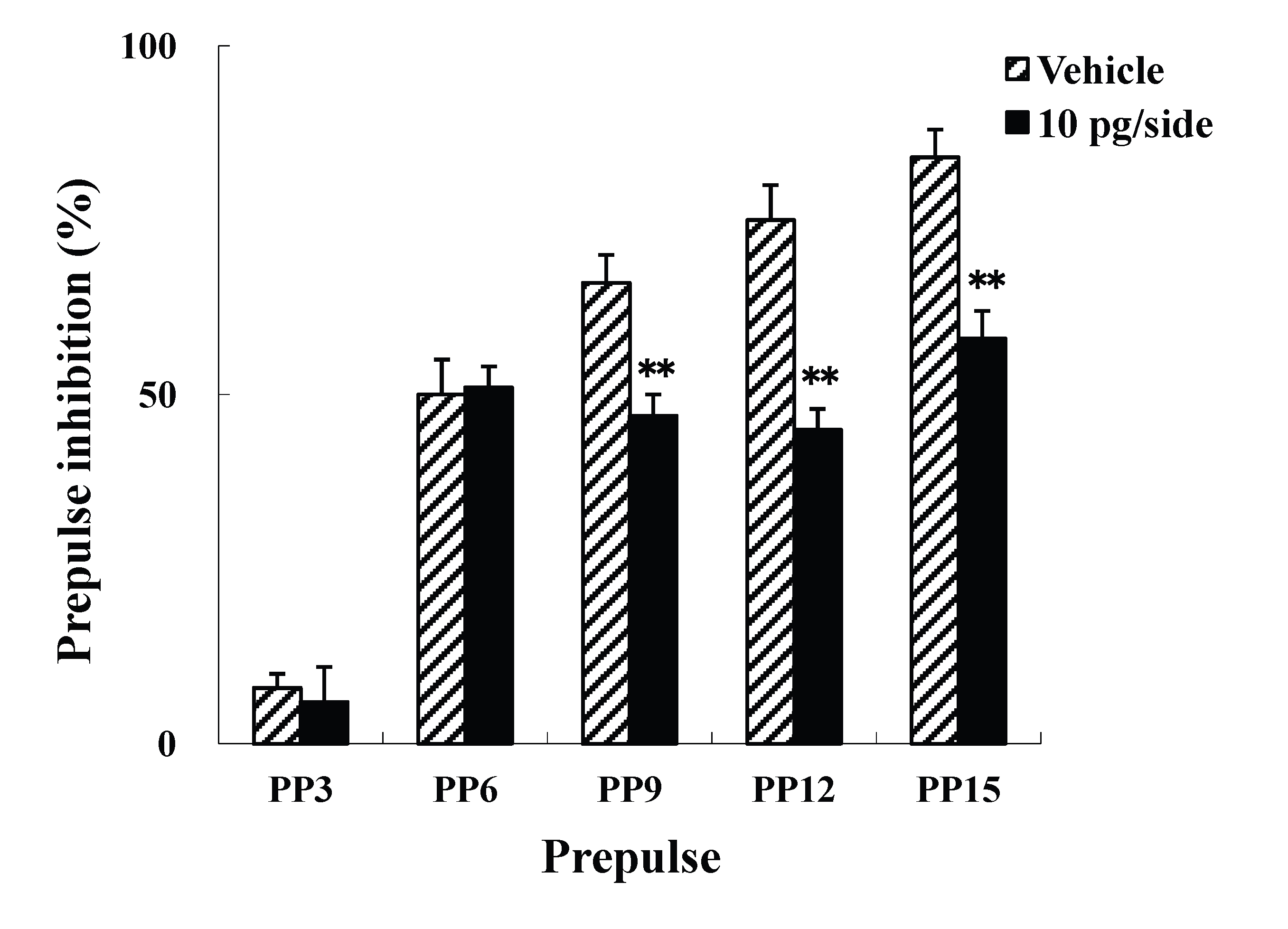 Figure 1. Mean startle amplitudes (A) and percent PPI (B, C, and D) in the vehicle- and ω-Conotoxin GVIA-injected mice. Data are expressed as the means ± SEM. *P<0.05, **P<0.01 compared to vehicle-injected mice.

Tables 1. Concentrations of monoamines and their metabolites in vehicle – and ɷ -Conotoxin GVIA –injected mice

Tables 2. Concentrations of 5-hydroxytryptamine and its metabolite in the brain

Deficiencies in sensorimotor gating contribute to the manifestation of a number of neuropsychiatric disorders. PPI refers to a reduction of the startle reflex following exposure to a weak-intensity prepulse that is administered immediately prior to a startle stimulus; this is a well-established method used to evaluate sensorimotor gating [4]. In clinical populations, there is a disruption of PPI in a majority of schizophrenic patients [5]. Over the past decade, experimental studies using neuroanatomical, pharmacological, behavioral, biochemical, and genetic manipulations have been useful for the elucidation of the neural circuitry underlying PPI [4]. These findings have also provided insight into the pathophysiologies of several forms of mental illness that are characterized by disruptions in sensorimotor gating. As a first step to understanding the role of Cav2.2-mediated signaling during sensorimotor gating, the present study examined this relationship using pharmacological, behavioral, and biochemical approaches.

The present findings demonstrated that mice receiving i.c.v. injections of ω-Conotoxin GVIA exhibited deficits in PPI. It has been shown that PPI is disrupted by the inhibition of dopaminergic [22,23] or serotonergic [24-26] signaling or by manipulations that decrease DA transmission in the prefrontal cortex [27-29]. In the present study, mice that received injections of ω-Conotoxin GVIA exhibited significantly decreased DA levels in conjunction with significantly increased DA turnover in the frontal cortex. It is possible that the increased DA turnover (DOPAC/DA and HVA/DA) was accompanied by decreased DA levels in the mice treated with the Cav2.2 blocker. Regardless, these results indicate that the dopaminergic hypofunctionality detected within the frontal cortical circuitry of ω-Conotoxin GVIA-injected mice might underlie the observed deficits in PPI. The ω-Conotoxin GVIA-injected mice also showed decreased levels of 5-HT in the striatum. This is consistent with a previous report that intraperitoneal injections of the 5-HT synthesis inhibitor para-chlorophenylalanine and microinjections of the 5-HT neurotoxin 5,7-dihydroxytryptamine into the dorsal and median raphe nuclei depleted striatal 5-HT levels and disrupted PPI [30]. Thus, decreased levels of 5-HT in the striatum may also result in PPI deficits. In contrast, there were no significant differences in NE content between the vehicle-injected and ω-Conotoxin GVIA-injected mice, even though the injections of ω-Conotoxin GVIA had a tendency to decrease NE levels relative to vehicle injections.

In conclusion, the present study showed that the inhibition of Cav2.2-mediated signaling by the specific Cav2.2 blocker ω-Conotoxin GVIA induced deficits in sensorimotor gating. The deficits of sensorimotor gating are observed in a majority of schizophrenic patients [4]. The present findings indicated that there were significant relationships between Cav2.2-mediated signal transduction and the dopaminergic and serotonergic systems that likely underlie the expression of various neuropsychiatric disorders. These results are similar to those of a previous study [21] which reported that Cav2.2 knockout mice exhibit deficits in PPI as well as altered DA and 5-HT release. Thus, abnormalities in Cav2.2-mediated neuronal circuits might contribute to the basic pathophysiological mechanisms underlying schizophrenia.

The authors declare no competing interests.

WL and ET designed and supervised the research, and wrote the manuscript. YZ and KN performed the behavioral and biochemical experiments. All authors read and approved the final version of the manuscript.

©2015 Zhou Y. This is an open-access article distributed under the terms of the Creative Commons Attribution License, which permits unrestricted use, distribution, and reproduction in any medium, provided the original author and source are credited.

Tables 1. Concentrations of monoamines and their metabolites in vehicle – and ɷ -Conotoxin GVIA –injected mice

Tables 2. Concentrations of 5-hydroxytryptamine and its metabolite in the brain

Figure 1. Mean startle amplitudes (A) and percent PPI (B, C, and D) in the vehicle- and ω-Conotoxin GVIA-injected mice. Data are expressed as the means ± SEM. *P<0.05, **P<0.01 compared to vehicle-injected mice.