Open bite malocclusion should not be regarded as a disease entity; instead it should be viewed as a clinical manifestation of underlying discrepancies.

Aim: The current study aimed at elucidating the underlying skeletal and dental components of open bite malocclusion, the significance of the contribution of each one, and whether certain correlations existed between them.

Material and methods: Dental and skeletal measurements were performed on lateral cephalometric radiographs and study models of 79 open bite cases. Statistical analysis of the performed measurements was undertaken.

Conclusions: The flattened curve of Spee, mandibular plane angle, proclination of upper incisors and the gonial angle were the highest contributing components in open bite malocclusion cases. The analysis of open bite components could help the clinician design an individualized mechano-therapy addressing the underlying cause.

Open bite malocclusion is one of the highly challenging orthodontic problems. The prevalence of anterior open bite ranges from 1.5% to 11% and varies between ethnic groups according to chronologic and dental ages [1]. Proffit et al. recorded a prevalence of approximately 3.5% in patients from 8 to17 years of age [2]. From an expert orthodontist's point of view the challenging nature of open bite should not be restricted to the treatment mechanics. Instead, the clinician should be aware of the multifactorial nature of this type of malocclusion, including the components and factors that contribute to the decision making process. However, the etiology of open bite comprises a number of muscle malfunctions and abnormal habits, yet a developed Open bite malocclusion overlies a multitude of skeletal and dental discrepancies [3]. Thus, in order to yield successful treatment outcomes and decrease the chances of relapse, an open bite case should be approached through addressing its underlying components.

Most of the studies targeting the open bite problem have focused on the different treatment techniques and modalities especially the intrusion of posterior teeth [4,5]. With the emergence of the era of skeletal anchorage, many studies have investigated some innovative techniques concerning the issue of maxillary molars intrusion utilizing mini-plates and mini-implants [6-8]. Meanwhile, the studies analyzing the etiologic factors and the components of open bite have been scarce.

Those few studies have focused on comparing the skeletal and dento-alveolar features of certain groups; ethnic groups [9] or groups with different Angle classifications [11] associated with open bite as compared to control groups without open bite. Beane et al. [9] conducted a cephalometric comparison of black subjects, 51 with open bite and 52 without open bite, which was used to identify skeletal and dental differences between the two groups. They found that, the vertical skeletal pattern and the greater degree of dental proclination differentiated black patients with an anterior open bite from those without open bite. Arat et al. [12] divided a total of 77 anterior open-bite cases visually according to the offending etiologic factor into 3 groups; skeletal, functional or combination and they found that more than half of the cases assessed as hyper-divergent were classified as functional.

Ellis and McNamara, 1984 and Ellis, McNamara and Lawrence, 1985 [9,10], divided a Class III and Class II sample respectively into 2 groups with and without open bite, and they concluded that the open bite groups had deformities in the maxillary and mandibular skeletal components. They stated that, open bite treatment is prone to failure if it didn’t address the underlying deformity and that their study didn’t analyze the spectrum of the skeletal and dental components of Class III open bite malocclusion.

The sample comprised pretreatment lateral cephalograms and study models of 79 patients with open bite, selected from approximately 5500 patient records at the Outpatient Clinic of the Department of Orthodontics, Cairo University. The subjects’ age ranged between 16 to 22 years, and their selection was based on the following criteria:

The following measurements were utilized in the study: 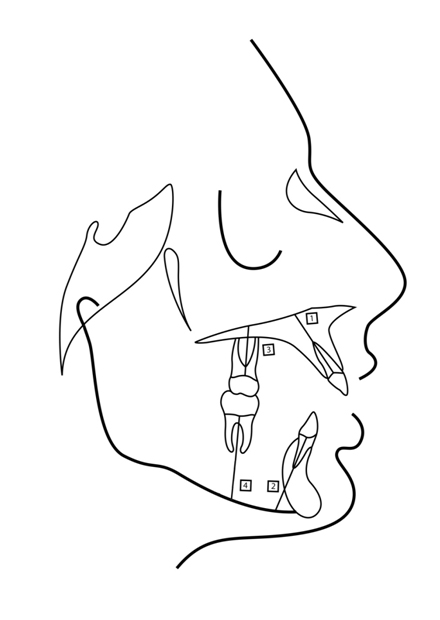 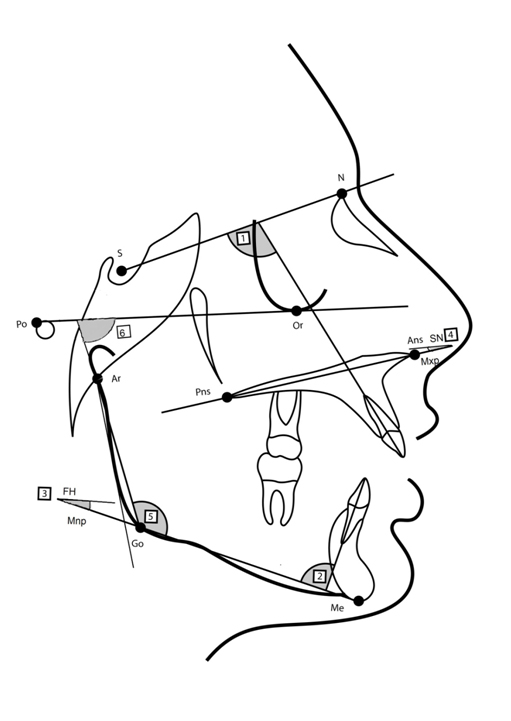 Cephalometric and cast measurements of 10% of the sample were repeated by both the same observer and by a second observer to measure the intra- and inter- observer reliability.

Table 4. The significance of contribution of the skeletal components to open bite, utilizing hypothesis t-test.

Figure 3. The Percentages of occurrence of all components in open bite malocclusion. 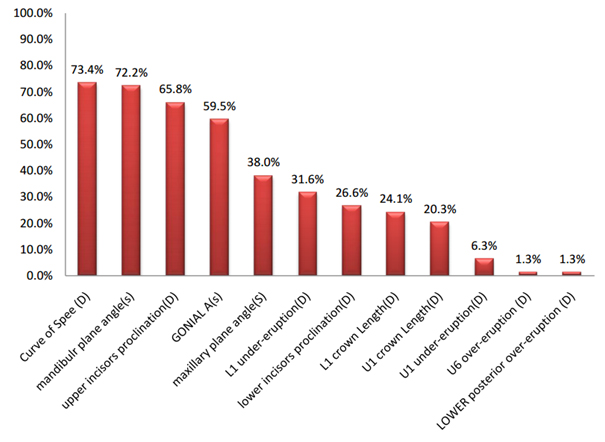 Figure 4. The percentages of occurrence of dental components in open bite malocclusion. 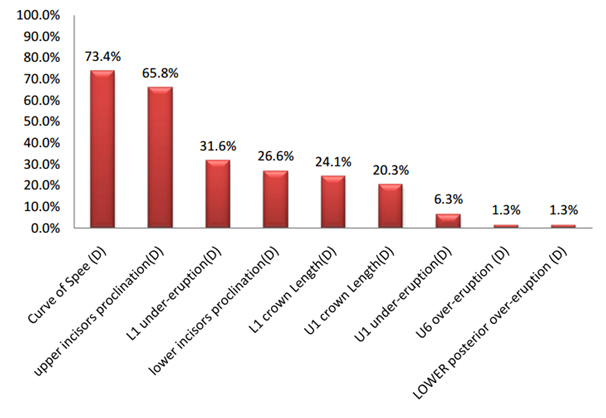 The mean, standard deviation, and the percentage of contribution of the different dental and skeletal components in open bite malocclusion

Table 5. The mean, standard deviation of the different dental and skeletal components in open bite malocclusion.

Figure 5. The percentages of occurrence of skeletal components in open bite malocclusion. 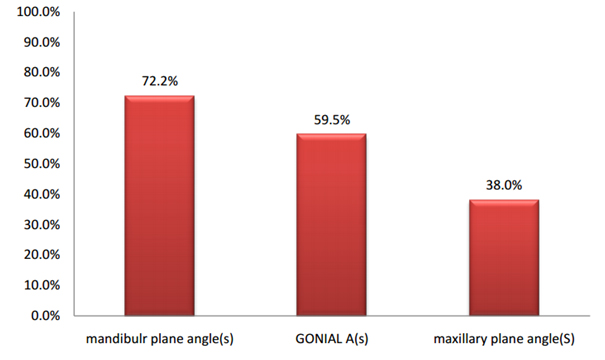 The significance of the contribution of each of the measured components 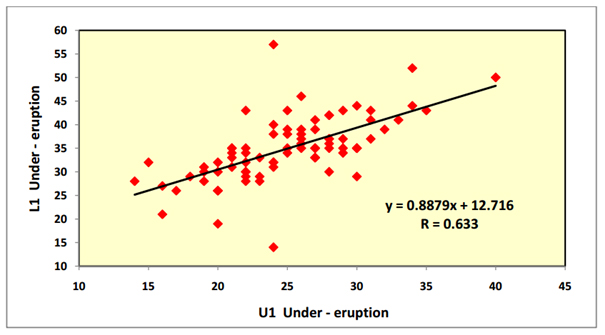 An open bite is defined as a lack of vertical overlap or contact between the upper and lower incisors in any sagittal relationship. The etiology of anterior open bite is multi-factorial. The most common causes include an unfavorable growth pattern, enlarged lymphatic tissue, digit sucking habit, unfavorable tongue and orofacial muscle activity, neurologic impairment of the control of orofacial muscle function and abnormal tongue size and posture. Open bite should not be considered as a disease entity; instead it actually represents a clinical manifestation of underlying dental and skeletal discrepancies. Studies addressing open bite malocclusion have focused on the various treatment techniques and modalities. Subsequently, the analysis of the sharing components in open bite malocclusion is still deficient.

Studies investigating the component perspective of open bite have only focused on comparing the skeletal and dental characteristics of an open bite group with a control one, overlooking the deep analysis of the sharing components in the malocclusion. Ellis, McNamara and Lawrence, 1985 [10] divided a Class II sample into 2 groups with and without open bite and they concluded that the open bite group deformity was mainly in the skeletal variables of both the mandible and the maxilla recommending the need for surgical intervention to correct the malocclusion.

On the other hand, it was found, in a sample of 77 open bite cases, that more than half of the cases which were assessed as hyper-divergent to be of a functional etiologic origin [12]. In the latter study, the authors compared an open bite sample with different Angle's classifications to a Class I control group. Although, the functional perspective is considered an important etiological factor in the development of open bite, it was not considered in the current analysis as our study aimed at elucidating the various skeletal and dental components after the development of the malocclusion using cephalometric and cast analyses, rather than exploring the origin of the vertical discrepancy. Thus, targeting to aid the clinician in the decision making process during the treatment planning phase.

From the prominent findings of the present study was that the skeletal components, whether maxillary or mandibular, have a high contribution in the developed open bite malocclusion. The higher contribution of the skeletal components in a progressing open bite implies that, the early intervention in a young age to induce orthopedic correction of the condition is beneficial. It has been proven previously that the growing open bite subjects should be treated early in the pubertal growth spurt meanwhile the late period of the pubertal spurt was suitable for the treatment of growing deep bite subjects [13].

The high contribution of both the steepness of the mandibular plane, and increased gonial angle was significantly higher than the counter-clockwise rotation of the maxilla. Accordingly, from the clinical perspective, the orthopedic modification of the mandibular growth direction and angulation early during the growth spurt should be considered; so as to redirect the growth in a more horizontal direction. The same applies for the surgical correction of severe open bites, where mandibular osteotomies are to be taken into consideration rather than altering the position and orientation of a normal maxilla.

Regarding the dental components the inclination of the upper and lower incisors [14] and the reverse curve of Spee had a significant contribution in most open bite cases. It was advocated previously that the extraction of premolars would aid in reducing the lower facial height and flattening the mandibular plane angle [15]. According to the findings of the current study, it should be stressed that the extraction mechanics in open bite treatment would aid both in normalizing the inclination of the incisors together with leveling of the lower curve of Spee.

The awareness of the contributing dental and skeletal components of the open bite malocclusion, would aid the clinician in the process of treatment planning. The orthodontist would be competent to customize the treatment mechanics required for every individual open bite case. Moreover, translating the results of the current study would clarify the importance of the early treatment of open bite; overcoming the developing skeletal deformity in a growing child and modifying the extraction decisions in such cases.

©2015 Mostafa YA. This is an open-access article distributed under the terms of the Creative Commons Attribution License, which permits unrestricted use, distribution, and reproduction in any medium, provided the original author and source are credited.

Table 4. The significance of contribution of the skeletal components to open bite, utilizing hypothesis t-test.

Table 5. The mean, standard deviation of the different dental and skeletal components in open bite malocclusion.

Table 6. The significance of contribution of the dental components to open bite, utilizing hypothesis t-test.