Periapical abscess of a lower central incisor associated with a tongue piercing: A case report

Piercings of the oral cavity has become increasingly popular amongst youth in western society, with some studies indicating a prevalence of 5.2% [1].  This popularity in certain fashion trends presents a growing problem for oral health professionals due to emerging evidence of its associated oral complications.

This case describes a periapical lesion of tooth 41 associated with a large metallic tongue piercing, a complication which to our knowledge, has not been described in the literature previously.

A 29-year-old female presented complaining of an extruded and mobile tooth 41 (Figure 1).  Patient first noticed the tooth was slightly extruded over a year ago and was concerned about it becoming increasingly mobile since.  She denied any pain or symptoms associated with the tooth.  Patient could not recall any history of trauma though mentioned she had worn a large metal tongue piercing for the past 11 years (Figure 2).  Although she denied any habit of biting or tapping of the piercing against the teeth, she stated that it would occasionally hit the lower anterior teeth when moving her tongue or brushing her teeth. 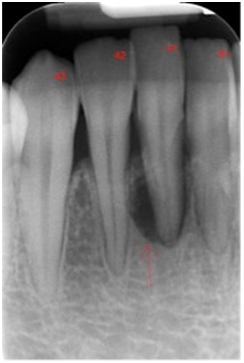 Clinical examination revealed grade two mobility of tooth 41.  The buccal and lingual gingival mucosa were slightly inflamed and displayed 5 mm of recession on the buccal surface, and 6 mm of recession on the lingual surface. A wear facet was evident on the cingulum area of tooth 41.  There was no evidence of any caries, cracks, fractures or discolouration.  The tooth was not tender to percussion and thermal testing revealed a sluggish yet positive response to cold stimuli.

The radiographic and clinical findings suggested that the periapical lesion was of endodontic origin.  The large metallic barbell was determined to be the causative agent of the dental injury.

The first and perhaps most important step in treatment was removal of the underlying cause. After careful explanation of her diagnosis and the risks of the oral piercing, the patient was happy to remove it.  Root canal therapy was then completed on tooth 41 and the patient asked to return for review in 3 months.

The development of gingival recession or tooth fracture following traumatic injury from an oral piercing has been well documented in the literature [2,3].  To our knowledge the formation of a periapical lesion from the constant mechanical trauma of an oral piercing has not been reported before.

The literature suggests that the size of the piercing, the length of time it is worn and patient habits have the greatest influence on complications [3,4,9,10].   Although the patient did not describe any specific habits, she had a relatively large metallic tongue piercing for a period of 11 years.

The radiographic finding of a well-defined radiolucency of tooth 41 is suggestive of periapical lesion of endodontic origin. Although the tooth did not have any evidence of caries, restorations, cracks or fractures, there was evidence of a wear facet on the lingual surface that was likely caused by the oral piercing.  Therefore it is likely that over time, the tooth suffered repeated traumatic insults from the large metallic piercing, rendering it non-vital.

Interestingly vitality and tenderness to percussion (TTP) testing appeared to be almost normal.  Cold testing with Endofrost revealed a sluggish yet positive response in tooth 41 and the tooth was not TTP.  Vitality testing with the cold test has a negative predictive value of 0.82 resulting in a 18% false positive rate [11].  Furthermore the chronic nature of the oral signs leads one to assume that degenerative and necrotic changes of the pulp are likely and that a slow positive cold test may indicate a partially necrotic pulp [12].  Chronic lesions may be asymptomatic with no tenderness to percussion [13] and frequently result in tooth mobility and extrusion [13].

This case highlights another complication brought on by the long-term use of large oral piercings.  Examination of such patients should involve evaluation for any obvious signs of trauma and also for more subtle clinical signs like wear facets.  These patients should be discouraged from wearing oral piercings and if not possible, oral health professionals should be prepared to provide information regarding the potential for complications and expensive dental treatment.

©2016Oztel M. This is an open-access article distributed under the terms of the Creative Commons Attribution License, which permits unrestricted use, distribution, and reproduction in any medium, provided the original author and source are credited.