Methods: A multicenter retrospective study was conducted.  A total of 247 cases with preterm placental abruption during 2009, derived from an electronic database constructed by the Japan Society of Obstetrics and Gynecology, were investigated as the subjects of this study, and were divided into three groups: very preterm (VPT, n=66) was delivered at 28 to 31 gestational weeks, preterm (n=56) was at 32 and 33 weeks, and late preterm (LPT, n=125) was at 34 to 36 weeks.  Risk factors, clinical course, and neonatal/infantile outcomes were compared.  Poor neonatal outcome was defined as stillbirth, or neonatal and infantile death, or cases with neurological disability at 2 years of age.

Conclusion: Administration of tocolytic agents is a possible factor in a poor neonatal prognosis in preterm placental abruption.  This finding may suggest that differential diagnosis could improve the prognosis.

Placental abruption is a disorder that can result in a serious outcome for both the mother and child.  It can still result in maternal death in Japan, and it accounts for one-third of perinatal deaths [1,2].  Therefore, early diagnosis and management are essential.  However, this disorder is expressed in a wide range of forms (onset can be relatively gradual in some cases and very dramatic after retro-placental hematoma in other cases), and there is still no effective strategy for diagnosis and prevention.  In a previous study, we found that the most effective markers for predicting a poor perinatal prognosis in placental abruption were Fetal Heart Rate (FHR) monitoring findings, particularly prolonged deceleration and repeated late deceleration [3].  Consequently, our findings suggested the importance of early diagnosis by means of fetal heart monitoring and pregnancy termination to improve the prognosis.  However, there is no reliable evidence regarding prediction and prevention of onset.  The reason for this is the fact that the etiology of this disorder has not been adequately elucidated.

Epidemiologic investigations have revealed many risk factors for onset of placental abruption.  They include primiparity, high maternal age at primiparity, male fetus, smoking habit, pregnancy-induced hypertension (PIH), threatened premature labor, chorioamnionitis, fetal growth restriction, and polyhydramnios [4-6].  Those investigations have suggested the involvement of an immunological mechanism or genetic mechanism [7,8].  Pathologically, this disorder can be viewed as occurring due to failure of adhesion of the placental villi and uterine decidua for some reason.  Ananth et al. [3] hypothesized that there were two pathways underlying the mechanism by which adhesion fails [4].  They suggested the presence of an acute process seen in the second trimester and a chronic process observed in the late third trimester.  It is understood that inflammatory cytokines are involved in the former, while the latter is associated with capillary endothelial injury.  Considering the pathological causes of this disorder, an investigation that takes into account the cause and timing of onset may be necessary.  The present study, which was limited to cases of preterm onset and excluded full-term onset, was conducted to uncover factors associated with a poor prognosis by stratifying patients by week of gestation.

A multicenter retrospective case-cohort study was conducted after being approved by our Institutional Review Board (certification number 2301).  This study was analyzed as a subcohort study from our previous report [3].  We reviewed the computerized chart records from the database of the Japan Perinatal Registry Network, which is managed by the Japan Society of Obstetrics and Gynecology, during the period from January 1 to December 31 in 2009.  This database, derived from 131 tertiary and/or secondary perinatal hospitals, including 76 university hospitals, 11 national hospitals, 11 Red Cross hospitals, and 33 other hospitals, covered 76,113 births after 22 gestational weeks, 7.1% of all deliveries (1,073,680 births in same period) in Japan.  In this database, 570 pregnant women were diagnosed with placental abruption during this study period.  The following exclusion criteria were included: placental abruption occurred at less than 28 or over 36 gestational weeks, unclear estimated confinement date provided by last menstruation period supported by early trimester ultrasound, twin gestation, chronic abruption oligohydramnios sequence [9], and cases lost to follow-up of the infant at 2 years of age.  The remaining 247 cases were investigated as the subjects in this study, and were divided into three groups: very preterm (VPT, n=66) was delivered at 28 to 31 gestational weeks, preterm (PT, n=56) was delivered at 32 and 33 weeks, and late preterm (LPT, n=125) was delivered at 34 to 36 weeks.  The distribution of study subjects is shown in Figure 1.  Maternal background factors, risk factors for placental abruption, clinical course factors, i.e., initial symptom, clinical signs confirming abruption, treatment, delayed time from onset to admission or from onset to delivery, and maternal ambulance transfer to perinatal medical center, were compared between these three groups.  Perinatal and neonatal/infantile outcomes were also compared. 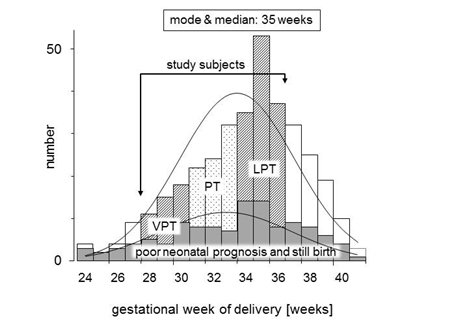 Figure 1. Distribution pattern of subjects in this study by gestational week.

Obstetrical and other complications were defined as follows: PIH was defined according to the criteria of the National High Blood Pressure Education Program [11], chronic hypertension was defined as hypertension before pregnancy or diagnosed before 20 gestational weeks, and previous abruption was defined as cases that experienced placental abruption in a previous pregnancy.  Obstetric Disseminated Intravascular Coagulation (DIC) score was calculated with a unique scoring system previously reported [12,13], which is a very popular scoring system in Japan.  The patient is regarded as having DIC when this score is 8 or more.  Threatened premature labor was defined as one or more symptoms of atypical genital bleeding, labor pain, and cervix dilatation.  In cases of threatened premature labor, tocolytic therapy was needed.  Usage of tocolytic agents was as follows.  Ritodrine hydrochloride was administered intravenously at an initial dose of 50 μg/minute, increased by 50 μg/minute every 10-20 minutes up to a maximum dose of 200 μg/minute, until labor pains disappeared.  Poor neonatal outcome was defined as stillbirth or Intrauterine Fetal Death (IUFD), or neonatal and infantile death, or cases with neurological disability at 2 years of age.  Favorable neonatal outcome was defined as cases without any adverse neurological outcomes in an infantile survey at 2 years of age.

Statistical analyses were performed with a computer program: Statflex 6.0 (Artech Co., Ltd., Osaka, Japan. URL: http://www.statflex.net/).  Values are shown as means ± Standard Deviations (SD) or the number with percentage.  Analysis of variance with post hoc test or kai square test was performed as an evaluation in the mean difference or in the proportional difference, respectively.  A p value less than 5% was considered to be significant.  Multiple logistic regression analysis was performed to clarify the most influencing factors for poor neonatal/infantile outcome.  Relative risk was presented as the odds ratio with 95% confidence intervals (OR [95%CI]).

Table 1. Clinical characteristics and comparisons of the study subjects.

Values are shown as mean ± SD or the number with percentage.  Statistical analysis was performed by analysis of variance with post hoc test* and chi-square test†.

The tocolytic agents used during this study was ritodrine hydrochloride.  Based on the results of this investigation, we inferred that the use of the tocolytic agents exacerbated the prognosis of placental abruption, but we could not determine whether repression of labor pain was the cause or the drug was the cause.  It has been demonstrated in vitro that beta2-stimulants suppress contraction by acting on uterine smooth muscle.  However, it is not known how they act on peripheral vessels.  There are several interesting reports regarding this.  Saller et al. [20] reported that use of tocolytic agents was effective for improving the neonatal prognosis in cases with bleeding in the third trimester [20].  A similar report was published by Towers et al. [21].  Their investigation included cases with placenta previa, suggesting that it differs from our investigation of placental abruption only.  The results of their investigation showed that the use of tocolytic agents for placenta previa at least alleviated bleeding.  Therefore, it is surmised that it is unlikely that ritodrine hydrochloride is the cause of placental abruption or the cause of a poor prognosis.

The biggest limitation of this study could be the fact that it is a retrospective study.  Because it is a multicenter study, it is unclear whether the entry criteria were the same.  That is to say, the subjects registered may not be uniform.  Furthermore, we were not able to determine by what mechanism use of tocolytic agents caused poor neonatal outcomes in subjects who developed placental abruption.  A large-scale investigation such as a nationwide study may need to be carried out.  Moreover, appropriate evaluation of intrauterine infection that takes into account the timing of onset may be necessary.

In conclusion, the present study showed that use of tocolytic agents is a possible factor that causes poor neonatal outcomes in preterm placental abruption.  We were not able to establish that intrauterine infection was a cause, but the present findings suggest that follow-up observation during the first 10 hours after onset may improve the neonatal prognosis.

©2015 Ogawa M. This is an open-access article distributed under the terms of the Creative Commons Attribution License, which permits unrestricted use, distribution, and reproduction in any medium, provided the original author and source are credited.

Figure 1. Distribution pattern of subjects in this study by gestational week.

Table 1. Clinical characteristics and comparisons of the study subjects.

Values are shown as mean ± SD or the number with percentage.  Statistical analysis was performed by analysis of variance with post hoc test* and chi-square test†.