The life-span of the tooth is intimately-associated with healthiness of periodontal ligament (PDL) which is a connective tissue situated between bone and cementum that covers tooth root surface. However, once this tissue is severely damaged by deep caries, periodontitis, and trauma, this leads to severe difficulty in its regeneration, resulting in tooth loss and decreased quality of life. The development of the therapy for generation and regeneration of the periodontal tissue is an urgent issue. Therefore, researchers have tried to improve efficiently-generative and regenerative medicine using stem cells, signal molecules, and scaffolds, requisite for tissue regeneration.In recent studies, a dental follicle tissue that is composed of stem cell population potentially differentiating into PDL tissue, cementum, and alveolar bone is of current interest. More recently a revolutionary and attractive studyreporting the development of bio-hybrid implant that reserved newly-formed cementum/PDL tissue complex on its surface was introduced.In this review, we describe comprehensive reports that tried to develop the cementum/PDL complex by tissue engineering and future prospects.

Structure and function of the periodontal tissue

The periodontal tissueis composed of four major tissues: periodontal ligament (PDL) tissue, cementum, alveolar bone, and gingival tissue.PDL tissue is composed of heterogeneous cell populations, various extracellular proteins including collagens, elastic system fibers, fibronectin, osteocalcin, proteoglycans, vitronectin, and matricellular proteins, nerve fibers, and blood vessels [1]. PDL cell population includes fibroblasts that are principal cells in PDL tissue [2,3], PDL stem cells (PDLSCs), epithelial cell rests of Malassez that are descendants of the Hertwig’s epithelial root sheath (HERS), endothelial cells, and others. Especially, PDLSCs have the potentials to differentiate into PDL fibroblasts, cementoblasts and osteoblasts [4-6]. Aged PDLSCs decrease tissue regenerative potential, but they can be restored by the extrinsic microenvironment, suggesting the retention of their plasticity [7]. Thus researchers have tried to characterize PDLSCs for generation and regeneration of the periodontal tissue in the last decade.

The central role of PDL tissue is to connect tooth root through cementum to the bone socket by forming the Sharpey’s fibers, which are composed of collagen bundles that insert their terminus into cementum and bone surfaces. This function is essentially maintained by three dimensionalstructure of collagens and elastic system fibers.Other functions involve cushioning mechanical stresses such as compressive and tensile forces arisen by mastication, and adjusting bite force depending on food hardness via sensory nerve located in the PDL tissue. Thus, it is not an exaggeration to say that PDL tissue determines the life-span of tooth.

Dental tissue-derived mesenchymal stem cells, such as PDLSCs and dental follicle progenitor cells (DFPCs) were characterized with respect to their feasibility of PDL-like and cementum-like formations [13]. Cementogenesis is indispensable in PDL tissue formation and reformation.

Sonoyama et al. developed the ‘bio-root’ by using PDLSCs and stem cells from apical papilla with tooth root-shaped hydroxyl apatitetri calcium phosphate (HA/TCP), and showed the formation of PDL tissue on the surface of the ‘bio-root’ when transplanted in swine [14]. Although they did not show apparent cementum deposition on the HA/TCP, this group improved the ‘bio-root’ by utilizing the PDLSC sheet, showing the defined periodontal tissue structure including cementum-like formation [15].

In addition, PDLSC pellet,PDL cell sheet, PDLSCs cultured with conditioned medium from developing apical tooth germ cells have been introduced to construct cementum/PDL complex in vivo [16-18]. A recent study described the pivotal role of HERS that appears during root formation in cementogenesis as well as root formation [19].

As scaffolds for periodontal construction and reconstruction, two types have been used: synthetic and natural materials that include degradable or nondegradable properties [46]. As synthetic degradable materials, polyethylene glycol, poly-lactic acid (PLA), poly-Llactic acid, poly-glycolic acid, poly(lactic-co-glycolic acid), poly(L-lactide-co-D,L-lactide), polycaprolactone, polyvinyl alcohol, poly(2-hydroxyethyl methacrylate) (PHEMA), and polymethylmethacrylate (PMMA) and PHEMA composites have been studied, while PMMA, polytetrafluoroethylene, and 4-methacryloxyethyl trimellitate anhydride/methyl methacrylate (4-META/MMA) have been advanced as synthetic nondegradable materials. On the other hand, as natural materials, alginate, agarose, chitosan, collagen, atelocollagen, gelatin, fibrin, and hyaluronic acid have been examined. In addition, Ceramics such as hydroxyapatite and β–TCP have also been investigated about their potentials for tissue generation.

DF is a mesenchymal tissue sac surrounding tooth germ and appears only during tooth development [47]. DF cells show self-renewal and multipotency to differentiate into osteoblasts, adipocytes, and neurocytes in vitro [48,49]. In addition, DF reportedly possesses various intermediate progenitors that differentiate into PDL fibroblasts, cementoblasts, and osteoblasts [11,12]. Therefore, researchers have pursued potentials of these cells in generating and regenerating cementum/PDL complex.

Kemoun et al. reported cementoblastic differentiation of human DF cells cultured with enamel matrix derivatives [50]. Guo et al. demonstrated thecementum/PDL construction by rat DF cells on the surface of EDTA-treated dentin matrix in vivo using a rat model [51]. Recently an interesting study was reported, showing that when rat adipose tissue-deprived stem cells (ADSCs) were cultured in DF cell-conditioned medium supplemented with an inhibitor of the Wnt pathway, ADSCs differentiated into cementoblast-like cells, suggesting contribution of Wnt/-β -catenin pathway in cementogenesis [52]. By contrast, another study showed that HERS regulates osteogenic differentiation of DF cells through the Wnt pathway, and that Wnt3a enhanced the differentiation of DF cells [53]. Thus the roles of the Wnt signal pathway in constructing cementum/PDL complex remain to be solved.

In this context, Oshima et al. reported the revolutionary study concerning the development of the ‘bio-hybrid dental implant’ that is a hydroxyapatite-coated titanium covered by murine DF tissue at ED 18.5, which was detached from developing tooth germ [54]. They demonstrated the development of functional cementum/PDL tissue complex including the formation of the Sharpey-fibers, and innervation around this implant, which allowed to response to orthodontic force, and to restore vertically lost bone defect, indicating features very similar to natural tooth.

The longevity rate in many countries of the world is getting longer. In such circumstances, to avoid tooth loss and to retain ones’ own teeth as many and long as possible lead to maintaining their quality of life. Of course, replacement therapy with osseo-integrated implants is current mainstream, but a statistical study performed in the USA showed that many people desire to keep and use their own teeth during their lifetime even though patientswho experienced successful implant treatment [55]. As described above, a report by Oshima et al. opened the way for generation and regeneration of periodontal tissueby using DF cells from tooth germ at temporally-limited stage of development, while it was restricted to murine specimen [54]. Therefore considering clinical practice in patients for structuring human periodontal tissue with much larger size, researchers need to clarify the characteristics of DF cells at 18.5, comparing with those at other stages or PDLSCs, and how they can obtain such DF-like cells from bone marrow mesenchymal stem cells (BMMSCs), induced pluripotent stem (iPS) cells or other mesenchymal stem cell sources(MSCs) because the quantity of PDLSCs localized in PDL tissue is too small to use in clinical use while PDLSCs are naturally eligible (Figure 1). In addition,which bioactive scaffolds and multifunctional signal molecules support the differentiation of these stem cells also remains to be determined.Sufficient assessment of outcomes from integration of these elements from various aspectsis needed for restoration ofperiodontal function. 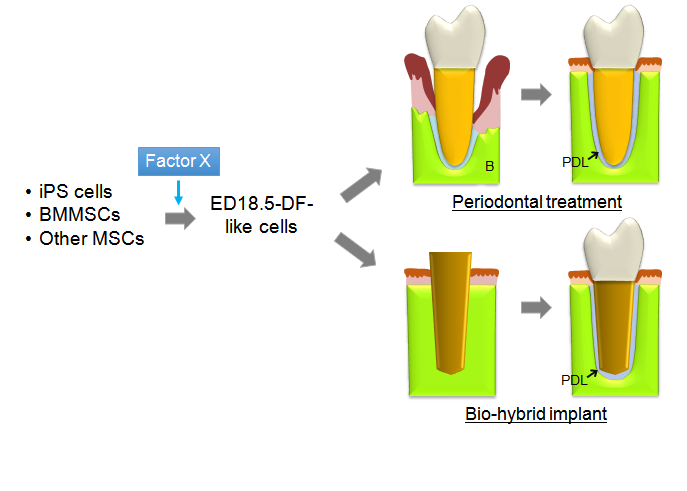 Figure 1. Schema representing the next-generative therapy by tissue engineering using induced DF-like cells. iPS cells, BMMSCs, and other MSCs could be directed toward DF-like cells by factor X that is needed to be identified by characterizing DF cells at ED 18.5. The development of this novel and promising therapy will permit generation and regeneration of periodontal tissue. B, Bone; PDL, Periodontal ligament.

Copyright: ©2014 Maeda H. This is an open-access article distributed under the terms of the Creative Commons Attribution License, which permits unrestricted use, distribution, and reproduction in any medium, provided the original author and source are credited.

Figure 1. Schema representing the next-generative therapy by tissue engineering using induced DF-like cells. iPS cells, BMMSCs, and other MSCs could be directed toward DF-like cells by factor X that is needed to be identified by characterizing DF cells at ED 18.5. The development of this novel and promising therapy will permit generation and regeneration of periodontal tissue. B, Bone; PDL, Periodontal ligament.