Regucalcin, a novel regulatory protein implicated in obesity and diabetes

Regucalcin was initially discovered in 1978 as a unique calcium-binding protein that is a suppressor in intracellular calcium signaling. The regucalcin gene (rgn) is localized on the X chromosome and is identified in over 15 species consisting of regucalcin family. Regucalcin has been demonstrated to play a multifunctional role in cell regulation of calcium homeostasis, signal transduction, nuclear gene expression, cell proliferation and apoptosis in various types of cells and tissues. Moreover, regucalcin plays a pathophysiologic role in hyperlipidemia and diabetes. Liver regucalcin gene expression is stimulated through action of insulin in liver cells and decreased in type I diabetic model animals. Overexpreesion of regucalcin reveals hepatic insulin resistance, decreased liver triglyceride, total cholesterol and glycogen contents in the liver of rats, inducing a hyperlipidemia. Liver leptin and adiponectin mRNA expressions are decreased by overexpression of regucalcin. Deficiency of regucalcin induces an impairment of glucose tolerance and liver lipid accumulation in mice, and it is associated with the development and progression of nonalcoholic fatty liver disease and fibrosis in human patients. Regucalcin may be a key molecule in lipid metabolic disorder implicated in obesity and diabetes.

Obesity and diabetes are currently a major health problem worldwide with growing in prevalence. The incidence of metabolic disease, including type 2 diabetes with obesity, is increased to epidemic levels. Obesity and diabetes induce secondary diseases with various pathophysiologic states, which are important in clinical aspects including cardiovascular disease, neural disturbance, kidney disease, osteoporosis and cancer [1-6].

Regucalcin, which was discovered in 1978 [13,14], plays a multifunctional role as a suppressor protein in signal transduction in various cell types and plays a cell physiologic role in maintaining cell homeostasis for various stimuli [9,15-17]. Cytoplasmic regucalcin localizes into the nucleus, and it suppresses nuclear protein kinase and protein phosphatase activities and deoxyribonucleic acid and ribonucleic acid synthesis and regulates gene expression for various proteins [15]. Regucalcin has also been shown to suppress protein synthesis and activate proteolysis, suggesting a role as suppressor in protein turnover [9]. Moreover, overexpression of endogenous regucalcin has been demonstrated to suppress cell proliferation and apoptosis induced through multisignaling pathways in various cell types [16,17]. Regucalcin has been demonstrated to play a pivotal role in cell regulation in various type cell and tissues including liver, kidney, heart, brain and bone [9, 18-20].

Regucalcin transgenic (TG) rats, which overexpresses endogenous regucalcin,  have been shown to induce a remarkable of bone loss associated with increase in serum triglyceride and high-density lipoprotein (HDL)-cholesterol concentrations at the age of 36 weeks in vivo [22,23]. Serum free fatty acid, triglyceride, cholesterol or HDL-cholesterol concentrations were markedly increased in regucalcin TG male and female rats at 14-50 weeks of age [23]. Thus, hyperlipidemia associated with bone loss was found to induce in regucalcin TG rats with increasing age. This animal may be a useful tool in the aspects of lipid metabolic disorder and osteoporosis.

Leptin and adiponectine are adipokines that are involved in lipid metabolism [25]. Leptin mRNA expression in the adipose or liver tissues was found to decrease in regucalcin TG rats with aging [24]. Adiponectin mRNA expression was not changed in the adipose tissues of the TG rats, while its level was decreased in the liver tissues [24]. These decreases may be partly involved in hyperlipidemia induced in regucalcin TG rats. Regucalcin may play an important role in the disorder of lipid metabolism in the liver. The role of regucalcin in the regulation of lipid metabolism and implication with obesity and diabetes is summarized in Figure 1. 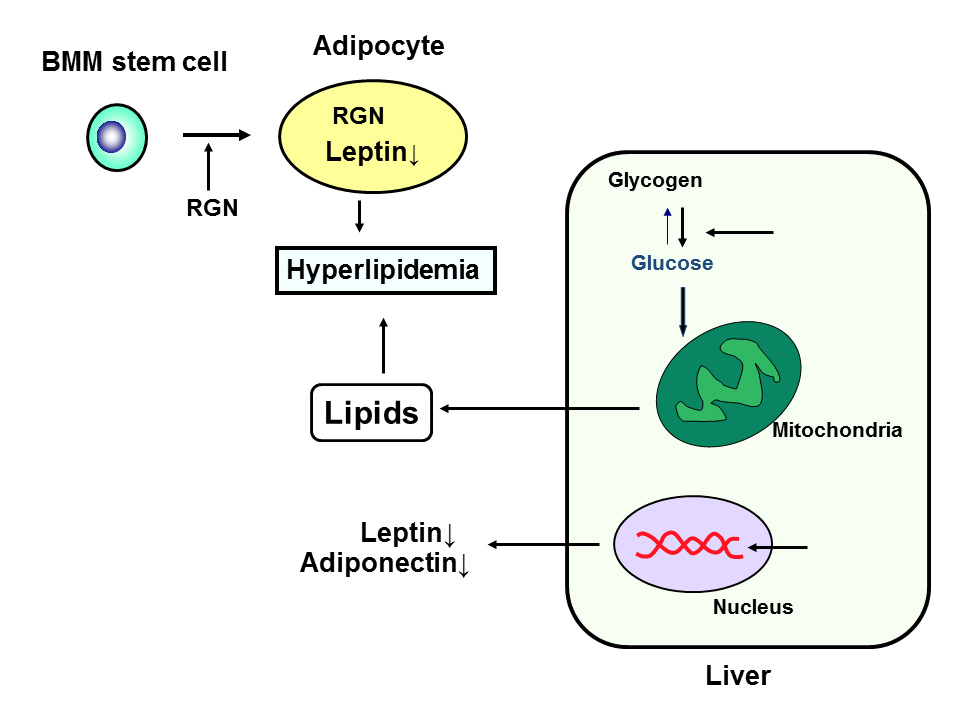 Figure 1. Role of regucalcin (RGN) in the regulation of lipid metabolism and implication with obesity and diabetes. RGN stimulates differentiation from bone marrow mesenchymal (BMM) stem cells to adipocytes, and it enhances adipogenesis and enhances triglyceride in the adipocytes. RGN suppresses leptin expression in adipocytes that regulate feeding. RGN stimulates glycolysis and production of in the liver cells, and it suppress adiponectin and leptin mRNA expression in the liver cells.

Deficiency of regucalcin has been reported to cause an impairment of glucose tolerance in regucalcin knockout (KO) mice [37,38]. Regucalcin KO mice caused a significant increase in blood glucose concentration and a decrease in serum insulin levels after glucose administration compared with wild-type mice in vivo [38], suggesting that regucalcin participates in the regulation of glucose metabolism related to insulin action. Regucalcin deficiency in mice caused an accumulation of neutral lipids and phospholipids in the liver and shortens the life span [37].  Hepatocytes, which were obtained from regucalcin KO mice at 12 months of age, was shown to contain many lipid droplets, abnormally enlarged mitochondria with indistinct cristae, and enlarged lysosomes filled with electron-dense bodies in the electron microscope as compared with that of wild-type mice [37]. Hepatic neutral lipids, total phospholipids, total triglyceride and cholesterol in regucalcin KO mice were found to markedly increase than those from age-matched wild-type mice [37].

Regucalcin is involved in insulin resistance

Regucalcin, moreover, has been demonstrated to stimulate glucose utilization and lipid production in H4-II-E cells in vitro [42]. Overexpression of endogenous regucalcin was found to stimulate the production of triglyceride and free fatty acid in H4-II-E cells cultured with or without the supplementation of glucose in the absence of insulin [42]. Regucalcin may stimulate lipid production that is linked to glucose metabolism in liver cells in vitro. The effect of insulin, which enhances medium glucose consumption, triglyceride and free fatty acid productions in liver cells cultured with glucose supplementation, was suppressed by overexpression of regucalcin in vitro [43].

Regucalcin may play a physiological role in lipid and glucose metabolism in the adipocytes and liver those are implicated in obesity and diabetes. Regucalcin, which its gene expression is enhanced by insulin, is identified as a molecule related to insulin resistance in liver cells. Deficiency of regucalcin impairs glucose tolerance and induces liver lipid accumulation. Overexpression of regucalcin stimulates hepatic glycolysis and lipid production. Disturbance of hepatic regucalcin gene expression may leads to disorders of lipid metabolism and insulin resistance in liver tissues, inducing a hyperlipidemia. Regucalcin may play a pathophysiologic role as a regulatory protein implicated in obesity and diabetes. Regucalcin may be a target molecule for therapy of these diseases.

The author has no conflicts of interest.

The author was supported by the Foundation for Biomedical Research on Regucalcin.

©2016 Yamaguchi.This is an open-access article distributed under the terms of the Creative Commons Attribution License, which permits unrestricted use, distribution, and reproduction in any medium, provided the original author and source are credited.

Figure 1. Role of regucalcin (RGN) in the regulation of lipid metabolism and implication with obesity and diabetes. RGN stimulates differentiation from bone marrow mesenchymal (BMM) stem cells to adipocytes, and it enhances adipogenesis and enhances triglyceride in the adipocytes. RGN suppresses leptin expression in adipocytes that regulate feeding. RGN stimulates glycolysis and production of in the liver cells, and it suppress adiponectin and leptin mRNA expression in the liver cells.