Department of Esthetic and Operative Dentistry, University of Szeged, Hungary

Department of Esthetic and Operative Dentistry, University of Szeged, Hungary

Although variable thread profile implants are getting widespread, literature on the success/failure associated with this implant type is scarce.

Nine patients were rehabilitated with fixed, screw retained dentures on four or six implants. Altogether 58 variable thread profiles, self-drilling mandibular and/or maxillary implants were inserted. The patients were followed up for 1.5 years. During this period, they were regularly checked for the clinical signs of implant failure. Bone levels were determined radio graphically, first immediately after implant insertion, and then at the 1.5- year follow-up. Bone loss was defined as the difference between the two measurements.

No implant failure or any complications occurred during the follow-up period. The results are similar to those reported in connection with cylindrical implants. The all-on-six technique yielded a significantly more favorable bone response than the all-on-four technique, which is probably due to the more favorable load distribution. However, the bone loss associated with the all-on-four technique was still within the range reported in connection with cylindrical implants.

The results allow us to assume that the bone response to variable thread profile implants applied according to the applied techniques is as favorable as when cylindrical implants are used.

Implant retained dental restorations have proven to be a good solution for the rehabilitation of edentulous patients. The literature indicates that the implant overdenture prosthesis provides predictable results - enhanced stability, function and a high degree of patient satisfaction compared to conventional removable dentures [1]. Still, experience shows that most dental patients, including those with alveolar bone atrophy, wouldprefer a non-removable solution if available.

The success of a non-removable implant retained dental restoration depends on two factors. First, the implants must be placed in a way that the cantilevers are kept short [2].  Second, the primary stability of these implants must be high enough to allow both immediate loading [3] and final rehabilitation without significant bone loss [4].

Prosthetic rehabilitation with a fixed, screw-retained denture on four or six implants is a viable concept as shown by Malo,et al.[5]. These techniques - often referred to as all-on-four and all-on-six - decrease cantilever length by introducing inclined implants in the distal positions. This way the entire dental arch can be safely rehabilitated. It was reported that the five- and ten- year survival rates of such replacements can be close to 100%, regarding both the implants and the prostheses. Duello [6] showed that the application of a fixed prosthesis on four implants is also supported by the principles of the basic sciences, and he proposed an evidence-based protocol for the immediate rehabilitation of edentulous patients based on this technique [7]. Indeed, this solution immediately reduces the morbidity associated with the loss of teeth, and the problems associated with traditional removable prostheses are also overcome. All in all, the principle appears to work if the implants meet the requirements.

The majority of the studies examining all-on-four and all-on-six were carried out using cylindrical implants. However, our knowledge regarding the not less widely used (and increasingly popular) variable thread profile dental implants is quite limited in this respect.

Generally, tapered implants appear to be superior to cylindrical implants for immediate loading[8-11], and the bone loss, according to the majority of the studies, is comparable[9,12,13]. One study found significantly less bone loss[14]. The insertion of a tapered implant requires a higher torque than the insertion of a straight, cylindrical implant[15]. This supports a more favorable outcome when tapered implants are used, as insertion torque has been demonstrated to be the most valid prognostic factor for the Osseointegration of immediately loaded splinted implants[16].

All in all, tapered implants appear to have a number of favorable characteristics, but little is known about the bone response if they are applied according to the all-on-four and all-on-six protocols for the purposes of prosthetic rehabilitation. Therefore, in this study we sought to throw some light on this issue. We sought to answer whether there is any difference between tapered and non-tapered implants in terms of Osseointegration as indicated by the bone response. Based on the literature we hypothesized that the application of tapered implants would yield a similar or more favorable bone response to what is seen when cylindrical implants are applied for the same purpose.

9 patients (4 men, 5 women; mean age: 61.45 yrs) participated in the study. The patients received fixed, screw-retained dentures on four or six implants, depending on bone availability and occlusal and financial considerations. The variable thread profile P7 dental implant of the SGS Dental Implant System (Schaan, Lichtenstein) was used. Beyond the variable thread profile, these implants have a condensing cone core, and extensive self-drilling is achieved by sharp threads at the apex. The implant-abutment connection is an internal hexagon, which minimizes the chance of microgap formation, and it allows optimal connection. The implants are coated with calcium-phosphate, which, in another study, has proven to have a beneficial effect on osseointegration[17].

The study design observed the guidelines of the Declaration of Helsinki in all respects. The patients were provided with information about the procedures involved in the study, and about the goals and possible risks as well, in both oral and written forms. Participation was voluntary: patients were enrolled in the study only upon having given their written consent.

Inclusion criteria were edentulousness or mandibles/maxillas with hopeless teeth in need of fixed implant restorations as requested by the patients. The treatment sessions took place in a private dental clinic, and all operations were performed by an experienced dental surgeon. Implant placement was performed observing the guidelines described by Malo, et al. [5,6,18,19]. In all cases a final torque of above 40 Ncm could be achieved, and the distal implants were placed in a inclined position.

Bone loss calculations were done according to published protocols [21-23]. Bone loss was defined as the distance between the fixture-abutment connection and the alveolar crest, and it was measured by analyzing the height of the alveolar crest line from both the distal and the mesial side of each implant (116 sites). Mean periimplant loss was defined as the sum of the losses measured at the mesial and distal sides of each implant divided by two [19]. Average bone loss yielded by the given implant insertion protocol (i.e. all-on-four or all-on six) was calculated as the grand mean of mean losses (Figure 1). Only vertical bone loss was measured, and bone gain was considered a bone loss of zero. The measurements were done immediately after implant insertion (baseline) and at the follow-up with the WixWin Platinum software (Gendex, Hatfield, PA, USA). It is known that the process of measuring marginal bone level has a precision of 0.2 mm or more owing to variations in exposure geometry, exposure time and observer perception [24]. The results should be interpreted with this limitation in mind. 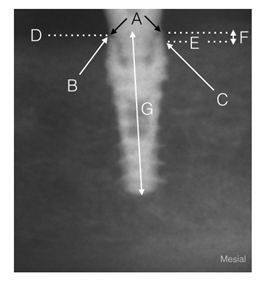 Statistical analyses were performed with SPSS 17.0 (SPSS, Inc., Chicago, USA). As the data were normally distributed (Shapiro-Wilk p<0.05), comparisons were done with ANOVA. The level of significance was set at p<0.05.  The results were analyzed both by technique (all-on-six or all-on-four) and by whether mandibular or maxillary restoration was done. In the case of inclined implants, bone losses on the mesial and distal sides were also compared across the applied techniques (4 subgroups). Comparisons with the non-inclined implants were performed too.  Given that these calculations involved a group with a low number of elements (inclined implants in the all-on-six group, 7 implants), for these comparisons the non-parametric Kruskal-Wallis ANOVA was used. For post-hoc pairwise comparisons we used the Mann-Whitney U test in these cases.

The most important finding of the study might be that the bone response to self-drilling titanium dental implants with a variable thread profile and a condensing cone core applied according to the all-on-four or all-on-six protocols is comparable to what is described in the literature in connection with cylindrical implants applied in the same way (Table 2). Successful osseointegration without any complications was achieved in all cases. As shown in Table 2, the range of bone loss measured in connection with cylindrical implants is 0.7-1.52 mm (at an average of 2.09 years post-implantation), while we found bone loss in the range 0.39-0.77 mm. This might indicate that variable thread profile implants are generally more favorable in terms of average bone loss, as some studies found [10,14], but given the relatively small number of implants examined our study, this is difficult to tell.  However, the results allow us to conclude that the profile of the implant in itself does not influence bone loss to a significant extent, which is in line with what the most studies found about tapered implants in various applications [9,12,13]. Therefore the use of variable thread profile implants for all-on-four and all-on-six restorations can be considered a safe alternative.

The finding that the bone response was more favorable when the all-on-six technique was used came as no real surprise. Obviously, the distribution of the load applied to the superstructure (i.e. the prosthesis) is more favorable when the superstructure is supported by six implants. This may also explain the apparent superiority of maxillary implants in terms of the favorability of the bone response. Maxillary rehabilitations are most often done with the all-or-six technique (rather than the all-on-four), and we also applied this technique only in the maxillae of our patients. Therefore we argue that the favorable response is to be put down to the technique, not some bone-related factor. It is to be noted that although the all-on-four technique yielded more bone loss, the loss was still within the range reported in connection with cylindrical implants (Table 2).

Naturally, like all studies, this one has its weaknesses.

One such weakness may be the relatively small sample size. Indeed, this is something which makes it impossible to draw ultimate conclusions from this study. Still, the fact that implant success was achieved in hundred percent of the inserted fifty-eight implants can be taken as an indicator of at least a strong tendency, and we believe that this is an important piece of information for the practicing implant dentist.

Methodologically, the use of panoramic radiographs may be of concern. While we know that there are methods that allow a more precise approximation of bone loss, it must be seen that for the purposes of this study, the use of this technique was not inappropriate. Our goal was to document successful osseointegration and to exclude the possibility of excessive bone loss. In other words, by using panoramic radiographs, we could safely determine at least the magnitude of bone loss and whether the bone loss associated with the use of variable thread profile implants is significantly different from what is observed with cylindrical implants in magnitude. That is, we superordinated the assessment of practical safety to the highest achievable precision. Furthermore, regardless of the existence of more precise methods, panoramic radiographs are still widely used to assess bone loss, as evidenced by several recent studies[20,24-27].

A further objection could be that the follow-up period was short. This is true, but again, this short period was appropriate for our purposes: we were interested in the success of osseointegration in the case of these implants and whether these implants integrate with more bone loss than the cylindrical ones. Implant survival in the long run was not within the scope of this study. Therefore, one and a half years were enough to answer these questions.

As a final conclusion, while further studies with larger samples are undoubtedly necessary, these results suggest that variable thread profile implants applied according to the all-on-four or the all-on-six technique are possibly just as safe to use in these protocols as cylindrical ones.

The authors declare no conflict of interest.

©2016Antal MA. This is an open-access article distributed under the terms of the Creative Commons Attribution License, which permits unrestricted use, distribution, and reproduction in any medium, provided the original author and source are credited.