We have previously reported the association between neuropeptide Y2 receptor (NPY2R) gene promoter SNPs and plasma HDL-cholesterol levels in healthy subjects. To clarify this mechanism, we constructed pGL3-Basic plasmid with NPY2R gene promoter with rs6857530GG+rs6857715TT (G+T) or rs6857530AA+ rs6857715CC (A+C), and measured luciferase activity in cultured HepG2 cells, macrophages, and adipocytes. Luciferase activities of (G+T) were detected in HepG2, and (A+C) detected in macrophage. On the other hand, luciferase activities of (G+T) and (A+C) did not differ from those of control pGL3-Basic plasmid without inserts. Mobility shift assay revealed one specific shift bands using HepG2 nuclear extracts and both oligonucleotide with SNP rs6857530A and G, while it revealed another specific shift band with SNP rs6857530G. Mobility shift assay revealed one specific shift band using macrophage nuclear extracts and oligonucleotide with SNP rs6857530G but not with SNP rs6857530A. From these results, SNP- and cell type-dependent expression of NPY2R may be a relevant factor to understand the mechanism underlying the association between NPY2R SNPs and plasma HDL-cholesterol levels.

Neuropeptide Y (NPY) is known as orexigenic peptide that stimulates appetite in the hypothalamus through NPY1 receptor (NPY1R) [1]. NPY plays pleiotropic roles not only through NPY1R but NPY2R and NPY5R in human [2]. NPY rather inhibits appetite through hypothalamic NPY2R in rodents and human [3,4]. However, the previous report has demonstrated stress-induced visceral obesity through NPY2R in the liver and adipose tissues including macrophages in mice [5]. Stress stimulates not only cortisol release from adrenal cortex but also catechol amines and NPY release from sympathetic nerve terminals. NPY also induces ischemic angiogenesis and plaque instability in human vascular tissues through NPY2R [6]. We have previously investigated the association between 5’-flanking region of NPY2R gene SNPs and metabolic traits in subjects coming to the city health center for health checkups [7]. Plasma high-density lipoprotein (HDL)-cholesterol levels were significantly different in subjects with each SNP types (rs6857530; GG<GA<AA or rs6857715; TT<TC<CC). However, the mechanism underlying the association between NPY2R gene variants and plasma HDL-cholesterol levels is still to be clarified. In the present study, we have constructed reporter plasmid of NPY2R gene SNPs rs6857530 or rs6857715 and examined the luciferase activity using these constructs transiently transfected in HepG2, macrophage, and adipocytes. To understand the mechanism of SNP-dependent luciferase activity, we also performed mobility shift assay using oligonucleotides containing SNP rs6857530 type and nuclear extracts of HepG2 and macrophages.

Sequence -662 to +13 from the transcription start site of NPY2R gene including SNP rs6857530GG and SNP rs6857715TT (G+T) or SNP rs6857530AA and SNP rs6857715CC (A+C) were amplified from blood cell DNA using primers (forward primer; 5’-GCAGACACCTGTTAGGGAAATTGCTG-3’, and reverse primer 5’-TCTCAGCCGCCTCCCGGGCTTGCAA-3’) (Figure 1a). DNA was extracted from whole blood cells in subjects with indicated SNP types using the phenol-chloroform method as described previously [8,9]. Our study was approved by the research ethical committee of the University of Hyogo [7]. PCR product and pT7 Blue-vector (Novagen) (Figure 1b) were ligated according to manufacturer’s protocol. After subcloning, this construct and pGL3-Basic/promoter vectors (Promega Corp., Madison, WI) (Figure 1-b) were digested with restriction enzymes Hind III and Kpn I (New England Biolabs, Ipswich, MA) and ligated according to manufacturer’s protocol. After cloning, we obtained pGL3-Basic plasmid with (G+T) or (A+C) and confirmed the DNA inserts of the plasmid by DNA sequencing using autosequencer (Applied Biosystems) (Figure 1c).

Figure 1. For the luciferase experiments, sequence -662 to +13 from the NPY2R gene transcription start site was amplified from blood cell DNA with each SNPs using primers (a). Luciferase promoter plasmid pGL3-Basic, pRL-SV40 for normalization of luciferase assay and pT7 Blue are illustrated (b). PCR products were TA cloned, and then reinserted into the pGL3-Basic plasmid. Correct orientation and SNP typing of DNA insert were confirmed by DNA sequencing (C).

All cells were seeded in 12-well plates. THP-1 cells were differentiated to macrophage 1 day after the addition of phorbol 12-myristate 13-acetate. 3T3-L1 cells were differentiated to adipocytes 2-3 weeks after the addition of initial cocktail. When HepG2 cells were sub-confluent, and macrophage and adipocytes continued to be stable at least one week after the differentiation, cells were co-transfected with 1 µg of indicated plasmids or control plasmids without inserts and 10 ng of the pRL-SV40 plasmid containing SV40 promoter linked to a constitutively expressing Renilla luciferase reporter gene (Promega) (illustrated in Figure 1b). Transfections were performed for 24 hours using FuGENE (Promega). The cells were harvested according to manufacturer’s instructions and luciferase activity was determined using the Dual-Luciferase Reporter Assay System (Promega) and a Turner design luminometer TD-20/20 (Promega, Tokyo, Japan) as described previously [11]. All data were normalized to Renilla luciferase activity. The experiments were done at least three times in quadruplicate. Statistical siginificance was assessed by analysis of variance using SPSS (IBM SPSS, v. 22.0).

SNP rs6857530G or rs6857530A. Unlabeled (competitor) or 5’-biotinylated oligonucleotide with rs6857530G (5’-GCTGATCATGGGCGGCAGGATCTGAACTCG-3’) or rs6857530A (5’-GCTGAT CATGGGCAGCAGGATCTGAACTCG-3’) was synthesized (GENEray Biotechnology). For competition assays, 0.8 to 8 pmole unlabeled oligonucleotides were added as competitors. Binding reaction was performed for 20 min. The complexes were separated on a 6% polyacrylamide gel in 0.5 x TBE. After electrophoresis, gel was electro-transferred at 380 mA for 30 min to nylon membrane. After cross linking by trans-illuminator, blotted membrane was washed, blocked and reacted with streptavidin-horseradish peroxidase solution. After reacting with luminol/enhancer solution, the membrane was exposed to ECL mini-camera (Amersham Pharmacia Biotech). 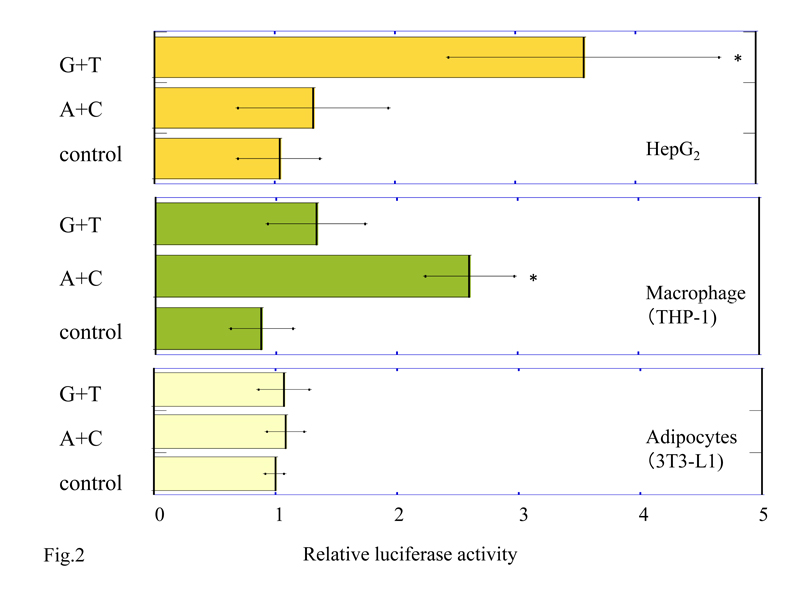 The sequence around rs6857715 did not include the consensus sequence possible to bind known transcription factors (DNASIS-Mac v3.2; Hitachi Tokyo, Japan). Thus, the mechanism underlying the association between NPY2R gene SNP rs6857715 and plasma HDL-cholesterol levels remains unclarified. However, the sequence around rs6857530 included the consensus sequence possible to bind Sp1. It was reported that Sp1 is a zinc finger transcription factor that binds to G-C rich motifs of many promoters and is involved in a variety of processes such as cell growth, apoptosis, differentiation and immune responses [18-20]. In the present study, mobility shift assay demonstrated similar complex of HepG2 nuclear extracts with oligonucleotide containing rs6857530G or rs6857530A and another complex with oligonucleotide containing rs6857530G (Figure 3a). On the other hand, mobility shift assay demonstrated single complex of nuclear extracts of macrophage with rs6857530G but not rs6857530A (Figure 3b). If a band shown by arrow A in Figure 3a and that by arrow in Figure 3b is assumed to include a repressor and a band shown by arrow B in Figure 3a include an activator, it may be consistent with SNP- and cell type-dependent transcriptional activity, although it needs another assumption that the activator is more dominantly effective than the repressor to activate transcription of NPY2R gene with SNP rs6857530G in HepG2. It is still to be clarified what kinds of transcription factors are relevant for determining SNP- and cell-dependent NPY2R gene transcriptional activity.

These results suggest that expression of NPY2R gene with (G+T) in hepatocytes and those with (A+C) in macrophages may determine, at least in part, plasma HDL-cholesterol levels. Recent drugs such as CETP inhibitor could raise plasma HDL-cholesterol levels without adverse hypertension but not reduce the risk of recurrent cardiovascular events [21]. Thus, it is still controversial whether simple reduction of plasma HDL-cholesterol is beneficial. Moreover, HDL has pleiotropic effects including immune functions [22]. Although further studies are required to understand the more precise underlying mechanism, NPY2R may be a useful therapeutic target for hypo HDL-cholesterolemia in subjects with specified NPY2R gene SNPs.

©2015 Okada M. This is an open-access article distributed under the terms of the Creative Commons Attribution License, which permits unrestricted use, distribution, and reproduction in any medium, provided the original author and source are credited.

Figure 1. For the luciferase experiments, sequence -662 to +13 from the NPY2R gene transcription start site was amplified from blood cell DNA with each SNPs using primers (a). Luciferase promoter plasmid pGL3-Basic, pRL-SV40 for normalization of luciferase assay and pT7 Blue are illustrated (b). PCR products were TA cloned, and then reinserted into the pGL3-Basic plasmid. Correct orientation and SNP typing of DNA insert were confirmed by DNA sequencing (C).