The primary torsion dystonias are a clinically and genetically heterogeneous group of movement disorders characterized by sustained or intermittent involuntary muscle contractions, causing abnormal segmental movements or incorrect postures or both. These symptoms have been associated with defects in mitochondrial oxidative phosphorylation. We have treated two female patients affected by sporadic, idiopathic, late-onset primary dystonia with high doses (100 mg twice a week) of intramuscular thiamine for 6-7 months. This therapy was effective in improving the motor problems, assessed with the Fahn-Marsden Rating Scale, of both patients. Considering that thiamine is a cofactor of mitochondrial enzymes involved in cell energy production, our results may support the hypothesis that some types of dystonia might have a mitochondrial pathogenetic defect.

The primary torsion dystonias (PTD) are a group of movement disorders characterized by sustained muscle contractions, frequently causing repetitive twisting movements or abnormal postures. In sporadic, idiopathic, late onset PTD, dystonia is the unique clinical sign, and there is not an identifiable exogenous, inherited, or degenerative cause [1].

The effect of the pathogenic changes in primary dystonia is not the neuronal death, but rather a dysfunction in the neural networks involving basal ganglia, sensorimotor cortex, and cerebellum. Neuroimaging studies showed structural and functional abnormalities in both focal and generalized PTD [2].

Defects in mitochondrial oxidative phosphorylation (OXPHOS) play a primary role in several neurodegenerative diseases. Dystonia is a neurological symptom that has definitely been associated with OXPHOS defects; some authors hypothesized that dystonia might have a mitochondrial etiology [3]. The classification of dystonias is based on three axes: by cause, by age at onset, by distribution. At present, only symptomatic treatment is possible for these diseases, since disease-modifying therapies effective on the pathogenic mechanisms of dystonia are not yet available [1].

Thiamine (vitamin B1) plays a key role in the maintenance of brain function. Thiamine-dependent processes are critical in glucose metabolism, and recent studies implicated thiamine in oxidative stress, protein processing, peroxisomal function, and gene expression. The classical syndromes caused by thiamine deficiency (TD) in humans are beriberi and Wernicke-Korsakoff syndrome [4-6].

The decreased activities of thiamine-dependent enzymes have also been reported in some neurodegenerative diseases independently on the nutritional state of the patients [6].

We previously formulated the hypothesis that, in some inherited or sporadic degenerative diseases of the central nervous system (particularly in Parkinson disease and in a subtype of genetically determined dystonia, DYT16), the pathogenesis of the symptoms could be linked to a focal thiamine deficiency due to dysfunctions of intracellular thiamine transport or to enzymatic abnormalities [7-9]. These dysfunctions may be responsive to high-dose thiamine [8, 9].

Therefore, we decided to treat with high-dose thiamine two patients affected by primary dystonia in order to verify the potential thiamine effect in the treatment of this disease.

The subjects provided a written informed consent to participate in the study.

The patients were affected by primary pure dystonia: the only clinical sign was a torsion dystonia and there was not identifiable any exogenous cause or other inherited or degenerative disease. The diagnosis of dystonia was based on clinical history, physical examination, and neurophysiological study [1]. We evaluated the dystonia according to the Fahn-Marsden Rating Scale, which is a validated scale composed by a Movement scale and a Dystonia Disability scale. The Movement scale is divided in a section evaluating provoking factors (scored 0-4) and a section evaluating severity factors (scored 0-4). Some items have a weight (W) of 1/2, while other items have a weight of 1. All these single scores are multiplied to give the adjusted score; all scores are summed to give an overall score (S), ranging from 0 to 120 [10].

The first patient was a 44-year-old woman, with a weight of 65 kg. She was healthy until January 2014, when she started to complain daily episodes of vertigo, lasting few minutes, associated with disequilibrium. In July 2014, she started to have gait difficulties due to a non-rhythmic tremor at the right lower limb. Successively, in August 2014, she noticed some tonico-clonic jerks at the four limbs, not associated with consciousness alteration. In September, she had stuttered and involuntary movements of the right lower limb and oscillatory movements of trunk during stance and gait.

Subsequently, the patient presented torticollis with head rotation to right. During those months, she was visited as inpatient in two relevant Italian hospitals: the neurological examinations were normal, except for the dystonic movements. Cardiologic, psychiatric, ophthalmologic, and oto-rhino-laryngological examinations were normal. Routine biochemical and hematological investigations were normal. Plasma thiamine level was 57 mg/l (normal values, 28-85). Folic acid, B12 and E vitamins were normal. Serology for syphilis was negative. Blood tests for circulating tumor markers, autoantibodies associated with autoimmune disorders, and antineuronal antibodies were negative. Echocardiogram, electromyography, electroencephalogram, and motor, somatosensitive, and brain-stem auditory evoked potentials were normal. Brain magnetic resonance scan and positron emission tomography with 18-FDG were normal. The genetic test for glut1 was negative. The diagnosis was generalized idiopathic primary dystonia. The patient was treated with amantadine and duloxetine without benefit. (See videos: Patient 1 before, parts A and B)

The second patient was a 50-year-old woman, with a weight of 70 kg. At the end of 2013, she started to complain contractions and muscular spasms at the right side of the face as well as some contractions of the right orbicular oculi muscle (See Figure: Patient 2 Before). These symptoms had a progressive impairment, leading to persistent contraction of the mouth muscles and to stable right deviation of the mouth. The contraction of the right orbicular oculi muscle was moderate, but frequently it became more severe and extended to the left orbicular oculi muscle, causing tight closure of both eyes and a functional blindness. Furthermore, a severe contraction of right sternocleidomastoid muscle led to a forced head rotation to the left side lasting even several days. Dysphonia and speech difficulty were associated (See video: Patient 2 before). The patient was evaluated by several specialists in University Hospitals. Common biochemical and hematological investigations were normal. Plasma thiamine level was 52 mg/l (normal values, 28-85). Brain magnetic resonance scan with angiographic sequences was normal. The diagnosis was idiopathic cranio-cervical dystonia. The patient was treated with antidepressant drugs without relief. The treatment with botulinum toxin was suggested but not performed. 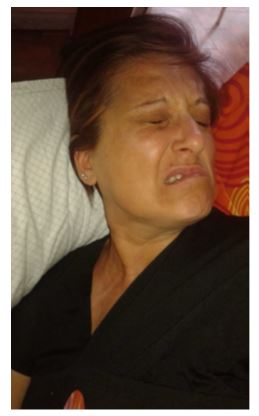 Both the patients began an intramuscular therapy with 100 mg of thiamine twice a week, right after the evaluation of the symptoms and the history of the disease.

The patient #1 started the treatment in August 2015, the patient #2 in September 2015. Both patients were re-evaluated with neurological examination and Fahn-Mardsen scale after 30 days of treatment.

We re-assessed the patients with the same tests about every 30 days after the beginning of the therapy. The patient #1, few hours after the first thiamine administration, noticed a quite complete regression of the dystonic symptoms. The symptoms slowly reappeared two days after, in the morning, 48 hours after the thiamine administration. For this reason, we decided to treat the patient with i.m. thiamine 100 mg every other day (See videos: Patient 1 after, Parts A-D).

The patient #2 noticed an improvement at the third injection, without loss of the effect in the interval between the administrations. Thirty days after the beginning of the treatment, she had a quite complete regression of the symptoms (See video: Patient 2 after).

The neurological examinations and the scores at the Fahn-Mardsen scale for both patients remained stable in the following months. The follow-up duration was 7 months for patient #1 and 6 months for patient #2. The scores at the Fahn-Mardsen scale of the two patients before and during thiamine treatment are displayed in Table 1.

Table 1. The scores at the Fahn-Mardsen scale of the two patients before and during thiamine treatment

Our two patients with dystonia had positive response to thiamine: intramuscular administration of high doses of thiamine was effective in reversing the motor disturbances. The clinical improvement of our dystonic patients may suggest that any abnormality in thiamine-dependent processes could be overcome by a diffusion transport at elevated thiamine concentrations. The presence of neurological symptoms, possibly due to a neuronal thiamine deficiency in patients with normal concentrations of plasma thiamine, could be explained by a dysfunction of intracellular thiamine transport or to enzymatic abnormalities.

Thiamine deficiency responsive to thiamine has been reported in genetic disorders of thiamine metabolism as well as in other inborn errors of metabolism that lead to neurological diseases [11-15]. Recently, some authors described interesting results with the same treatment in sporadic degenerative diseases, such as Parkinson’s disease [8]. The exact mechanism of thiamine responsiveness in these patients is unknown.

This clinical observation leads to suppose that the dystonic symptoms could derive from a focal thiamine deficiency that determines a selective neuronal dysfunction. In other words, thiamine deficiency could have an important role in the pathogenesis of the disease symptoms. The administration of large amounts of i.m. thiamine increases the intracellular passive transport of the thiamine; we may suppose that symptoms decrease when the energetic metabolism and other thiamine-dependent processes return to physiologic levels. Our aim was not to correct a systemic deficit of thiamine, but rather to increase the activity of enzymes involved in cell production energy in selective brain regions; moreover, there is emerging evidence that thiamine has relevant non-coenzymatic roles [5].

Our patients reported a general improvement of the voluntary motility. They continue the same therapy and maintain the same motor conditions, without any side effect. We suggest that thiamine therapy may play an important role in limiting the progression of the disease and a lifelong use of high-dose thiamine may be necessary in affected subjects. In fact, it has been described that etiologically-diverse dystonias could be responsive to high doses of thiamine [16].

In literature, there is no mention of thiamine-related adverse effects even at high doses and for very long periods of administration [8,17]. In conclusion, we believe that this report represents an important contribution to the issue of dystonia treatment; nonetheless, further experience is necessary to exclude a placebo effect and to confirm our present observation.

The authors declare that they have no financial and non-financial conflict of interest or competing interests.

© 2016 Costantini A. This is an open-access article distributed under the terms of the Creative Commons Attribution License, which permits unrestricted use, distribution, and reproduction in any medium, provided the original author and source are credited.

Table 1. The scores at the Fahn-Mardsen scale of the two patients before and during thiamine treatment