Neonatal respiratory distress syndrome (NRDS) is caused by the lack of pulmonary surfactant and immature pulmonary structure due to immature alveolar function. It is common in premature infants with gestational age less than 35 weeks. It can also occur in new-borns of diabetic mothers and caesarean babies. Of course, SP-A gene mutation and SP-B gene defect will cause pulmonary surfactant to fail to play its due role in perinatal asphyxia and neonates with severe Rh haemolytic disease. The main clinical manifestations were progressive dyspnoea, cyanosis and respiratory failure within a few hours after birth [1]. At present, the treatment of NRDS is becoming more and more mature, and the survival rate of premature infants at low gestational age is also increasing. However, some complications, such as bronchopulmonary dysplasia, have not been further controlled. Therefore, the early diagnosis and follow-up of NRDS have a significant impact on children's long-term quality of life.

Ultrasound has become the preferred diagnostic tool for many clinical diseases because of its non-invasive, immediate, convenient, fast and non-radiation advantages. However, because the alveoli are full of air, ultrasound can completely reflect when it meets the air, so lung ultrasound has not been a routine auxiliary examination of the chest, and the diagnosis of lung diseases has long relied on chest X-ray examination. With the increasing demand of critical care medicine and the popularity of bedside ultrasound, the study of lung ultrasound has been paid more and more attention. Existing studies have found that ultrasound has high sensitivity and specificity in the diagnosis of pulmonary diseases, and has been used in the diagnosis of a variety of pulmonary diseases in adults and children [4-11].

At present, lung ultrasound has been applied in the field of emergency and critical medicine for adults and children. In 2012, experts of the International Federation of Lung Ultrasound have reached an international consensus that lung ultrasound can accurately diagnose community-acquired pneumonia, acute respiratory distress syndrome, atelectasis, pulmonary oedema and pneumothorax, and even some pulmonary diseases. The diagnostic accuracy and sensitivity of lung ultrasonography are higher than those of chest X-ray [7-10,12-14]. And lung ultrasound is more suitable for application in intensive care units and neonatal care units because of its unique advantages [15-17]. In this study, bedside lung ultrasound was used to evaluate the characteristics of lung ultrasonography in infants with NRDS, and to dynamically monitor the measurements before and after mechanical ventilation in infants with NRDS, so as to provide clinical guidance for the clinical diagnosis and evaluation of curative effect of RDS.

10 neonates who were clinically diagnosed with neonatal respiratory distress syndrome by blood gas analysis and chest X-ray examination and treated with mechanical ventilation from July 2018 to January 2019 in our hospital were selected as the observation group, including 5 males and 5 females, with gestational age (27+6) weeks to (32+2) weeks, and birth weight ranging from 0.9 kg to 1.7 kg. Ultrasonic examination was performed by using Mindray M7 Expert ultrasonic diagnostic instrument. Linear array probes were selected, and the frequency was set at 10 ~ 11MHz. In a quiet state, neonates were placed in supine, lateral, and prone positions. Each lung was divided into anterior, lateral, and posterior regions with the anterior axillary line and posterior axillary line. The two nipples were connected as boundaries, and each lung was divided into two upper and lower lung fields, so that the two lungs were divided into 12 regions. The probe shall conduct transverse and longitudinal scanning of the lung starting from the second intercostal area. During longitudinal scanning, the probe should be perpendicular to the ribs. During transverse scanning, the probe should conduct intercostal scanning one by one along the intercostal space [18,19]. The observation indexes include pleural line, A-line, B-line, pulmonary interstitial syndrome, white lung, pulmonary consolidation, double lung point. Lung ultrasound score: 0: Mainly A line, less than two isolated B line, pulmonary sliding sign can be seen. One point: Multiple B lines with clear boundaries, regular or irregular distribution and spacing greater than 7 mm; Two points: Dense B line with diffuse distribution and spacing less than 3mm, with or without waterfall sign; Three points: Lung consolidation [20,21]. SPSS 16.0 software was used for data analysis. 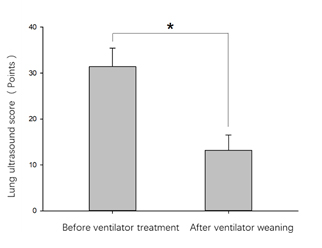 Figure 1. Comparison of lung ultrasound scores before and after ventilator treatment in NRDS neonates

Figure 2. Lung ultrasound imaging findings before and after ventilator treatment in NRDS children (A and B: Lung ultrasonographic manifestations of NRDS patients with combined b-line, dense b-line and white lung before ventilator assisted ventilation; C: After ventilator assisted ventilation, the symptoms and signs of NRDS children were improved. After removal of the machine, the lung ultrasound showed clear A line, and occasionally isolated B line. D: Two cases failed to withdraw aircraft for the first time, lung ultrasonographic manifestations deteriorated).

Of course, two of the cases in this study failed at the first disconnection. The imaging findings of lung ultrasound during mechanical ventilation were improved, and the clinical symptoms and signs were improved, suggesting that we could try to withdraw the machine. Unfortunately, respiratory distress reappeared within 12 hours of departure, with worsening sonographic findings of the lungs. This raises the question: Can pulmonary ultrasound predict the success rate of withdrawal? The answer is obviously uncertain. The results of this study showed that the lung ultrasound manifestations and ultrasound scores were synchronized with the symptoms and signs, but there was no evidence to suggest the success rate of withdrawal, which might be related to the complications of NRDS and whether there was oxygen dependence. However, the ultrasonic characteristics of NRDS complications, such as bronchopulmonary dysplasia, have not been unified, which is also a subject that needs further study in the future [24-26].

©2019 Chun Z. This is an open-access article distributed under the terms of the Creative Commons Attribution License, which permits unrestricted use, distribution, and reproduction in any medium, provided the original author and source are credited.

Figure 1. Comparison of lung ultrasound scores before and after ventilator treatment in NRDS neonates

Figure 2. Lung ultrasound imaging findings before and after ventilator treatment in NRDS children (A and B: Lung ultrasonographic manifestations of NRDS patients with combined b-line, dense b-line and white lung before ventilator assisted ventilation; C: After ventilator assisted ventilation, the symptoms and signs of NRDS children were improved. After removal of the machine, the lung ultrasound showed clear A line, and occasionally isolated B line. D: Two cases failed to withdraw aircraft for the first time, lung ultrasonographic manifestations deteriorated).