The β-cell membrane potential was recorded from micro dissected islets of Langerhans obtained from Swiss albino mice, killed by cervical dislocation, as previously described [10]. Once isolated, the islets were fixed with micro pins to the bottom of a 50 µl chamber and perfused at a flow rate of 1.0 ml/min with a modified Krebs-Ringer bicarbonate buffer containing (in mM) 120 NaCl, 5 KCl, 25 NaHCO3, 1.1 MgCl2 and 2.5 CaCl2. This medium was continuously bubbled with a mixture of O2 (95%) and CO2 (5%) to reach a 7.4 final pH. Chamber temperature was maintained at 36 ± 1°C. Sharp electrodes (approximately 100 M input resistance) were pulled in a Narishige PE2 vertical puller and filled with 3 M potassium citrate and 50 mM KCl. Recordings were made with an Ax probe amplifier (Axon Instruments), data acquisition (at a rate of 1.0 KHz), analysis and plotting being performed with Clamp fit version 10.4 (Molecular Devices) and Micro Cal Origin version 9.2 (Micro Cal Soft, Northampton, MA, USA). Sucralose and lactisole were purchased from Sigma (St. Louis, MO, USA) and Santa Cruz Biotechnology (Heidelberg, Germany).

Figure 1, Illustrates the typical bioelectrical response of an islet B-cell to increasing concentrations of D-glucose (3, 10, 15 and 25 mM), i.e. oscillations of the membrane potential with associated calcium action potential on the top of the depolarization waves. In other words, at low glucose concentration the plasma membrane remains hyperpolarized as the result of the K-ATP activation whilst, at higher hexose concentrations, the blockade of K-ATP leads to depolarization of the plasma membrane with resulting gating of voltage-dependent calcium channels.

Figure 1. Representative intracellular recording of a pancreatic β-cell first exposed to a rise in extracellular D-glucose concentration from 3 to 10 mM, and later exposed to 15 mM and then 25 mM D-glucose.

Figure 2 and 3 refer to experiments in which the cells were exposed to 10 mM D-glucose first in the absence and later in the presence of 5 mM lactisole. In both experiments, a transient decrease in electrical activity in response to lactisole administration was first observed. In Fig. 2, lactisole first provoked for 1-2 minutes a decrease in burst duration and, thereafter, prolonged burst duration. The removal of lactisole seemed to reverse the latter effect. Likewise, in Figure 3, lactisole first transiently decreased the burst duration and, later, obviously prolonged burst duration. Upon removal of lactisole, the electrical activity of the cell returned to its initial pattern. The concerned B-cell was adequately functional, as documented by the hyperpolarization caused by the removal of glucose from the perfusate. Fig. 4 illustrates that, when lactisole was administered at a higher 10 mM concentration to cells exposed to 10 mM D-glucose; no transient inhibitory effect of lactisole was anymore observed, the latter agent now provoking an obvious and immediate increase in burst duration eventually leading to continuous firing. 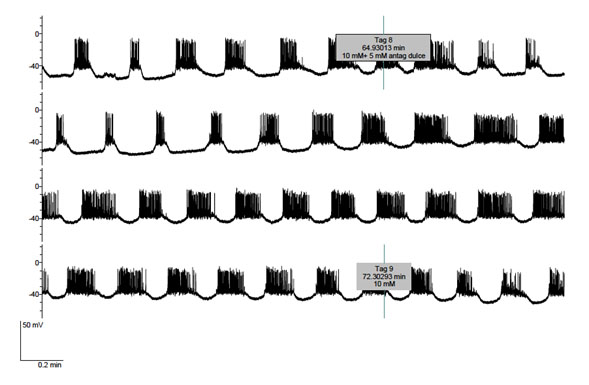 Figure 2. Effect of lactisole (5 mM) administered from tag 8 to tag 9 upon the electrical activity of a B-cell exposed throughout the experiment to 10 mM D-glucose. 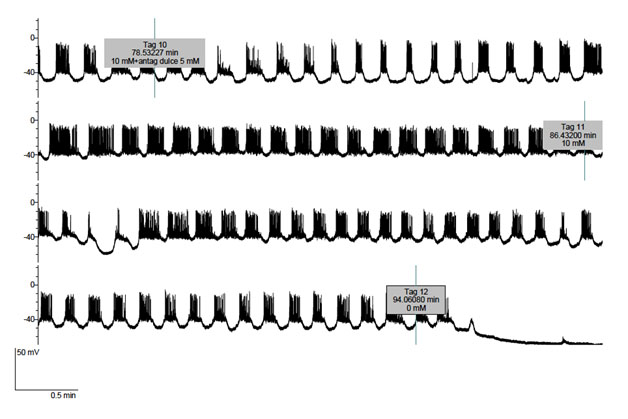 Figure 3. Effect of lactisole (5 mM) administered from tag 10 to tag 11 upon the electrical activity of a B-cell exposed up to tag 12 to 10 mM glucose and, thereafter, deprived of exogenous D-glucose. 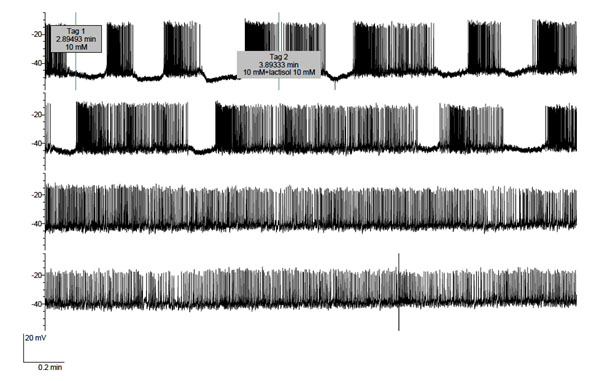 Figure 4. Effect of lactisole (10 mM) administered from tag 2 onwards upon the electrical activity of a B-cell exposed throughout the experiment to 10 mM D-glucose.

Lastly, Figure 5 concerns the effect of lactisole used at an even higher 20 mM concentration upon a cell exposed to 10 mM D-glucose first in the absence and then in the presence of 20 mM sucralose. As expected, a major effect of sucralose was to increase the electrical bursting activity. The data listed in Table 1, which were restricted, as far as the control values recorded in the sole presence of D-glucose is concerned, to the onset of the experiment in order to avoid any interference in terms of the time course for the reversibility of sucralose action, document the statistical significance of the changes caused by sucralose in the duration of both each active phase and each complete oscillations (comprising active and silent phases), the number of action potentials in each burst, and the frequency of action potentials along either the active phases or complete periods. Only the percentage of time occupied by the active phases relative to the total period duration failed to differ significantly in the absence or presence of sucralose. In this experiment the administration of 20 mM lactisole to the cell exposed to both 10mM D-glucose and 20 mM sucralose again only resulted in an excitatory effect, lactisole inducing further depolarization and burst cancellation, so that the cell now went into continuous firing. Such an excitatory effect of lactisole was rapidly reversed upon removal of lactisole from the perfusate. Likewise, the effect of sucralose upon burst duration was rapidly reversed upon removal of sucralose from the perfusate (Figure. 5).

Table 1. Effects of sucralose in the presence of D-glucose. 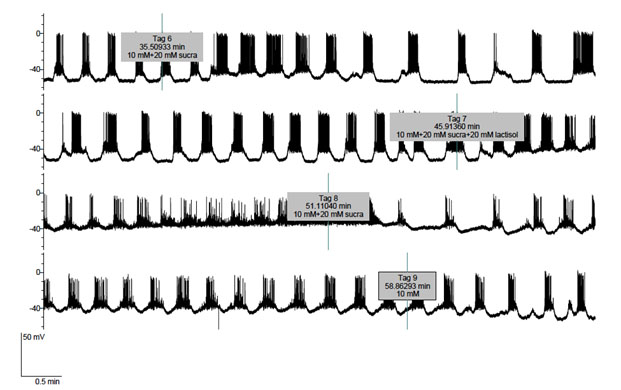 First performed by Dean and Matthews (1968) [11], intracellular recording of pancreatic islet cells electrical activity was then extensively used in several laboratories. It later felt in use, however, because of the difficulty of intracellular penetration. Nevertheless, this technique offers several advantages. Intracellular recording is made with sharp, long taped and high impact resistant electrodes, which allows a minimal invasive intervention, since intracellular dialysis does not happen contrarily to the case when using patch electrodes. The long-taped electrodes provide flexibility that permits long lasting records, usually in the 30-120 minutes range. The records are made in micro dissected islets, not requiring any enzymatic digestion, the pattern of electrical activity having been validated in vivo [12].

The present experiments first illustrate the expected graded electrical response of pancreatic islet B-cells to increasing concentrations of glucose (Figure.1). They further document that sucralose (20 mM) increases the duration of electrical bursts in B-cells exposed to 10 mM glucose (Figure. 5). Last, they reveal that lactisole exerts, to say the least, a dual effect upon electrical activity in the islet B-cells. In the presence of 10 mM glucose, lactisole (5 mM) first decreased transiently and later increased in a sustained manner the duration of electrical burst (Figure 2 and 3). At a higher concentration (10 mM) of lactisole, no inhibitory effect was anymore observed, lactisole now exerting a quite obvious excitatory effect, eventually driving the cell in continuous firing for a quite prolonged period (Figure. 4). Likewise, at an even higher concentration (20 mM), lactisole rapidly cancelled the bursting pattern and provoked continuous firing in cells exposed to both 10 mM glucose and 10 mM sucralose (Figure. 5).

The present results thus draw attention to a dual and time-related effect of lactisole upon B-cell electrical activity. The response to lactisole administration appears modulated by its concentration (5, 10 or 20 mM) and the absence or presence of sucralose in association with glucose in the perfusate. The effect of lactisole is rapidly reversible (Figure. 5). Although these findings may call for more extensive investigations, they nevertheless appear compatible with the view that (i) lactisole effects are duly attributable to its binding to TIR3 receptor, (ii) the early and transient inhibitory action of lactisole upon the duration of electrical bursts could involve an increase in calcium-responsive K+ conductance resulting from a release of Ca2+ from intracellular sites [4], and (iii) exposure of pancreatic islet B-cells to lactisole may also result in an excitatory effect upon the electrical activity of these cells.

©2018 Malaisse JW. This is an open-access article distributed under the terms of the Creative Commons Attribution License, which permits unrestricted use, distribution, and reproduction in any medium, provided the original author and source are credited.

Table 1. Effects of sucralose in the presence of D-glucose.

Figure 1. Representative intracellular recording of a pancreatic β-cell first exposed to a rise in extracellular D-glucose concentration from 3 to 10 mM, and later exposed to 15 mM and then 25 mM D-glucose.

Figure 2. Effect of lactisole (5 mM) administered from tag 8 to tag 9 upon the electrical activity of a B-cell exposed throughout the experiment to 10 mM D-glucose.

Figure 3. Effect of lactisole (5 mM) administered from tag 10 to tag 11 upon the electrical activity of a B-cell exposed up to tag 12 to 10 mM glucose and, thereafter, deprived of exogenous D-glucose.

Figure 4. Effect of lactisole (10 mM) administered from tag 2 onwards upon the electrical activity of a B-cell exposed throughout the experiment to 10 mM D-glucose.