Background: Few studies have focused on the “glucose-normalizing effects” of high and standard doses of dipeptidyl peptidase‐4 (DPP-4) inhibitors evaluated using continuous glucose monitoring (CGM). Teneligliptin is a DPP-4 inhibitor licensed in Japan for administration at standard (20 mg/day) and high (40 mg/day) doses to treat type 2 diabetes mellitus. However, little is known about its effects on the “quality” of glucose control or plasma glucose fluctuation, including factors such as postprandial glucose levels and frequency of hypoglycemia. We used CGM to study the efficacy of high-dose teneligliptin for the treatment of diabetic patients.

Incretins, including glucagon-like peptide-1 (GLP-1) and glucose-dependent insulinotropic polypeptide (GIP), exert antidiabetic activities by stimulating insulin secretion and inhibiting postprandial glucagon secretion in a manner dependent on plasma glucose levels [1]. Dipeptidyl peptidase‐4 (DPP-4) inactivates incretins by hydrolysis; thus, DPP-4 inhibitors stimulate insulin secretion and inhibit glucagon secretion leading to reduced glucose levels without hypoglycemia [2]. In addition, DPP-4 inhibitors have been reported to prevent hypoglycemia by enhancing glucagon secretion during the hypoglycemic period [3]. Teneligliptin has been reported to be a potent, long-lasting DPP-4 inhibitor [4] and is licensed in Japan for administration at standard (20 mg/day) and high (40 mg/day) doses for glycemic control [5]. However, little is known about effects of high-dose teneligliptin on plasma glucose fluctuation, including the frequency of postprandial glucose increase and hypoglycemia. In this study, we used continuous glucose monitoring (CGM) to assess whether high-dose teneligliptin is superior to the standard dose in terms of the “quality” of glucose control.

We recruited ten individuals with type 2 diabetes mellitus (21–81 years) hospitalized at Fukuoka University Chikushi Hospital from April 2014 to June 2016. We have exclusion criteria of this study. Patients who are or might have been pregnant, those with severe liver dysfunction (including liver cirrhosis), and those who have or had any malignancy were excluded, and all participants provided written informed consent to inclusion in this study, which was approved by the Ethics Review Committee of Fukuoka University Chikushi Hospital (Japan). Participant characteristics are shown in Table 1.

The Medtronic iPro™ 2 CGM system (Medtronic, Northridge, CA, USA) was used for continuous glucose monitoring with Medtronic Enlite™ glucose sensors (Medtronic) placed on the abdomen according to the manufacturer’s instructions. Patients were fitted with the CGM device (Day 0) and were started on the standard dose (20 mg/day) of teneligliptin for 2 days (Days 1 and 2) followed by high-dose (40 mg/day) teneligliptin for an additional 2 days (Days 3 and 4) continuously. We used CGM data obtained on Days 2 and 4 for determining the mean, maximum, minimum, and standard deviation (SD) of glucose levels, and the mean amplitude of glycemic excursion (MAGE), which was calculated as the mean difference between consecutive blood glucose peaks and nadirs measured continuously by CGM, provided that the differences were greater than one SD of the mean glucose value as described previously [6]. During this period, diet, exercise or drugs were not changed. 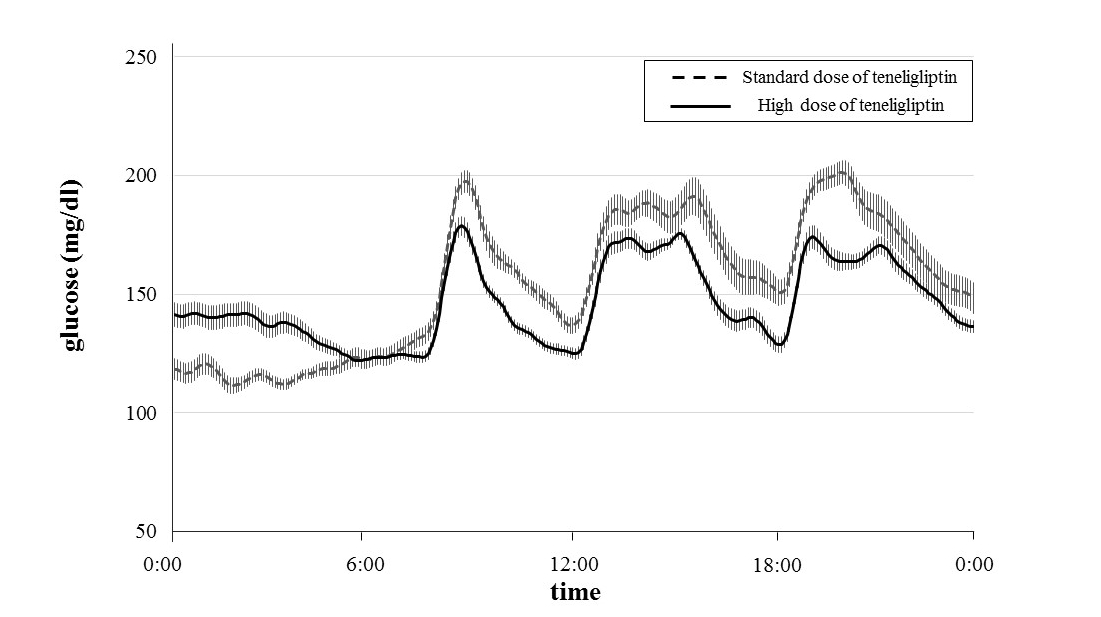 Figure 1. Changes in glucose level over 24 hours treated with standard dose and high dose of teneligliptin measured by CGM. Data are the mean ± standard error of the mean (SEM).

Data are expressed as mean ± standard deviation (SD). The significance of differences between means was estimated by paired Student’s t-test. Values of P < 0.05 were considered to indicate statistical significance (*).

With the increasing prevalence of type 2 diabetes worldwide [7] comes an increase in the importance of preventing its complications [8]. Glucose homeostasis is controlled by both insulin resistance and the secretion of insulin and glucagon [9]. Persistent hyperglycemia leads to diabetic microangiopathies, such as neuropathy, nephropathy, and retinopathy. Furthermore, studies such as the DECODE (Diabetes Epidemiology: Collaborative Analysis of Diagnostic Criteria in Europe) study showed that postprandial hyperglycemia correlates with the occurrence of macroangiopathy [10]. The ACCORD (Action to Control Cardiovascular Risk in Diabetes) and ADVANCE (Action in Diabetes and Vascular Disease: Preterax and Diamicron MR Controlled Evaluation) studies showed that severe hypoglycemia is a risk factor for microangiopathy, cardiovascular disease, and mortality [11,12]. It is also reported that large glucose fluctuations cause oxidative stress, thereby leading to endothelial cell injury [13]. DPP-4 inhibitors are known to decrease hyperglycemia by stimulating insulin secretion and inhibiting glucagon secretion, owing to an increase in GLP-1 [14]. And it has been reported that DPP-4 inhibitors raise glucagon levels in the hypoglycemic state owing to an increase in GIP; thus, providing the capacity to prevent hypoglycemia [15]. DPP-4 inhibitors have also been reported to reduce MAGEs [16]. For these reasons, DPP-4 inhibitors are expected to prevent diabetic complications. Teneligliptin is a DPP-4 inhibitor that has been shown to significantly improve 24-h blood glucose control in Japanese patients with type 2 diabetes [17]. In Japan, teneligliptin is licensed for administration at standard (20 mg/day) and high (40 mg/day) doses; however, a previous study showed that there was no statistically significant difference in the effects on HbA1c levels mediated by the standard dose (−0.9% vs. placebo) and the high dose of teneligliptin (−1.0% vs. placebo) [18]. In contrast to this, our results using CGM revealed a dose-dependent improvement in the effects of teneligliptin on MAGE, SD, and maximum of glucose levels. In addition, high-dose teneligliptin raised the minimum glucose levels significantly compared with the effects of the standard dose. These data indicate that high-dose teneligliptin may prevent a hypoglycemic event, not only reducing the risk of diabetic complications but also improving the safety and quality of life (QOL) of patients with type 2 diabetes.

In conclusion, we recommend that high-dose teneligliptin should be a potent treatment alternative for patients with type 2 diabetes to attain good “quality” of glucose control and reduce the risk of diabetic complications. It should be noted that the limitations of our study include the small number of cases and the short duration of the period of investigation. Thus, further randomized control studies including larger numbers of cases, with longer-term monitoring are required to confirm the beneficial effects of high-dose teneligliptin and other DPP-4 inhibitors in patients with type 2 diabetes.

The authors declare that there is no conflict of interests regarding the publication of this paper.

© 2017 Abe I. This is an open-access article distributed under the terms of the Creative Commons Attribution License, which permits unrestricted use, distribution, and reproduction in any medium, provided the original author and source are credited.

Figure 1. Changes in glucose level over 24 hours treated with standard dose and high dose of teneligliptin measured by CGM. Data are the mean ± standard error of the mean (SEM).

Data are expressed as mean ± standard deviation (SD). The significance of differences between means was estimated by paired Student’s t-test. Values of P < 0.05 were considered to indicate statistical significance (*).