Summary: Contrast angiography via the catheter confirmed subclavian artery cannulation just distal to the takeoff of the vertebral and internal mammary arteries. Involvement of the subclavian artery necessitates surgical or endovascular repair given lack of accessibility precluding direct compression. Deployment of a percutaneous suture-based closure device allowed for removal of the 12Fr catheter with hemostatic repair of the arteriotomy.

Inadvertent arterial cannulation during attempted central venous catheterization (CVC) is a potentially lethal complication. Although various treatment modalities exist, there are no guidelines available to assist clinical management. Anatomic localization of the site of injury plays a pivotal role in determining optimal intervention. In this report, we describe the diagnosis and management of an inadvertent subclavian arteriotomy during right internal jugular CVC using an endovascular approach and deployment of a suture-based closure device.

Central venous access is a commonly performed procedure that can lead to infectious, thrombotic, or mechanical complications [1]. Although the incidence of mechanical complications has decreased since the advent of ultrasound-guided access, the potential for arterial cannulation still exists [2]. Inadvertent arterial catheterization necessitates clinical efforts directed at removal of the catheter. Achieving hemostasis at the site of arterial access is critical to avoiding life-threatening hemorrhage. Management strategies include direct compression, surgical exploration with direct repair, or endovascular interventions [3,4]. Specific endovascular treatment techniques include placement of a covered stent or deployment of a percutaneous closure using a collagen-based or suture-based closure device [5]. Optimal therapeutic intervention is determined based on the anatomical location of the arterial access site. Several case reports have shown success with endovascular management of arterial cannulation even with large-bore catheter insertion [3,4]. Although there is growing literature to support an initial endovascular approach, there are no studies comparing endovascular to surgical intervention. We report a case of inadvertent subclavian artery cannulation with a 12F catheter during attempted ultrasound-guided CVC that was managed endovascularly. Deployment of a percutaneous suture-based closure device allowed for removal of the 12Fr catheter with hemostatic repair of the arteriotomy. The patient agreed to publication of details and images related to their care within this manuscript.

We present a 76-year-old female with a history of insulin dependent diabetes mellitus, chronic kidney disease stage 3, and recent total hip arthroplasty presented to our institution with lethargy and generalized weakness. Workup revealed Clostridium difficile colitis and acute kidney injury, which was managed with antibiotic therapy and fluid resuscitation. The patient clinically improved and was discharged to inpatient rehabilitation, where continued monitoring revealed progressive decline of her kidney function culminating in volume overload refractory to medical therapy and multiple thoracentesis procedures. General surgery was consulted for non-tunneled hemodialysis catheter placement for initiation of renal replacement therapy per nephrology recommendations. 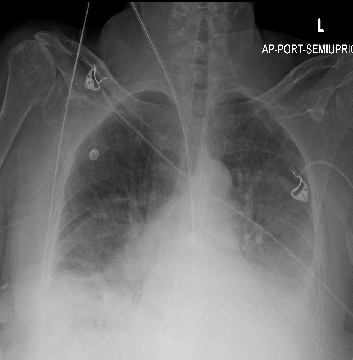 The patient remained hemodynamically within normal limits. At that time, we recommended proceeding with angiography with possible endovascular intervention and removal as feasible. This was discussed with the patient and family, and then the patient was taken to the operating room and placed under general anesthesia with endotracheal intubation. Contrast arteriography was performed via the catheter (Figure 2), and demonstrated cannulation of the right subclavian artery with the catheter entering the artery just distal to the origin of the right vertebral artery. 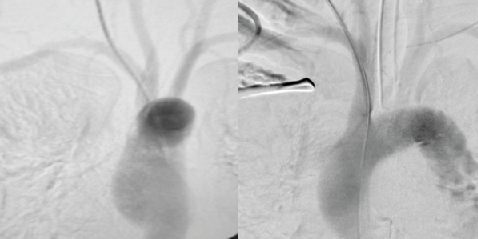 Proximity to the vertebral and internal mammary arteries hindered covered stent placement, and deployment of a suture-based closure device was identified as the optimal intervention for closure of the arteriotomy.

A Glidewire was advanced through the hemodialysis catheter and the catheter was exchanged with a 7 French dilator sheath. Another arteriogram was performed with no extravasation visualized after the catheter was downsized. The dilator sheath was then removed and a Perclose device advanced over the guidewire, positioned under fluoroscopic guidance, and deployed. Hemostasis at the internal jugular was achieved with manual compression and the skin at the percutaneous access site was closed with interrupted subcuticular sutures. A hemodialysis catheter was placed via femoral access. The patient remained intubated post-procedure for airway protection and was extubated the following day. Her postoperative course was unremarkable, and the patient was ultimately discharged to home 18 days later.

Inadvertent arterial cannulation, although infrequent, can lead to devastating complications including death from hemorrhagic shock. The incidence of arterial puncture during attempted internal jugular and subclavian cannulation has been estimated to be 1% and 2.7% respectively [6]. Ultrasound has reduced, but not eliminated, the risk of mechanical complications from CVC. In one multicenter retrospective study, 3.1% of bedside central venous access procedures resulted in a complication requiring intervention or a complication leading to permanent damage [7].

Risk factors for inadvertent arterial cannulation include anatomic variability, operator experience, vessel patency, and obesity. The location of the access site for CVC is predictive of injury patterns with respect to inadvertent arteriotomies. Subclavian artery cannulation with internal jugular access typically results in medially located injuries in close proximity to the origin of the vertebral artery, whereas subclavian access leads to injury to the artery laterally [8].

Endovascular therapies continue to evolve, leading to increased potential for application of effective, minimally invasive interventions in vascular surgery. Despite evidence supporting the use of endovascular management of arterial injuries resulting from attempted CVC, no current guidelines exist to guide clinical management. Involvement of the subclavian artery necessitates surgical or endovascular repair given lack of accessibility precluding direct compression. In one retrospective analysis, 47% of patients treated by removing the catheter with external compression experienced major complications such as arteriovenous fistula formation, hematoma, pseudoaneurysm formation, airway obstruction and stroke [9]. Anatomical factors as well as patient comorbidities limit the feasibility of open surgical managements. Patients requiring central venous catheterization are often critically ill, making open surgical repair a daunting management option. Arteriotomies within the thoracic cavity often may only be exposed through sternotomy or thoracotomy incisions, significantly increasing morbidity. As a result, the increased utilization of minimally invasive techniques as a first-line intervention should be priorized.

Endovascular management options include collagen-based closure devices, suture-based closure devices and stent-graft. Collagen-based devices are intended to occlude 8 French or smaller incision sites. Larger sheaths typically require a suture-based device for closure such as a Perclose device [10]. Certain injuries, when located in close proximity to the takeoff of another artery, may make stent-graft deployment impractical. Dornbos et al recently published a systematic review analyzing the management of inadvertent arterial placement caused by central venous catheters. In their review, 78% of arteriotomies to the subclavian artery were treated with endovascular techniques, 2.6% failed requiring open surgical treatment. Percutaneous closure devices were used in 50 cases and were the most frequently used method of repair. Only two complications were reported with percutaneous closure devices, both pseudoaneurysms. Covered stent placement was reported in 22% of cases. 12.1% of patients who received a covered stent experienced ischemic stroke or neurological deficits [11].

In this case, an accidental arteriotomy to the right subclavian artery adjacent to the vertebral circulation with a hemodialysis catheter was successfully managed using a Perclose device. This report contributes to the growing literature showing endovascular techniques, in particular percutaneous closure devices, are a viable treatment modality for inadvertent arterial cannulation. Further research is necessary as no current studies exist comparing open and endovascular techniques. Various studies exist demonstrating percutaneous closure devices as a management option with little to no adverse effects. Percutaneous devices have the potential to break, potentially causing thromboembolic events. One study estimated the incidence of thromboembolic events related to percutaneous closure devices as 0 - 1.5% [10]. Further guidance is necessary to characterize endovascular management of inadvertent arterial injuries and guide clinicians in this difficult clinical scenario.

Inadvertent arterial injury is a potentially lethal mechanical complication of central venous catheterization. Angiography allows for precise localization of the arterial insertion site, determination of optimal treatment strategy, and confirmation of successful repair. Minimally invasive approaches should be optimized prior to considering open surgical intervention to mitigate potential morbidity and mortality associated with sternotomy and technical difficulties involved with obtaining adequate exposure and direct repair. The use of percutaneous suture-based closure devices is an effective, minimally invasive technique to repair arteriotomies associated with attempted CVC.

Disclosure of Conflicts: None

© 2022 Maiden M. This is an open-access article distributed under the terms of the Creative Commons Attribution License, which permits unrestricted use, distribution, and reproduction in any medium, provided the original author and source are credited.