Neck lumps may represent a number of pathological processes and fine needle aspiration (FNA) cytology is a useful investigative tool. Nasopharyngeal carcinoma is a head and neck tumour that can present with cervical lymphadenopathy. The authors present a case of a patient presenting with a post-nasal space mass suspicious for nasopharyngeal carcinoma both clinically and radiologically, complicated by associated cervical lymphadenopathy showing granulomatous features on FNA cytology. The authors discuss the differential diagnosis implicated by this picture and the clinical decision making involved to come to a successful treatment plan.

Neck lumps may represent a number of pathological processes and fine needle aspiration (FNA) cytology, in combination with thorough clinical examination, is a useful investigative tool. Nasopharyngeal carcinoma (NPC) is a head and neck tumour that can present with cervical lymphadenopathy. Necrotising granulomata present in metastatic nasopharyngeal carcinoma have been described in the literature [1], but there is paucity of published material concerning this phenomenon and how it can affect clinical decision making. This case report highlights such a case and discusses the diagnostic workup and clinical decision making.

A 52-year-old man was referred to the otolaryngology department with a 5-week history of an enlarging painless right sided neck lump, nasal obstruction, muffling of his voice and right sided hearing loss. He described recent unintentional weight loss but no night sweats or swallowing problems. He had no significant past medical history and was a non-smoker. Neck palpation revealed right level II and III lymphadenopathy. Otoscopy revealed signs of a right sided middle ear effusion and tuning fork tests suggested a conductive hearing loss of the right ear. Flexible nasendoscopy revealed a friable mass in the post-nasal space (PNS) obscuring the right eustachian tube opening (Figure 1). 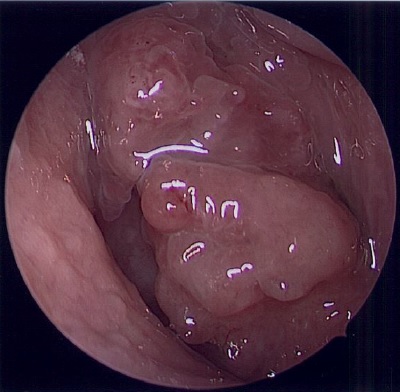 Figure 1. Nasendoscopy revealing a mass in the post-nasal space 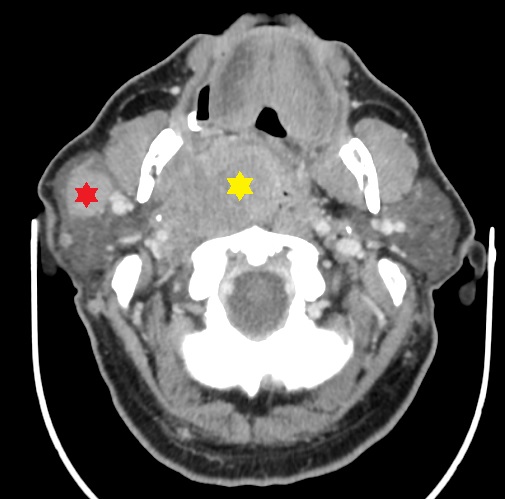 Figure 2. Axial CT scan of the head and neck showing a mass involving the right side of the post-nasal space (yellow star) and an enlarged intraparotid lymph node (red star)

The FNA revealed multiple fairly well-formed necrotising granulomata (Figure 3) within a background of numerous lymphocytes. Malignant cells were not identified and stains for acid-fast bacilli and fungal organisms were negative. 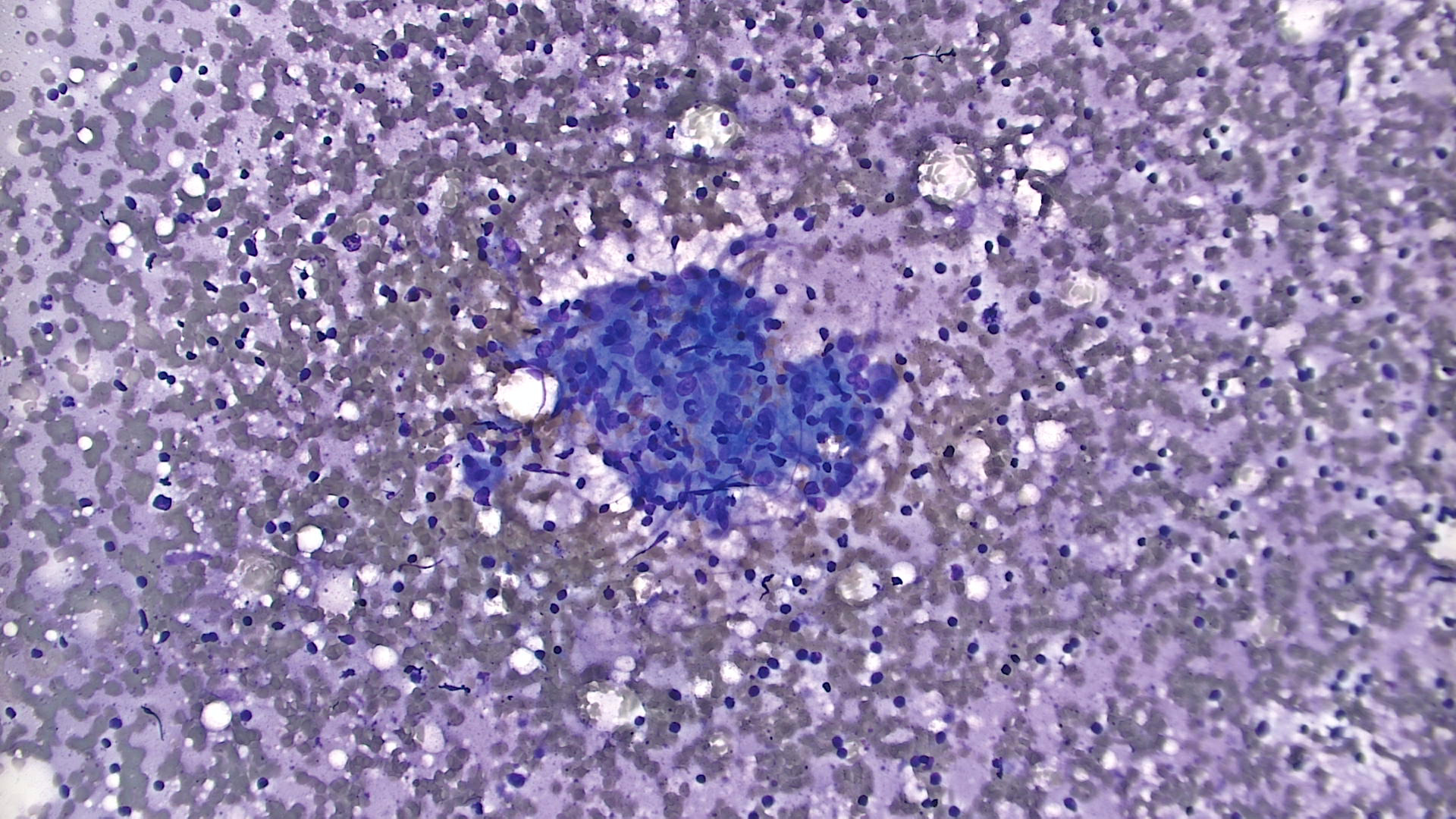 As the clinical and radiological picture was of a fast-growing invasive mass, suspicions of an underlying malignant process remained high. Biopsy of the PNS mass and excisional biopsy of a level V cervical lymph node were performed under local anaesthesia. Histological examination of the lymph node showed features of metastatic undifferentiated non-keratinising nasopharyngeal carcinoma and florid necrotising granulomatous inflammation (Figure 4). Immunohistochemistry showed the tumour cells were positive with cytokeratin MNF116, CK5/6 and p40. EBV (EBER ISH) was positive. Histology of the PNS mass showed lymphoid tissue and poorly differentiated carcinoma with granulomata that were mostly non-necrotising, in contrast with the prominent necrotising granulomata in the neck node (Figure 5). The immunoprofile of the carcinoma was the same as in the neck node, favouring undifferentiated non-keratinising NPC as the diagnosis. The finding of necrotising granulomata without malignant cells in the FNA of the right neck mass reflects a sampling issue in cytology preparations and how FNA is not always representative of the full pathological process. The malignant cells were only evident amongst the necrotising granulomata in the neck node when the whole lymph node was examined histologically. 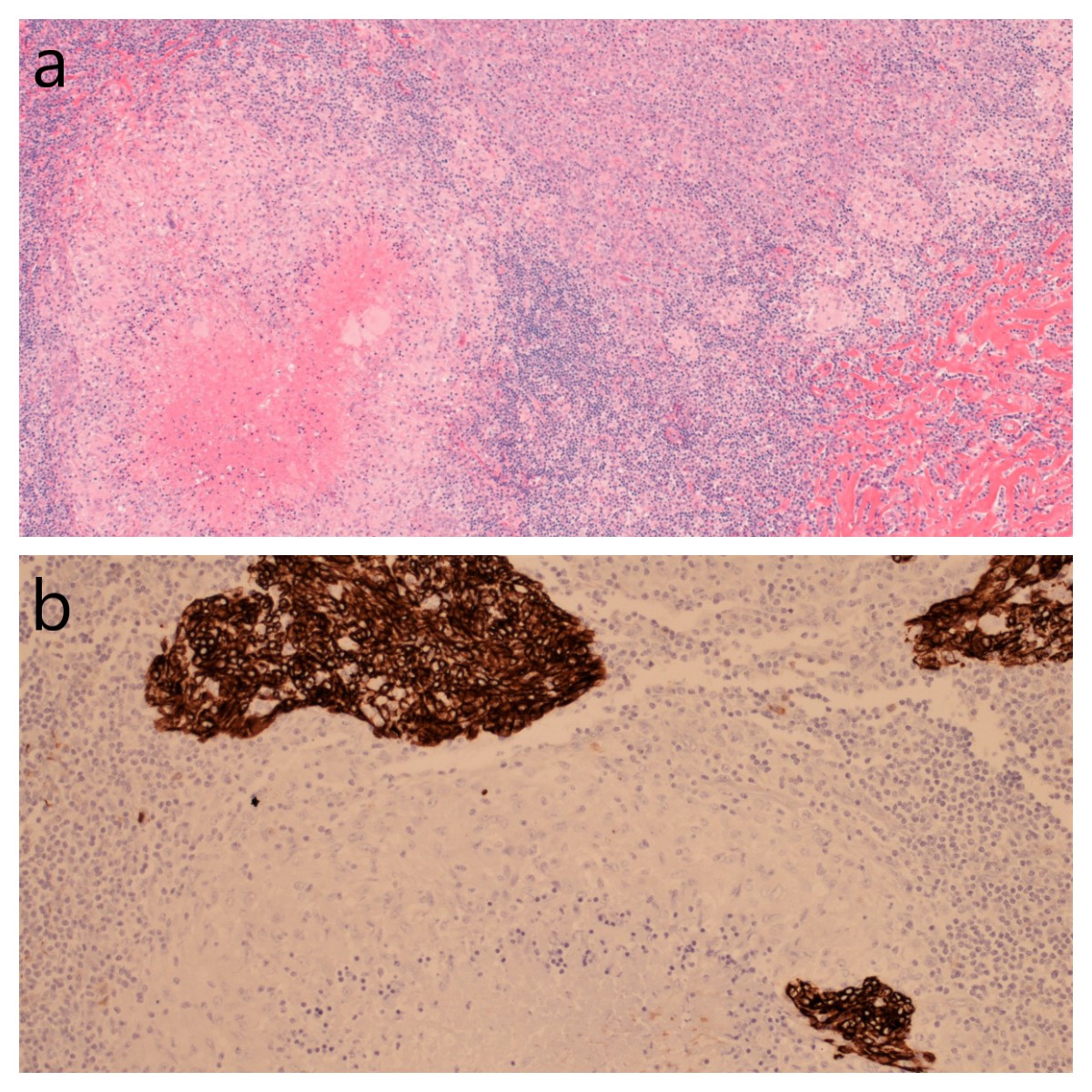 Infective and autoimmune causes of the necrotising granulomatous inflammation such as tuberculosis[2] and granulomatosis with polyangiitis[3] were considered, but c-ANCA level was low and microorganisms were not detected on Ziehl-Neelsen, Grocott and PAS stains. Furthermore, a granulomatous response, including necrotising granulomata, with NPC histology has been described in the literature [1] and infective and autoimmune conditions would not typically cause invasion as seen on the CT scan.

The case was discussed in the head and neck multidisciplinary team meeting. A PET-CT and MRI of the head and neck were obtained and the tumour staged as T4 N2 M0 (TNM 8) NPC. The patient was treated with neo-adjuvant chemotherapy followed by radical chemo-radiotherapy with curative intent. The patient remains under clinical follow-up post treatment and at 1 year there is no sign either clinically or radiologically of progressive disease (Figure 6). 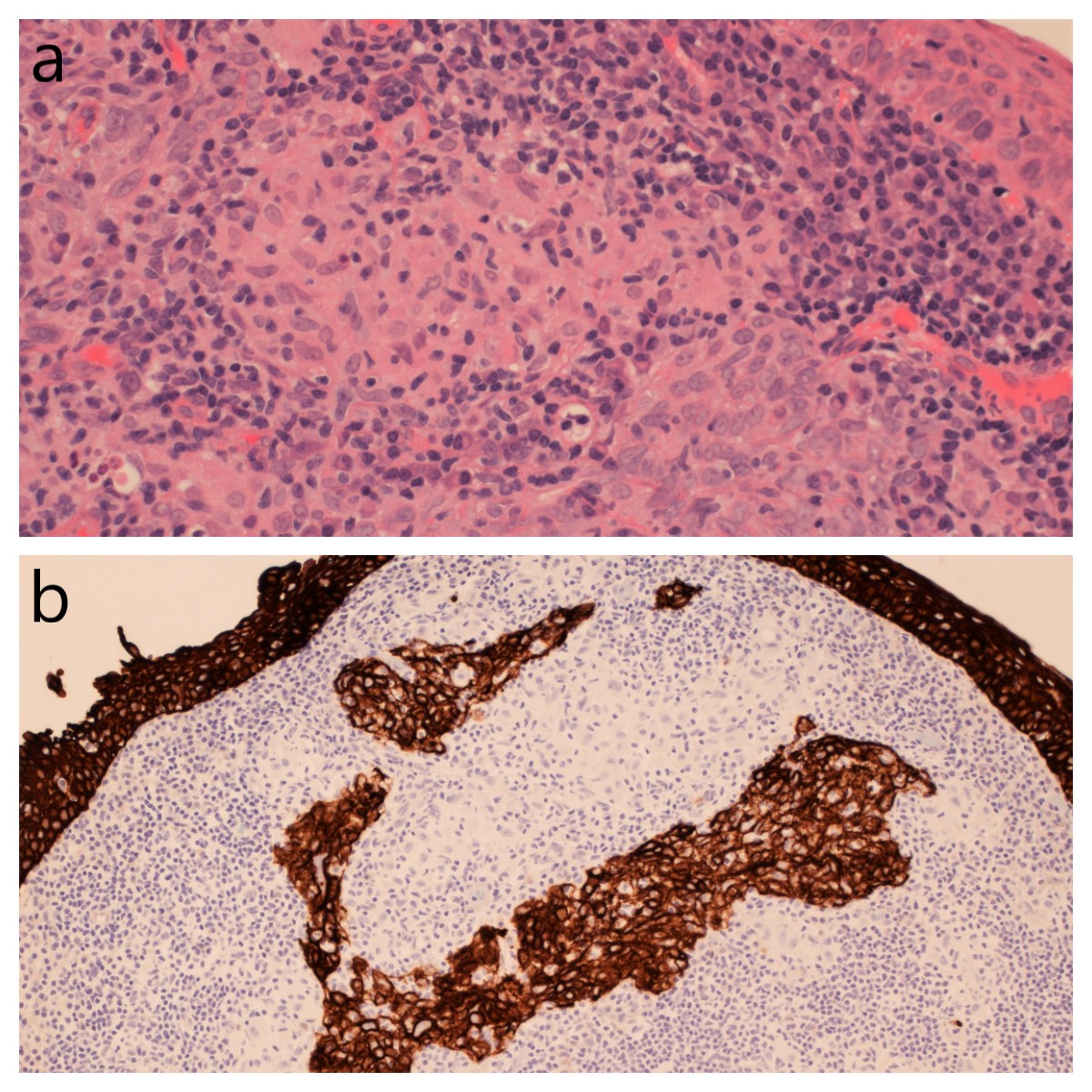 The clinical reasoning utilised to reach the diagnosis and treatment plan and discussion of differential diagnoses is described in the body of the case presentation. There is a lack of similar case reports to compare this case presentation to. One similar case report discusses the diagnostic dilemma of both granulomas and squamous cell carcinoma yielded from cervical node biopsy in two patients with supraglottic carcinoma [4]. This report also highlights the need to exclude sarcoidosis and mycobacterial infections and recognising that some malignant processes can give rise to this morphology. There are many unusual ways in which NPC can appear morphologically. These include amyloid globules, papillary variants and lymphoid hyperplasia which can be mistaken for lymphoma [5].

NPC can present with a neck lump and/or conductive hearing loss unilaterally or bilaterally. Necrotising granulomatous inflammation can be a feature of tuberculosis and granulomatosis with polyangiitis, but also NPC. If there is clinical suspicion of NPC, further investigations and biopsies should be considered. Cytology and histology should be representative and accurate before aggressive oncological treatment is arranged, but a timely diagnosis is also important in suspected cancer cases.

The authors declare no conflict of interest.

No funding was received for this work.

©2021 Cooper F. This is an open-access article distributed under the terms of the Creative Commons Attribution License, which permits unrestricted use, distribution, and reproduction in any medium, provided the original author and source are credited.

Figure 1. Nasendoscopy revealing a mass in the post-nasal space

Figure 2. Axial CT scan of the head and neck showing a mass involving the right side of the post-nasal space (yellow star) and an enlarged intraparotid lymph node (red star)