Use of prophylactic pelvic drain after elective anterior resection: (short- and long-term outcome)

Background: Prophylactic drainage after elective Anterior resections with stapled colorectal or colo-anal anastomosis decreases neither the rate of cases with one or more post-operative complications maybe impacted by drainage nor the complications severity.

Aim and objectives: This study aimed for comparing cases who experienced routine pelvic drainage with those who didn’t regarding the complication rate and severity thereafter elective anterior resection (AR).

Results: This study shows that a statistically significant change was found among the study groups as (With drainage and Without drainage) regarding cardiovascular dis, HTN, IHD, drain, open/Lap, covering stoma and mean mortality during hospital stay.

No significant change statistically was found among the study groups as (With drainage and Without drainage) as regard post op leak, localized abscess (infected haematoma), and mortality during hospital stay.

Conclusion: Routine pelvic drainage after elective anterior resection does not reduce the rate or severity of anastomotic leak. It may, infrequently, be harmful.

The colonic lumen comprises from 108 to 1010 aerobic and an-aerobic germs /gm of feces. This may clarify why post-operative infectious complication, the occurrence of it ranged between 10 and 70%, can be more in cases underwent operations of the colon than in those underwent any other abdominal operations. Anastomotic leakages are the main reasons of post-operative infectious complications, accountable for 25- 35% of mortalities [1].

The Guidelines for Avoidance of Surgical Site Infections (SSIs), made by the Centers for Diseases Controlling and Preventions (CDC) in 1999, indorses that ‘If drainage is essential, utilize a locked suction drains and eliminate the drains once it possible’. New RCTs and metanalyses have maintained the restricted usage of prophylactic intraabdominal drainages for several gastro-intestinal operations [2].

The majority of surgeons were supporter repetitive usage of drains after pelvic anastomose. Proponentes of this maintain that they permit egress of fluids collection that have the possibility of becoming infected, permit early recognition of anastomotic dehiscence, and do no harm. Objectors to the use argue that it can impede healing of the anastomoses confer no benefit and may cause harm. A recent RCT of pelvic drainage thereafter rectal ressection suggested that a pelvic drain thereafter rectal resections didn’t present any advantage to the patients [4].

The prophylactic drainages of the abdomen space were suggested for these same causes in 1950th. Prophylactic drainage is supposed to (1) reduce the rate of anastomotic leakages by the evacuation of serositis and blood that, once contaminated, may cause sore formations and hole of the abscess into the inosculation;  (2)  reduce the complication  severity  via  early  diagnosing;  and  (3)  ease  the  diagnosing  of  intra- peritoneal hemorrhage [5].

In contrast, surgeons who are opposite to drainage trust that it (1) really excites the formations of serous fluids; (2) may result in infections from exterior; (3) rises the rate of leakages via avoiding the mobilizations of omentum and neighboring organs, obstructing their closing action on the anastomotic sutures or even making leak by mechanically erosion of the inosculation; and (4) is enclosed off rapidly [6]. Suction drainages can (1) reduce the quantity of infection coming from exterior by preserving -ve pressure on the tissue, (2) be accompanying with lesser post-operative adherences, (3) be accompanying with lesser anastomotic leakages, and (4) be encapsulated less rapidly. Suction drainages was utilized in 1 of the RCTs, while non-suction drainages were utilized in the other [7].

We, consequently, performed a great, multi-center, prospective, controlled by randomization, to find out (1) whether prophylactic drainages reduced the complication severity and rate ultimately connected to drainages, thereafter colonic resections followed directly by intraabdominal suprapromontory colonic inosculation; and (2) whether one kind of drains (suctions or non-suction) was better than the other.

83 cases with ages mean of 67 years (22-95) enrolled in this work from (December 2020 to December 2021). Data collections of all cases was completed but all the cases weren’t enrolled in the research at similar time.

Colonic Preparations:  All cases experienced colonic mechanically preparations, counting the administrations of laxatives (sennosides) or poly-ethylene glycol, that comprised the administrations of enemas which were applied at 6 PM and in the morning (3 h) preoperatively. All cases have a 1-dosage mixture of systemic ceftriaxone sodium and metronidazole at anesthesia inductions.

Resections and Anastomosis: Mechanical bowel preparations has been performed in all cases the day pre-operation. Colorectal inosculation stapled by means of linear stapling device. AII colorectal inosculates were performed by means of a circular stapling instrument and were intra-operatively examined by trans-anal air insufflations. The intestine was unfocussed by a defensive loop ileostomy in 38 cases of 53 cases who had pelvic drains and 12 cases out of 30 in no drainage group for rectal resection with whole mesorectal excisions and coloanal inosculation in cases with lower rectal tumor.

Random Allotment: After the resections and inosculation were accomplished and confirmed for airtightness, cases experienced drainages (D+) or not (D−), as shown below the creased upper right corner of questionnaires rather than the envelopes technique. Cases have been located in D+. Arbitrary allocation was stable via blocks of four in every center. This work was accepted by the ethics committee of the coordination center.

Drainage: A locked drainage system of silastic has been utilized in all patients, no suctions has been used. The diameter of drainage was 24 Ch.

End Points: The initially end point was the percent of cases with 1 or more post- operative complications ultimately connected to drainages, counting (1) Deep complication that maybe impacted by drainages and for which drainages can cause earlier diagnosing, counting anastomotic leakages, general or local peritonitis, intraabdominal haemorrhage, or haematoma. Anastomotic leakages were detected via the egress of fecal fluids via drain, by a following procedure or an autopsy (accomplished regularly for all cases who passed away in hospital). The post-operative interval comprised the total hospitalization, regardless of its period, and the 30-day after discharging. All cases were seen on that date as wounds surface (infections) or deep (hematomas, sores, and fistulae) side-effects are recognized to happen after discharging.

Statistical analysis of the data:

Statistical analysis was performed via SPSS version20. Data had been examined for normal distribution by means of the Shapiro Walk testing. Qualitative data have been introduced as frequencies and relative percentages. χ2 test was utilized to determine change among qualitative variables as specified. Quantitative have been introduced as mean and SD. Student t testing has been utilized to determine variance among quantitative variables in 2 groups.  Results considered significant at P-value < 0.05.

This study shows that a statistically significant change was found among the study groups as (With drainage and Without drainage) regarding cardiovascular dis, HTN, IHD, drain, open/Lap, covering stoma and mean mortality during hospital stay.

A statistically nonsignificant change was found among the study groups as (With drainage and Without drainage) regarding post op leak, localized, abscess, generalised and mortality during hospital stay.

The current work showed that 3 out of 83 cases (2 with drains and one without the drain) had a post anastomotic leak with significant difference in age, cardiovascular comorbidities and no defunctioning stoma was done on the same set with elective anterior resection [8,9].

Prophylactic drainage after elective Anterior resections with stapled colorectal or colo-anal anastomosis decreases neither the rate of cases with one or more post-operative complications maybe impacted by drainage nor the complications severity.

Table 1: Comparing among the study groups as regard demographics.

Table 2: Comparing among the study groups as regard different parameters.

A statistically nonsignificant change was found among the study groups as open/lap (With drainage and without drainage) post op leak, localized abscess, generalized peritonitis and mortality during hospital stay.

Figure 1: Comparing among the study groups (With drainage and Without drainage) according to gender.

Comparing among the study groups as regard gender 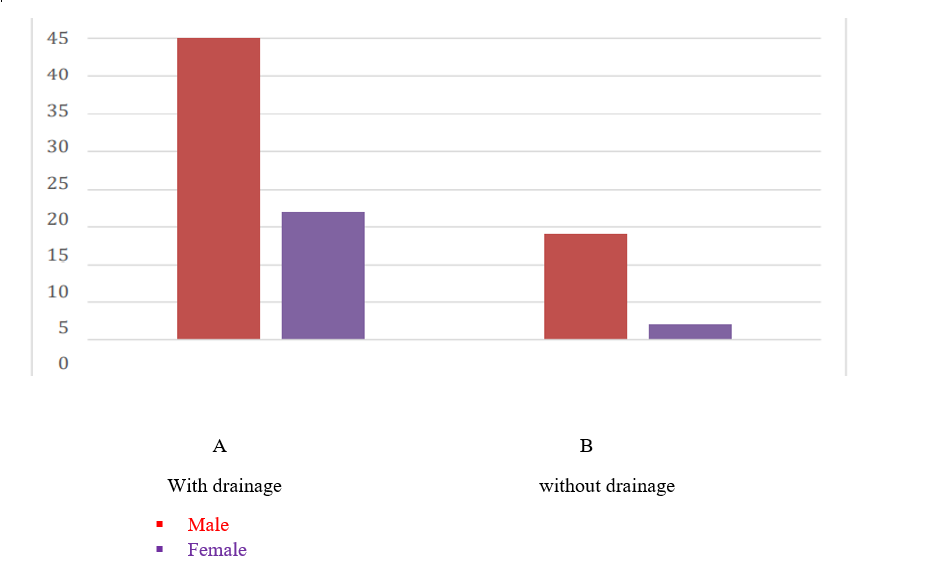 Figure 2: Comparing among the study groups (With drainage and Without drainage) according to age. 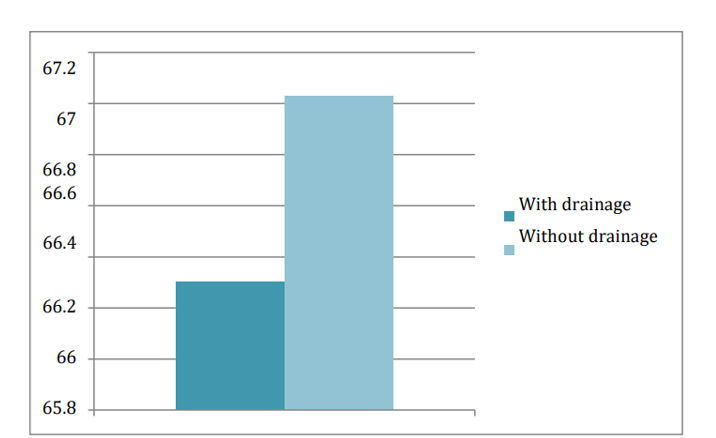 In agreement with our results, Hirahara et al. [2] found nonsignificant changes in terms of the mean age of the cases, males/females’ ratio, BMI, and concurrent disorders among the study groups.

In disagreement with our results, Hirahara et al.  [2] revealed that there was insignificant difference between both groups as regard cardiovascular diseases, Hypertension, Ischemic heart disease.

Post-operative outcomes are summarized in a study by Hirahara et al. [2]. Total post- operative problems built on the Clavien-Dindo classifications were found in 31% and 30% of cases in the drain and no drain groups, resp., and a nonsignificant change was found in complication rates among the study groups. There was no in-hospital death in this work, but single case in the no-drain group who advanced Petersen’s hernia needed re-operation on 8thday post-operatively.  As regard the post-operative hospitalization, a nonsignificant change was detected among both groups. When taking the existence and non-presence of post-operative problems into attention, the hospitalization period didn’t vary among both groups.

In disagreement to preceding suggestion, the metanalysis by Rondelli et al., [12] which enrolled randomized and nonrandomized reports, revealed that the existence of a prophylactic drains decreased the occurrence of extra-peritoneal colorectal AL and the rate of re-operations thereafter anterior rectal resection. But the protecting value of PD was maintained by the data from nonrandomized reports only, as the sub-group investigation of RCTs didn’t display any advantage for PD usage.

Moreover, the big Dutch study by Peeters et al., [13] revealed that, on multi- regression analysis, the non-presence of a pelvic drainages and a de-functioning stoma were the issues accompanying with anastomotic dehiscence. More definitely, the existence of one or more pelvic drains postoperatively was significantly accompanied with a lower AL: 9.59% of cases with pelvic drainages had leakages, in comparison with 23.50% of cases with no drain, and 8.20% of cases with a de-functioning colostomy or ileostomy had a leakage, in comparison to 16% with not a stoma. Consequently, the authors reported that, in a try to minimalize the risks of clinical AL, the constructions of a de-functioning stoma and the assignment of one or more drainages in the presacral cavity looks desirable for cases with proximal as well as distal rectal tumors.

Merad et al. [10] showed that the post-operative death in their study was 4.4%, which was within the rates of post-operative mortality reported in the other studies:

Routine pelvic drainage after elective anterior resection does not reduce the rate or severity of anastomotic leak. It may, infrequently, be harmful.

The Authors declares no potential conflicts of interest with respect to the research, authorship, and / or publication of this article.

Funding: There is no funding source -Authors' contributions: Mr. Mena: collect the data, writing the article and do analysis; Mr. Bisheet: review and revise the paper

©2021 Bisheet G. This is an open-access article distributed under the terms of the Creative Commons Attribution License, which permits unrestricted use, distribution, and reproduction in any medium, provided the original author and source are credited.

Table 1: Comparing among the study groups as regard demographics.

Table 2: Comparing among the study groups as regard different parameters.

Figure 1: Comparing among the study groups (With drainage and Without drainage) according to gender.

Comparing among the study groups as regard gender

Figure 2: Comparing among the study groups (With drainage and Without drainage) according to age.