Title: Preeclampsia rates are elevated during winter month when sunlight dependent vitamin D production is reduced. Aim: To assess maternal vitamin D deficiency in early pregnancy and risk of preeclampsia.
Settings and Design: Nested case control study. Two maternal blood sample, one at <20 wks and other at term along with cord blood at delivery were taken. Patients were classified into preeclampsia (n=57) and control group(n=178) after abstracting past medical records at delivery. Methods and Material: Vitamin D was estimated by 25-Hydroxyvitamin D 125 I RIA Kit and categorized according to ACOG (2011) criteria. Statistical analysis used: Pearson c2, ANOVA and logistic regression were used. Linear correlation and regression coefficient was used between maternal 25(OH) D at <20 wks and term and cord serum 25(OH)D levels. Results: serum 25(OH)D concentrations in early pregnancy were 56% significantly lower in women who subsequently developed preeclampsia compared with controls (mean, 9.79 ± 4.09 ng/ml , 95% CI, 8.71 –10.88ng/ml, vs. 22.26 ± 15.28 ng/ml and, 95%CI, 20.0 -24.52 ng/ml; P <0.001) independent of age, BMI, calcium intake, socioeconomic status, periconceptional multivitamin use, residence. There was 17 times increased risk of preeclampsia in vitamin D deficient mothers compared to controls at early pregnancy and at term. (P<0.001; rr =17.93). Newborns of preeclamptic mothers were more than three times as likely as newborns of controls to have hypovitaminosis D(relative risk 3.55). Conclusions: Maternal vitamin D deficiency is highly prevalent in early pregnancy and is an independent risk factor for preeclampsia.

A nested case control study was conducted on total number of 500 patients enrolled from September 2011 to May 2013 attending antenatal clinic who initiated prenatal care before 20 weeks gestation and were younger than 45 years of age .The patients with history of diabetes mellitus, chronic hypertension, chronic renal disease, previous history of vitamin D intake, patients with fat malabsorption, with gastric bypass surgery, diagnosis of cancer, lupus, hepatitis, multiple intrauterine pregnancy, women taking anticonvulsant drugs were excluded. Participants completed a schedule administered by a interviewer at enrolment after written informed consent The schedule was used to gather information on socio-demographic, anthropomorphic, behavioral characteristics , reproductive and medical histories ,socioeconomic status(modified kuppuswami index) Women were enquired about physical activity from 10 am to 2 pm in sun in the year before the index pregnancy or during pregnancy and to rate the usual intensity of this activity as low(<3 hrs) or high (3hrs) according to duration of sunlight exposure .In Our study population only face and arms were exposed to sunlight. For Pre pregnancy body mass index (BMI) in our study most of patients belonged to low socioeconomic background and didn’t have record of weight in pre pregnancy period. So in many cases weight was taken at first visit and was adjusted for pre pregnancy weight. Season of sample collection was defined as winter (December to February), spring (March to May), summer (June to August), and autumn (September to November). A history of maternal education (<12 or 12 std), and Multivitamin use at least once per week in the periconceptional period (defined as the 3 months before and 3 months after conception) were also taken.

At the same time blood was collected aseptically by venipuncture in a 5 ml glass tube. Serum samples were stored at -20 or lower for estimation of 25 hydroxyvitamin D(25(OH)D at later stage. Subjects were followed in second and third trimester and at delivery maternal blood and cord blood sample were collected. After delivery, Medical records were abstracted to ascertain blood pressures and urinary protein measurements throughout gestation, use of antihypertensive medications, ante partum and delivery events, family history of DM and neonatal outcomes. At this point patients were categorised into preeclampsia group and control group. Among total of 500 women enrolled in the study, 385 returned for follow up at first visit, 110 were subsequently lost in second and third trimester follow up, and 20 had delivery at other hospital or at home.11 samples were found to be contaminated, 9 samples were hemolysed. Only that subjects were taken in study who had at least one sample at less than 20 wks, one term sample and cord blood sample. So only 235 had proper follow up till term delivery. 57 women out of them were identified as preeclampsia and 178 were taken as control. All had 3 blood samples i.e sample at <20 wks gestation, term, and cord blood. Preeclampsia group was further divided into severe and mild preeclampsia There were 29 cases of severe preeclampsia and 28 cases of mild preeclampsia. Mean gestational age of blood sample collection at <20 wk in preeclampsia and control group were 16 3.2 wks and 16 2.2 wks respectively. At term gestation, same values were 36.6 2.4 wks and 37 2.4 wks respectively.

Statistical analysis was done using SPSS 16. We used Pearson c2 statistics to compare proportions of women or neonates with vitamin D deficiency by case status. One way analysis of variance was used to compare the significant difference in mean among the group and if this test resulted significant then multiple range test (SNK) was used to find out pair wise difference in means .linear correlation and regression coefficient was used between maternal 25(OH) D at <20 wks and term and cord blood 25(OH)D levels. Binary logistic regression was used to assess the independent effect of maternal early-pregnancy 25(OH)D concentrations on the risk of GDM. The sample size was calculated assuming the prevalence of subjects of 75%; absolute error 6% at 5% level of significance at two tailed tests, the sample size came out to be 200. Taking dropout of 60%, 500 cases were registered for the study.

We have found high incidence of vitamin D deficiency at early pregnancy and at term i.e. 76.1% (179 out of 235) vs. 77.2% (181 out of 235) respectively. Preeclamptic cases were mostly in age group of 25-29 yrs, overweight, had low level of physical activity in sun and less use of periconceptional multi vitamin use from beginning of the pregnancy. Most of the preeclampsia cases occured in winter season Low physical activity in sun vegetarian diet, winter season were important risk factors (combined likelihood ratio (LR)=52.436 ,R2=0.881). Including these risk factors 97% of 25(OH) D concentrations were correctly identified. Inclusion of other risk factors like BMI ,socioeconomic status, residence, age, periconceptional multivitamin use . hardly changed overall 25(OH)D concentration in cohort study. In our study we found out that vitamin D deficiency in early pregnancy i.e. at less than 20wk gestation was more prevalent among women who later developed preeclampsia than among women who did not develop preeclampsia (100% vs. 68.5% respectively, ). 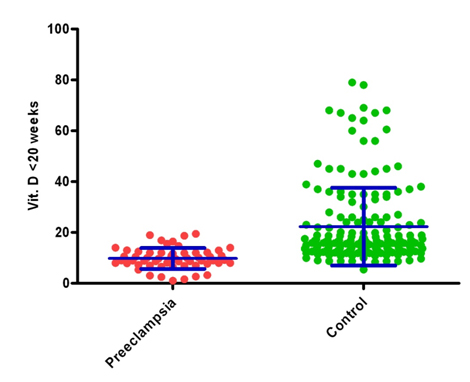 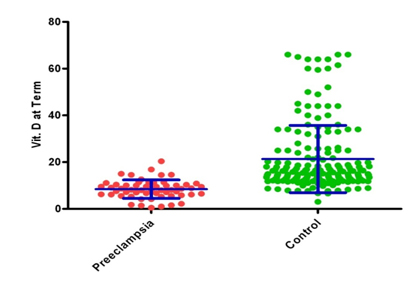 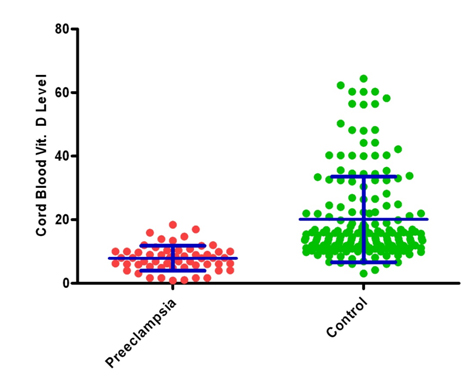 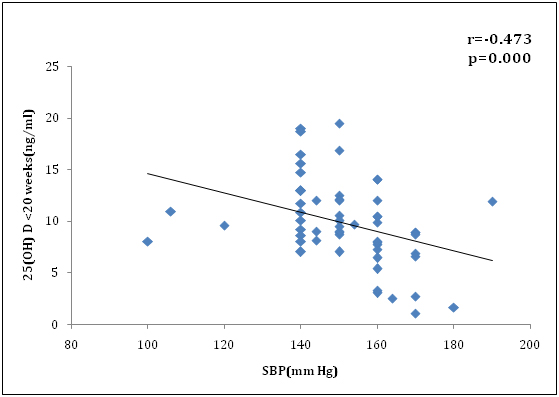 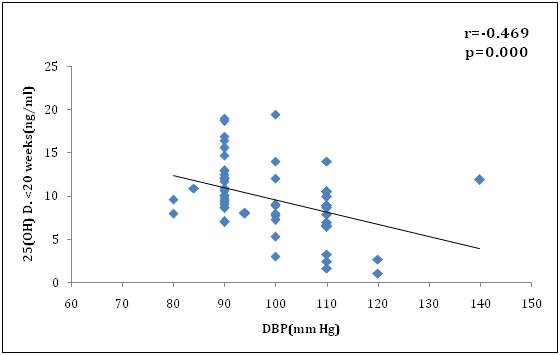 Figure 5. Correlation of 25(OH)D concentration(ng/ml) at <20 wks and diatolic B.P 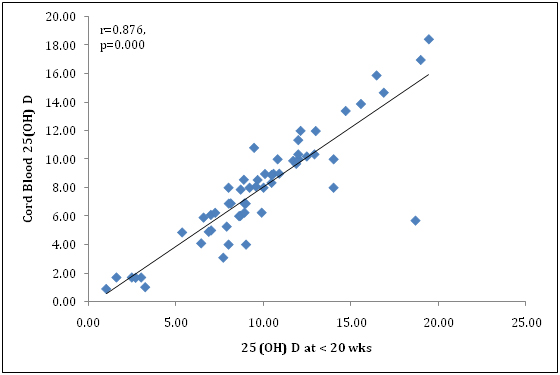 We have found a high incidence of vitamin D deficiency (76.1%) in early pregnancy in a tropical country like India which has abundant sunlight for most of the year. This paradox can be explained due to many prevalent social and cultural practices i.e. increased urbanisation, poor outdoor activity, greater pollution that preclude exposure of women to sunlight coupled with skin pigment melanin absorb UVB photons and reduces vitamin D synthesis by greater than 90%.

Overall, our findings suggested that low serum 25(OH)D level in early pregnancy was strong and independent risk factor for preeclampsia.This can be explained by the fact that the active form of vitamin D, 1,25-dihydroxy vitamin D3, act as free hormone and regulates transcription and function of genes associated with placental invasion, normal implantation, and angiogenesis . Furthermore, abnormal implantation is proposed to be mediated by an inappropriate immune response between mother and baby which is one of the etiological factor for preeclampsia This might be due to abnormal expression of 1 alfa hydroxylase, vitamin D activating enzyme in preeclamptic pregnancies revealing a potential role of 1,25(OH)2D as regulator of placentation.

The immunomodulatory properties of Increased inflammatory response might be associated with vitamin D deficiency . Also, vascular structure and compliance, elasticity, and intima media thickness are more favorable among women supplemented with vitamin D . Vitamin D deficiency may also elevate blood pressure . Finally, the 1,25-Dihydroxyvitamin D3 has been shown to regulate angiogenic processes through direct effects on renal vascular endothelial growth factor (VEGF) gene transcription and proteinuria of preeclampsia is thought to be mediated by VEGF gene.

In our study , preeclampsia rates were elevated during winter month when sunlight dependent 25(OH)D production was reduced .There were 8(14%) cases of preeclampsia in summer, 13(22.8%) in spring and rest 36(63.2%) in winter. Whereas in control group same values were 25(14%) in summer, 22(12.4%) in autumn, 71(39.9%) in spring and rest 60(33.7%) in winter. The p value<0.001 was significant for winter season. Seasonal variations in disease risk may be an indicator of an association between vitamin D status and the disease. Mostello et al. in 2002 reported preeclampsia is also more common in dark-skinned women (living in northern latitudes) [20], who typically have a higher prevalence of hypovitaminosis D than is found in comparable white women [21].

In Nordic countries, the incidence of 2021 Copyright OAT. All rights reservis the lowest in summer and early autumn, a pattern that mirrors the trends in seasonal variation in vitamin D status 22. In Nordic countries, the lack of UVB in sunlight between October and March means that there is no cutaneous vitamin D synthesis during those months . A 2011, systematic review found that hypertension in pregnancy is more common in winter or rainy seasons when vitamin D deficiency is also higher .

In a similar study by Baker et al. involving 43 cases and 198 matched controls, maternal 25(OH)D below 50 nmol/l at 15–20 weeks gestation was associated with a five-fold increase in the odds of severe preeclampsia diagnosis after adjustment for multiple covariates adjusted odds ratio (OR) 5.41, 95% confidence interval (CI) 2.02 to 14.52

In contrast, two studies found no differences in first or second trimester 25(OH) D between women at low or high risk for preeclampsia who did or did not develop the disorder later in pregnancy .

Marya et al. found out that after 8 to 10 weeks of supplementation of vitamin D, blood pressure was significantly reduced in the treated group, and there was a suggestion that a smaller proportion of supplemented than control women developed preeclampsia (6% compared with 9%) .

Our results also highlight that neonates of preeclamptic mothers are at particularly high risk of vitamin D deficiency. However, these results are not unexpected. The fetus relies entirely on the vitamin D stores of the mother, so if the mother is deficient, so is the fetus . Because early-life vitamin D deficiency has been associated with adverse health outcomes in offspring , neonates of preeclamptic mothers may be an easily identified group that needs a targeted intervention to improve vitamin D status from birth. et al.,

Vitamin D deficiency has become a growing concern in our country. Vitamin D deficiency is common among pregnant women and has been associated with elevated risk for pregnancy complications such as preeclampsia and a number of serious short- and long term health problems in offspring . Circulating vitamin D can be modified by food consumption (e.g. fatty fish), supplement use, and outdoor sun exposure. Optimizing the effective dose of vitamin D supplement continues to be a challenge. Our data raise the possibility that treating vitamin D deficiency in pregnancy, via supplementation or lifestyle measures, can contribute to the prevention of preeclampsia and promoting neonatal well-being.

©2015 Madhu J. This is an open-access article distributed under the terms of the Creative Commons Attribution License, which permits unrestricted use, distribution, and reproduction in any medium, provided the original author and source are credited.

Figure 5. Correlation of 25(OH)D concentration(ng/ml) at <20 wks and diatolic B.P