Ovarian cancer is the most lethal gynecological cancer and the fifth most common cause of malignancy in women [1].  Ovarian cancer is difficult to detect and diagnose early, therefore patients often initially present with advanced disease and poor prognosis.   The current standard of care includes primary tumor debulking surgery followed by cytotoxic chemotherapy with 70% of patients achieving a complete initial clinical response.   The current standard of care for primary chemotherapy is six cycles of combination of taxanes agent plus a platinum agent given once every three weeks [2].  Although multiple studies have evaluated different dosing parameters and routes of administration to reduce toxicity and optimize efficacy, often clinical practice requires dose reductions or treatment delays to complete six cycles of therapy [3,4].

It is well established that granulocyte-colony stimulating factor (G-CSF) minimizes the magnitude and duration of neutropenia and improves overall treatment outcomes primarily by decreasing the risk of infection, hospitalization, and potentially fatal complications from sepsis [5-9].   In addition to increasing the risk of developing febrile neutropenia, prolonged neutropenia often leads to delays in treatment and dose reductions of planned chemotherapy [7,8].  Anemia is another common development during chemotherapy that is responsible for dose reductions and treatment delays; and prevention of anemia has been suggested to improve treatment outcomes both efficacy and quality of life.  Intratumoral hypoxia is associated with promoting resistance to chemotherapy and/or radiotherapy, genetic instability, angiogenesis, and inhibition of apoptosis [9-12].  New and improved growth factor support with agents such as pegfilgrastim and darbepoetin alfa have the potential to improve the management of chemotherapy-induced neutropenia and anemia, respectively [13].

There is minimal information about the impact of treatment delays or dose reductions on treatment responses and overall outcomes in cancer patients. The primary objective of this study was to quantify the impact of dose reductions and treatment delays in an in vivo orthotopic ovarian cancer model.   In addition, the role of growth factors to improve the ability of patients to receive “full dose on time” was evaluated.

The protocol was reviewed and approved by the institutional animal care and utilization committee (IACUC) prior to initiating any animal work.  All mice were handled according to the Guide for the Care and Use of Laboratory Animals.  HeyA-8 or SKOV3.ip1 cells were grown to confluence and harvested by trypsinization with 0.25 mg/mL trypsin/EDTA and suspended in PBS before inoculation into mice.  HeyA-8 cells (3 × 106) and SKOV3.ip1 cells (9 × 106) were collected, counted and dispersed in a volume of 200 µL of PBS or serum-free cell culture medium and were injected into the peritoneal cavities of six-week-old female nude mice

Two intraperitoneal (IP) ovarian cancer orthotopic models were utilized including the HeyA-8 orthotopic model to represent chemosenstive, aggressive ovarian cancer or SKOV3.ip1 to represent multi-drug resistant metastatic ovarian cancer, to evaluate the dose and timing of administration of taxane/platinum combination regimen.   There were a total of six groups including: untreated, vehicle alone, treatment control A paclitaxel/carboplatin alone once every three weeks, and treatment control B paclitaxel/carboplatin + GCSF once every three weeks, experimental treatment delay group and experimental dose reduction group  for each orthotopic model with ten mice in each group (Figure 1).  A total of 90 mice per each cell line and 180 mice were required to complete the study. 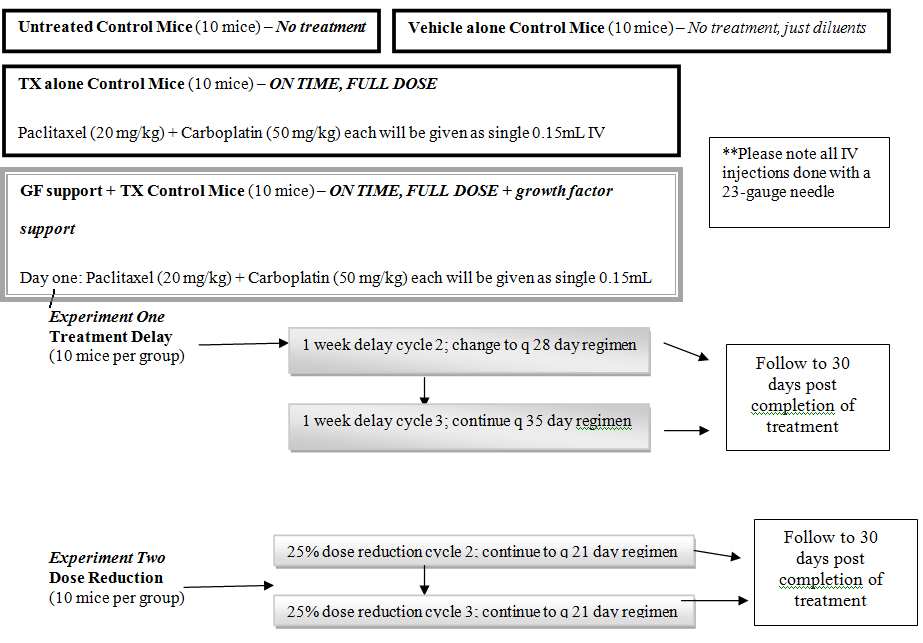 As surrogates to reflect both increasing ascites accumulation and tumor burden the body weight and abdominal circumference were quantified three times a week as average measurement for each parameter.  Abdominal circumference measurements were obtained with a special device (restraining tube with fixed soft ruler) at the body’s widest mid-point marked and monitored throughout the experimental period while the animal was held in a prone position.  In addition, mice were monitored three times a week for evidence of signs/symptoms of moriboundity (weight loss, anorexia, hunching, listlessness, extensively enlarged abdominal cavity, lethargy, etc.). Paracentesis was performed to remove fluid up to 1 mL as appropriate to relieve abdominal bloating and fluid volume was measured up to three times for each animal before sacrificing.  At the end of the experiment, all remaining mice were sacrificed humanely via CO2 inhalation followed by cervical dislocation.

Descriptive statistics were completed to evaluate delay in tumor growth and/or tumor regression and contrasted with respective to toxicity profiles.  T-test analysis was used in the data analysis to evaluate and compare the activity and toxicity, respectively, for each experimental arm compared to the treatment control arms with and without growth factors.

A summary of the impact of dose reductions and treatment delays on the overall survival rate of the HeyA-8 and SKOV3.ip1 tumor bearing mice is reported in Figure 2 and Table 1.

At postmortem examination, tumors were found on the surface of the peritoneum, uterus on the diaphragm, in the liver, and on the intestines in both control and treated groups.   Ascites volumes were quantified during each experiment and postmortem examination. Groups were compared and the results are depicted in Table 2. The ascites onset in the HeyA-8 non-treatment and vehicle control groups was very early with the mean onset of ascites formation of 2.9 ± 0.8 and 33.1 ± 0.8 days, respectively. However, in the HeyA-8 paclitaxel/carboplatin + GF control group, a significant delay in the ascites formation was observed with a mean onset time of 53.1 ± 5 days (P<0.01).  A similar improvement was observed in the SKOV3.ip1 paclitaxel/carboplatin + GF control group having delayed onset of ascites formation compared with non-treatment groups (p<0.05).   No difference in the onset of ascites formation was observed between the non-treatment and treatment delay or dose reduction groups in either the HeyA-8 or SKOV3.ip1orthotopic models in this study.

In both the HeyA-8 orthotopic model representing the aggressive chemosensitive newly diagnosed ovarian cancer and the SKOV3.ip1orthotopic model representing the multi-drug resistant or recurrent ovarian cancer, a decrease in overall survival and ascites formation was observed compared to the full dose on time paclitaxel/carboplatin treatment control group.  In addition, the use of growth factors, pegfilgrastim and darbepoetin, significantly improved overall survival and delayed the onset of ascites formation.  We hypothesis the addition of growth factors improved the ability of mice to tolerate full dose, on-time chemotherapy which resulted in an improvement in overall survival and tumor response.

This is a prospective study to quantify the impact of dose reductions and treatment delays in an in vivo human ovarian cancer model.   This study confirms what in the clinical setting intuitively has been suggested; that both treatment delays and dose reductions have a negative effect on treatment response.  This new data can be used to help define the importance of full dose and on time dose of the taxane/platinum agents used in treatment of newly diagnosed and recurrent ovarian cancer.  Furthermore, this study demonstrated the benefit of prospective use of growth factors, specifically pegfilgrastim, in combination with the taxane/platinum regimen improved tumor response and ultimately overall survival.

©2015Mosley S.This is an open-access article distributed under the terms of the Creative Commons Attribution License, which permits unrestricted use, distribution, and reproduction in any medium, provided the original author and source are credited.