Pediculosis in a paediatric greek population: regressions of socioeconomic factors

Aim: The aim of this study was to further investigate the relations of studied socioeconomic variables towards the understanding of pediculosis dynamics in the Greek population.

Materials and methods: A total of 435 parents or parent couples were investigated with respect to their socioeconomic background and the incidence of pediculosis in their children. Linear regression has been applied in order to identify further patterns of pediculosis dynamics.

Discussion: It appeared that income and education are influential with respect to the incidence of pediculosis, while parents’ gender appears also of great importance since mothers are the determining factor in pediculosis prevalence.

Pediculosis in humans and especially in children is a very common dermatological disorder caused by the parasite Pediculus humanus capitis [1-3]. Additional human-infesting parasites include Pediculus humanus humanus and Pediculus phthirus pubis. The lice Pediculus humanus capitis is considered the most common parasite infesting children [4]. The older evidence on lice comes from an archaeological finding, a hair in north-east Brazil dating back to 8000 B.C. In humans two species of the parasites have been mainly found, the Pediculus humanus capitis and the Pediculus humanus humanus [5]. Lice are small, wingless parasites that are unable to survive without a host [6]. A louse contagion it occurs mostly in densely inhabited areas, refugee camps or asylum, prisons and especially when the hygiene conditions are not adequate or poor. Although, lice could be considered simple organisms there is not much knowledge concerning their genome. This makes the task of understanding their biology, taxonomy and epidemiology more difficult. What it is known concerning their genome is that there are three different taxonomic genomic mitochondrial axes-classes of the head lice. The three classes (A, B and C) of head lice were described by analyzing the mitochondrial DNA (cytochrome b and cytochrome oxidase subunit 1), and of them, only one (clade A) was present in body lice [7]. The strange part about genomic taxonomy is that it appears that there is no distinct genomic profile for lice species, a fact that can be attributed to the phenomenon of evolution of the parasites as well as to their possible interbreeding [7].

It is considered to be an infestation of both developed as well as developing countries, in other words lice do not make discriminations. For example, in Australia it has been reported that on average 13% of the children are being infested by louse. In Brazil the incidence gets as high as 43% in urban areas and 28% in the rural areas. Similarly, in China the incidence of pediculosis has been on average 14%. Finally, in England it is approximately on the 2% level [4]. Interestingly, it has been reported that in developed countries such as Canada and the United States, Caucasians are being more frequently infested as compared to black individuals [8]. Similar reports have shown that pediculosis is more frequent in low income social groups [9]. It is known that in general girls are being infested more frequently than boys and the infestation reaches its peak between the ages of 3-11 [2,4].

Despite the incidence of the infestation, little is known on lice both from the epidemiological point of view as well as its biology. It also appears that the phenomenon of lice infestation has local characteristics varying from country to country.

We have reported previously, that two main factors appearing to influence lice infestations was gender, family status further influenced by income and nationality [10]. From our previous work it appeared that there was a significant interest towards investigating influencing variables with respect to their interrelation.

Thus, the aim of this study was to investigate the patterns of variable relations among the factors found to influence lice infestation in children.

The detailed sampling procedure has been published previously [10]. Briefly, the study was conducted in the urban area of Athens during the period 2004-2006. The target group consisted of children from the area’s kindergartens. A total of 435 parents or parent couples were investigated with respect to their socioeconomic background and the incidence of pediculosis in their children. Children were between the ages of 2-6 and upon consent of the child’s guardian they were included in the study. Questionnaires were filled out by a trained health professional after a children’s clinical examination. For this purpose we used the assistance of the teachers from the kindergartens and primary schools. Questionnaires were anonymous, no further personal data were collected and there is no way to trace back to the identity of examined individuals from the available data. Data collected included, gender, age, education of both parents, family yearly income, parent’s nationality, the type of marriage meaning if Greeks (man and woman) were being married to other nationalities or not, if children are brought about in a single family, the presence or not of pediculosis and the presence of any additional dermatological conditions. The criterion of pediculosis or dermatological conditions was considered as affirmative if the child was infested at the time of the investigation. The procedure is presented in a previous work [10]. Possible bias in the present investigation would be the misinterpretation of the questionnaire. Yet, the questionnaire was self-explanatory and the health professional was trained to overcome any obstacles.

The study was conducted after special license from the Municipality of Athens conformed to the standards set by the Declaration of Helsinki. Reporting of the study conforms to STROBE statement along with references to STROBE and the broader EQUATOR guidelines [11]. 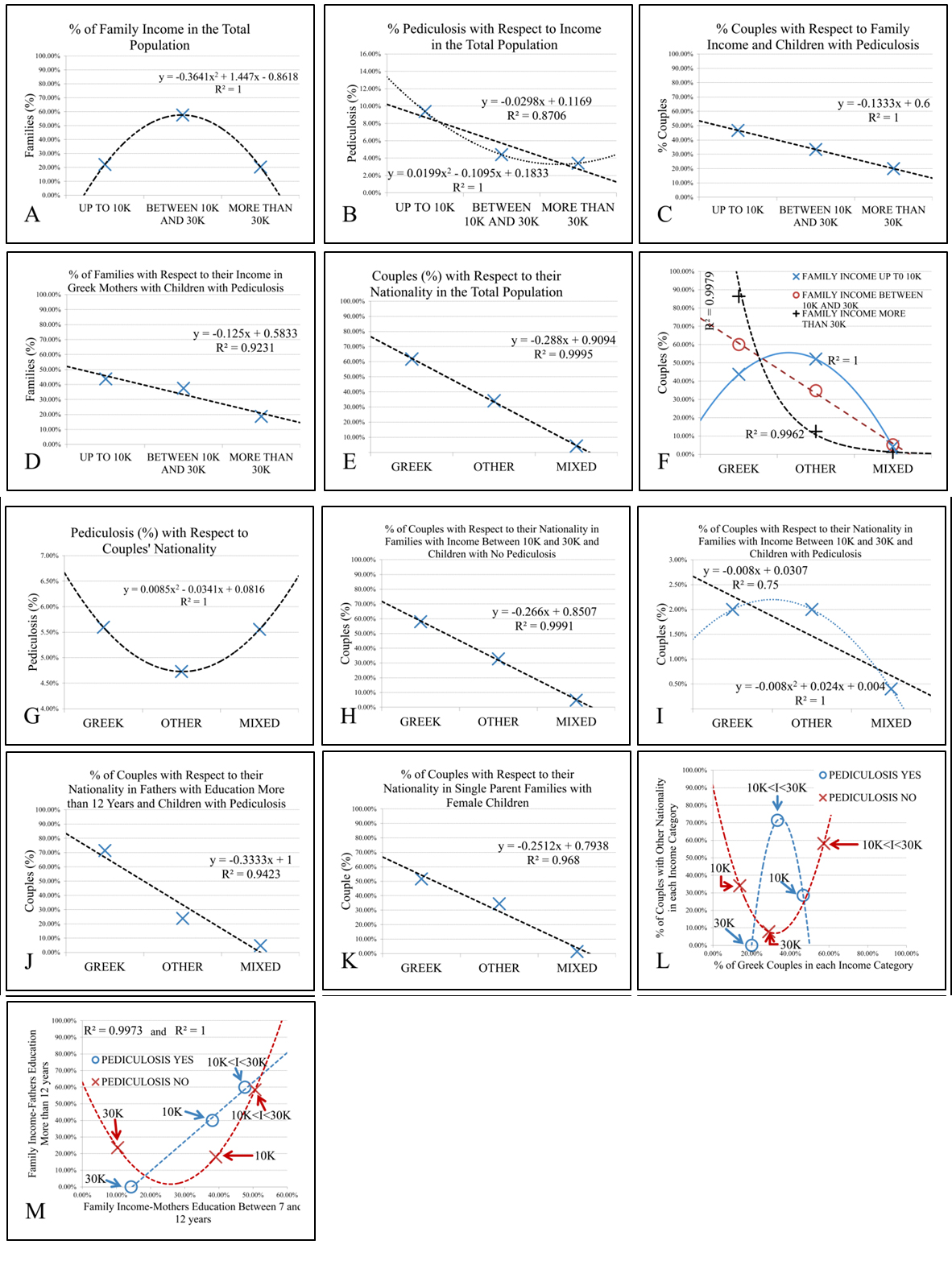 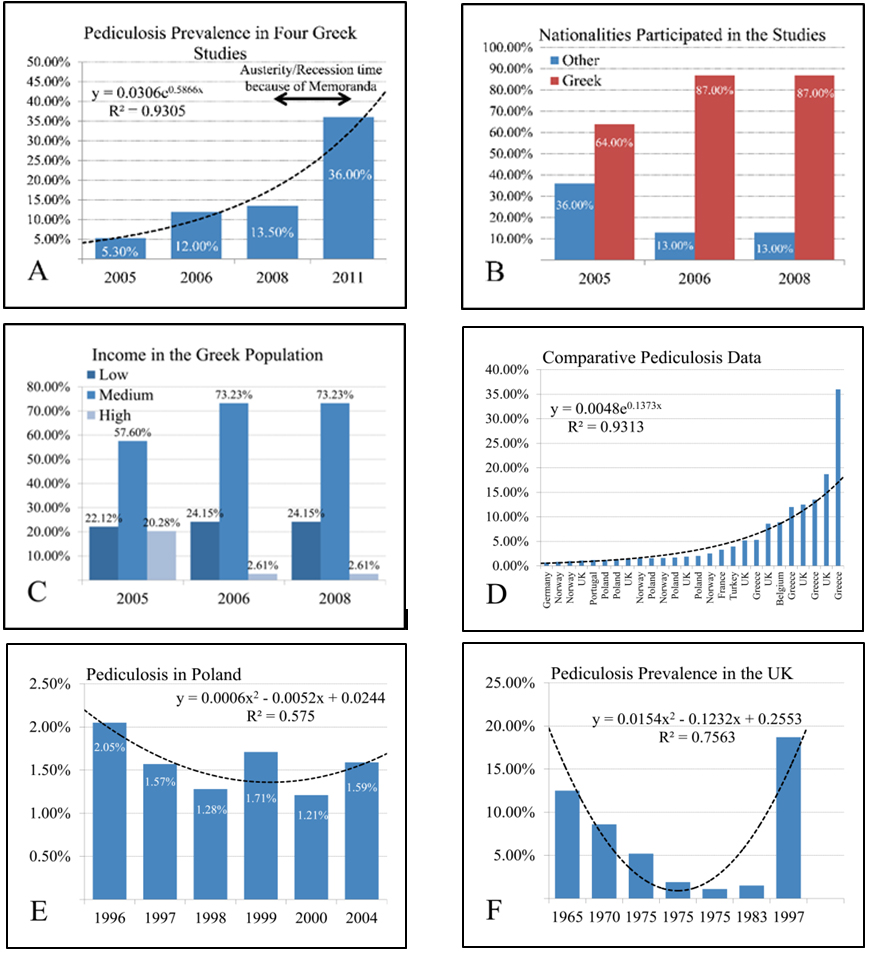 Figure 2. Comparative data from Greek and other studies with respect to pediculosis.

Based on our study, total infestation rate was found to be at the ~5% level (5.3%), while reports on pediculosis prevalence vary between countries and populations studied. It appears that pediculosis really varies based on the method of study and the geographic location. In four studies in Greece we have seen that the prevalence of pediculosis rose significantly during the recent years (Figure 2A). Interestingly, in the other studies in Greece as compared to our study the rate of other nationalities participating in the studies decreased (Figure 2B) as also did the higher incomes prevalent with pediculosis (Figure 2C). The lowest rates of pediculosis were observed in Germany and Poland (Figure 2D, 2E). From available data pediculosis in the UK appeared to manifest a reverse bell-shape, with an increasing tendency up to 1997 (Figure 2F).

Pediculosis capitis, tends to be an increasing problem within the children population. The interesting concept of pediculosis is that there is little known about lice biology. Understanding the mechanisms through which humans get infested by these parasites is of great importance, especially in times where socioeconomic factors are at decay. The problem with these parasites is not the sole infestation but the ability to transmit other bacterial or viral generated diseases, as it has been recently proposed for the Dark Ages [12]. Another important finding is that lice can and probably have become resistant to current treatments, which indicates a remarkable mechanism of survival and thus of need of research on the field of prevention and treatment, which applies both to animal and human infesting parasites [13,14].

In the present work we have investigated the patterns of socioeconomic (such as origin of the parents, income and education) factors influencing the incidence of pediculosis in the kindergartens of Athens as well as we have performed several regression analysis attempts in order to unravel its dynamics. There are not many works in the literature handling this topic especially for the Greek area. To the best of our knowledge this is the first study that provides a regression analysis for these variables together and in that extent.

Infestations were found to be at the ~5% level (5.3%), while reports on pediculosis prevalence vary between countries and populations studied. It appears that pediculosis really varies based on the method of study and the geographic location. In four studies in Greece we have seen that the prevalence of pediculosis rose significantly during the recent years [15,16]. Interestingly, in the other studies in Greece as compared to our study the rate of other nationalities participating in the studies decreased as also did the higher incomes prevalent with pediculosis. The lowest rates of pediculosis were observed in Germany and Poland [17,18]. Another interesting observation, holding as correct the study of Doulgeraki et al. (2011), was that the high rates of pediculosis coincided with the recession years in Greece. It has been reported that pediculosis rates increase in areas or in times of population impoverishment [19-23].

Pediculosis in the general population follows polynomial dynamics, while in the percentages of couples, which have children with pediculosis the dynamics become linear (R2=1). This is a strong indicator, also mentioned before in the literature, that impoverishment enhances lice infestation. This can be explained by the fact that pour families do not have access either to prevention methods, clothes, hygiene conditions or even social infrastructures. Similarly, linear dynamics were followed when examining the percentages of families, whose mother is of Greek origin and with respect to income, as well as in single parent families. Plotting Greek couples versus other nationality couples with respect to income and pediculosis it has confirmed our previous observations, where in low incomes more Greek families have children with pediculosis as compared to other families and in medium incomes this is reversed. The peak of the curve for pediculosis-positive children is at the medium income, while for pediculosis-free children is at the high incomes. The curves appear to be symmetrical which stresses the significance of income in the rates of pediculosis.

Another interesting observation, that was abstracted from our results, was the fact that when examining the role of education and income, it appeared that in pediculosis positive cases, in higher incomes mothers’ education plays more critical role than fathers’ education. This is balanced out in lower incomes, where the percentages of fathers and mothers are similar. This pattern changes in pediculosis negative cases, where higher incomes are balanced, with fathers and mothers participating equally to pediculosis incident, but at lower incomes mothers are again the more influential, indicating that probably they are the ones “saving” their children from phthiriasis. This is an interesting result since it shows that income influences mothers, which influence pediculosis incidence further on.

As it has been stressed in other reports too, pediculosis is a common infestation, yet we do not have a plethora of data in order to understand its dynamics and epidemiology. Furthermore, it appears that genomic studies are also scarce. It has been probably neglected as a topic since it appears that its presence and treatment are taken for granted. Yet, the increasing observations on therapy-induced resistance and the fact that lice can be the vector for other diseases makes it necessary that further studies should be conducted on this topic, especially in this era where geopolitical events force human beings to relocate.

Concluding, in the present study we have investigated the inter-relation of several infestation-influencing factors in the studied population, we have identified subpopulation characteristics that influence lice infestation and finally it appeared from our findings that lice infestation is not anthropocentric but it is environmental/ circumstantial-specific.

This work was funded in part by the University of Athens, Medical School.

Disclosures and conflict of interest

The authors have nothing to disclose and no conflict of interest.

©2016 George I. Lambrou. This is an open-access article distributed under the terms of the Creative Commons Attribution License, which permits unrestricted use, distribution, and reproduction in any medium, provided the original author and source are credited.

Figure 2. Comparative data from Greek and other studies with respect to pediculosis.