Early-stage laryngeal cancers may be treated with partial surgery thanks to advances in diagnosis and surgery. The aim of our study is to compare the degree of voice disorders and respiratory function between healthy volunteers and patients that underwent a partial laryngectomy surgery. 30 patients who underwent partial laryngectomy due to laryngeal cancer and 30 healthy volunteers were included in the study. Voice analysis was made via vocal assessment computer program. The participants filled voice handicap index. In addition, an otorhinolaryngologist assessed the roughness, hoarseness and breathiness parameters of voice. Each patient underwent pulmonary function test for pulmonary function. In people underwent to partial laryngectomy, shimmer value, F0 value in cordectomies, jitter value in cordectomy, frontolateral and supracricoid groups were observed to be statistically increased compared to control group (p<0.05). Maximum phonation time was observed to be decreased in all partial surgery (p<0.05). While pathology was observed in pulmonary function test in 50% patients in post-surgery period, it was observed that the most affected group was supracricoid laryngectomy. Voice and respiratory problems in partial surgery still constitute a problem for surgeries. In this study, we found that even though patients have adequate pulmonary function, they have an inferior voice quality with regard to their own perception.

Laryngeal cancer constitutes 30% of all head and neck cancers [1]. According to Ministry of Health, laryngeal cancer is the sixth most common type of cancer constituting about 9.7% of all cancers in Turkey [2]. Therefore, laryngeal cancer is one of the most important oncological diseases in head and neck region. Today, laryngeal cancer is diagnosed early thanks to the widespread use of endoscopy in physical examination and awareness of patients. Early-stage laryngeal cancers are treatable in a manner to protect both laryngeal physiology and functions. These methods are surgery and radiotherapy. Laryngeal physiology and function is possible with laryngeal reconstruction of larynx during partial laryngectomy. Partial laryngectomy patients do not need a permanent tracheotomy, in addition their voice function, social and economic life continues smoothly. However, diverse qualification studies are conducted in functional quality of respiration, swallowing and voice [3-24]. In these studies, there is significant distortion observed in general, however, there is not adequate study that includes many methods and comparison of them. Our aim in this study is the comparison of voice and pulmonary functions in patients underwent partial laryngectomy in our clinics with objective and subjective methods.

Voice analysis of groups was made via Vocal Assessment computer program. Fundamental F0 value (F0 maximum and minimum), jitter and shimmer values of each participant were calculated. Each participant's maximum phonation time (MPT) was recorded in seconds. MPT measurements were applied 3 times; the highest value recorded was taken into consideration. While calculating these values, the patient was asked to take a deep inspiration and to hold his breath, then he/she was asked to exhale comfortably /a:/ as much as he could. Measurements were calculated in seconds. With the same voice, the time of /s:/ and /z:/ voices are detected and s/z ratio was calculated. Dysphonia severity index (DSI) was calculated with the following formula in the light of data obtained from phonetogram of each patient: [DSI = 0,13xMPT + 0,0053xF0(high) - 0,26xI(Low) - 1,18 x jitter(%) + 12.4].

Prior to this procedure, patients filled Turkish version of Voice handicap index (VHI). Each question was answered by giving 0 to 4 points. Total score ranges between 0 and 120, voice disorders raise as test scores raise. Physical, functional and emotional parts of this survey were separately filled for each person.

SPSS 15.0 software was used in statistical analyses. The difference between partial laryngectomy group and the control group was assessed with Mann-Whitney U test. The correlation between groups was examined with Pearson's correlation analysis. P < 0.05 is considered to be statistically significant.

The average age of patients underwent partial laryngectomy was 58,38 (40-75 years) and the entire patient group was male. The patients were observed for 29.38 months (6-70 months).

Table 1. Mean values of the voice parameters among groups

Figure 1. Mean values of the maximum phonation time assesment and its distribution among groups. 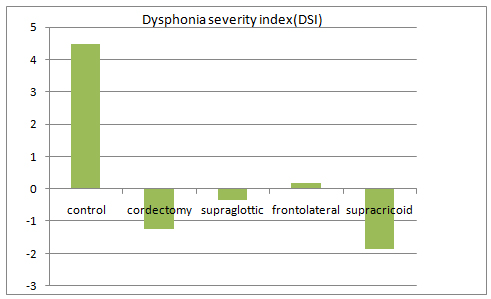 When PFT results were analysed (Table 2), we observed that the pulmonary function test was affected in 75 % of patients underwent supracricoid laryngectomy. The least affected group was cordectomy group.

There was a statistical correlation between F0, MFT, DSI, s/z ratio, jitter %, shimmer, HNR and VHI-total values between control and partial laryngectomy groups (p < 0.05). Other correlation analyses were given in Table 3.

While fundamental F0 values ​​in normal speech are 100-150 Hz in males, this value is around 180-220 Hz in females. In our study, these values ​​were between 120 and 135 Hz in healthy participants. While Hirano et al. assess individually the F0 value as the main parameters of voice, they emphasize that this value changes after laryngeal surgeries [25,26]. It was determined in several studies that F0 value increase from 123,07 to 243 Hz following the laser or conventional cordectomy and supracricoid laryngectomy [3-13]. In our study, we observed that F0 value increased in all persons underwent partial surgery. We observed that this value increase statistically in patients underwent cordectomy compared to control group.

It was observed in many studies that Jitter and shimmer values were smilarly increased after surgeries such as cordectomy, frontolateral, supracricoid and vertical partial laryngectomies [3,4,6-8,10,12-20]. In our study, we detected that the average increase of jitter value in patients underwent partial laryngectomy. This result is consistent with other studies. We observed that F0, jitter and shimmer values increased in all subgroups of partial laryngectomy. We associate this disorder in voice with vocal cords fibrosis and stiffness in vocal cord. In addition, we think that this reduction in larynx volume contributes to this increase. Therefore, cord intervention causes changes in voice parameters and leads to a loss of vocal performance.

DSI, comparising many voice phonetograms, is first defined by Wuyts et al. and it is a usefull measure of the disorder in voice disorders. DSI is an instrument valid in differentiation of pathological and non-pathological voice. DSI value is more sensitive than the value of GRBAS and it easily detects even small changes in voice. There is no adequate study on changes in DSI value after surgery. In our study, the patients underwent partial laryngectomy had lower DSI value than control group; so, it was an indicator of deteriorating voice (p<0,01). The maximum decrease was found to be in supracricoid laryngectomy group. We obtain more sensitive assessment with DSI than RBH. DSI, which is obtained blending objective aerodynamic findings of voice, is a useful method for detection of voice disorder. In our study, DSI value was observed to be lower in people who had relatively worse voice. However, DSI was observed to be higher in people who had relatively better voice. We think that this method is very valuable and useful instrument in postoperative voice follow-up.

Voice handicap index (VHI) is a measure of quality of life scale that is used specific to disease that is used widely today. Changes with 14 points and above in this value are statically significant [27]. VHI is used to detect the level of several diseases, also it is a scale used in preoperative and postoperative follow-up. In many studies conducted with partial laryngectomies, VHI value was detected to be increased [6,11,24]. In our study, VHI value was observed to increase in supracricoid laryngectomy compared to control group (p<0,05). We think that the high VHI value was associated with patient's failure to accept his/her voice. The fact that the test was made by the patient subjectively supports this result. It is indicated that VHI score is high in people having professional activity and adaptation problems [28].

MPT is an important indicator reflecting the adequacy of air support during speech [21]. Laryngectomy operation leads to a decrease in maximum phonation time due to incomplete glottal closure [4,6-8,10,23]. In our study, MPT value was 29,83 sec, while it was observed to decrease to 15,7 in patients underwent to partial laryngectomy. We think that the reason for this reduction is associated with both decrease in lung capacity and defects in glottal closure. Therefore, this mechanism should be dealt with in detail while selecting sub-groups of partial laryngectomy [29].

Another aerodynamic evaluation method is s / z ratio. If MPT value is 10 seconds or less and s/z value is higher than 1,4, then MPT decrease is related with laryngeal origin. According to Castro et al. MPT value in supracricoid laryngectomy patients is averagely 12 sec and it is below 10 sec in 30 % of these patients. It is observed that the reason of 50 % of the patients is pulmonary origin (1.4> s/z value) [24]. When examined the results of pulmonary function test, we observe that the least affected group is cordectomy. A mild and moderate obstruction and restriction findings were observed in these patients. MPT value was 10 sec and below in ¾ of cordectomy group. When it was assessed with s/z value, 50% of this reduction was pulmonary origin (s/z <1.4), while 25 % of it was laryngeal origin (s / z > 1.4). Severe obstruction and mild restriction findings were observed in 44 % of patients underwent supraglottic laryngectomy. In persons with severe obstruction findings DSI value was low and the quality of voice was bad. We believe that aerodynamic unit plays an active role in voice production. Pathologic values in PFT were detected in 57,1 % of group underwent frontolateral laryngectomy. MPT value was measured as 5 sec and the reason was detected to be laryngeal origin. The quality of voice was reduced in these patients. The maximum distortion in PFT was observed in patients underwent supracricoid laryngectomy. One of the most important criteria in patient selection while planning supracricoid laryngectomy is to have an adequate lung capacity. MPT value was measured as 10 seconds in 2 patients and when examined s/z rate, the reason was observed to be pulmonary origin. A severe obstruction in PFT was observed in 1 patient. FEV1/FVC rate was observed to be 60 % and above in all partial laryngectomy. The importance of preoperative patient assessment revealed in partial laryngectomy selection in this part of operation.

Laryngeal cancer is a type of cancer that has been often observed since long time and can be treated with partial surgical methods. Partial laryngectomy provides the same survival and disease control with total laryngectomy. In this study, we found that the quality and perception of voice is associated with pulmonary capacity and subjective acceptance of voice. All of these mechanisms should be evaluated in partial surgery selection. The voice and its quality are associated with laryngeal residual functional unit and pulmonary reserves. It is useful to direct patients to voice therapy for correction of postoperative voice. As far as we know, there is not any comprehensive study such as this study in literature. Our aim is to ensure the realization of more extensive studies that compare conservative surgeries in terms of function.

All the authors met the whole criteria of the authorship and contributorship.

©2016Demir MG.This is an open-access article distributed under the terms of the Creative Commons Attribution License, which permits unrestricted use, distribution, and reproduction in any medium, provided the original author and source are credited.

Table 1. Mean values of the voice parameters among groups

Figure 1. Mean values of the maximum phonation time assesment and its distribution among groups.