Renal cell carcinoma (RCC) accounts for >90% of malignant solid lesions in the kidney. Each year, approximately 65,000 new cases and almost 14,000 deaths related to kidney cancer are documented in the United States [1]. The peak incidence of RCC is at ages between 60 and 70 years. Risk factors are male gender, smoking, obesity, and hypertension [2].

Over the past years, a small albeit constant increase in the incidence of RCC was observed. Various factors influencing the incidence of RCC were identified. One such factor is a change in lifestyle, particularly concerning obesity and the smoking habit. Another important factor is better diagnosis, namely, the more frequent use of high- resolution technical devices such as ultrasonography, computed tomography, and magnetic resonance imaging. Using these techniques, early-stage RCC is often detected by accident. Many of these cases are qualified for curative treatment [3,4].

The incidence of RCC shows regional differences and the range between 3 and 10 per 100,000. The 5-year survival rate of all stages of RCC is estimated between 40% and 60% [3,4]. In contrast, the 5-year survival rate of metastasized RCC is estimated to be less than 10%. Hence, to confirm or exclude metastases is essential for the prognosis of patients with RCC [2-4]. At diagnosis, approximately 20%–30% of the patients with RCC are found to have metastases. Bone is the second most common site of metastasis in patients with RCC after the lungs [2,5,6].

Concerning the treatment of RCC, it is important to distinguish between metastatic and non metastatic disease. In most cases, patients with non metastatic RCC can be operated on with a curative intention. If metastases have occurred, all available treatment options are palliative. Chemotherapy, radiation, and immunotherapy may merely prolong life expectancy to a limited extent [2,5]. 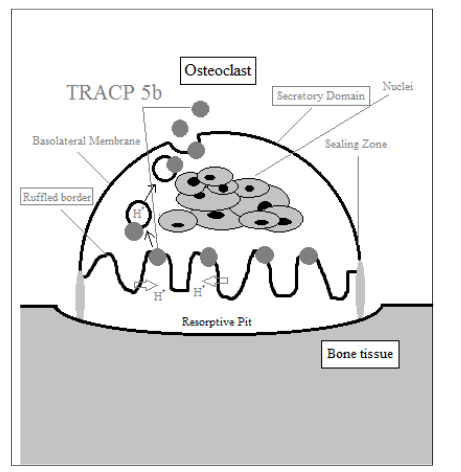 Figure 1. Multinucleated Osteoclast in the process of bone resorption 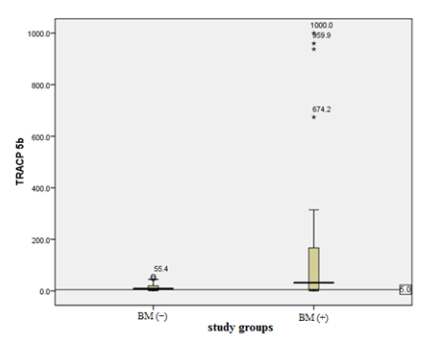 Figure 2. TRACP 5b serum concentrations of patients without [BM (-)] and with bone metastases [BM (+)]

TRACP is an enzyme that can be found in different types of cells of the mononuclear phagocyte system. It possesses 2 enzymatic functions. TRACP may function as a phosphatase; on the other hand, it may produce reactive oxygen species. Two forms of TRACP have been identified in human serum: TRACP 5a and 5b. TRACP 5a is generated by macrophages and dendritic cells, which elevate serum concentrations under inflammatory conditions [11,12].

TRACP 5b is produced by osteoclasts, whose principal function is resorption of bone tissue. Because TRACP 5b appears to be produced exclusively by osteoclasts, Halleen et al. and Ylipahkala et al. claim that TRACP 5b is a specific marker of bone resorption [11,12]. Immunoassays for isoform 5b of TRACP are commercially available.

Because there appears to be a discrepancy between different studies on the diagnostic value of TRACP 5b for bone metastases in different cancers, we aimed to verify whether TRACP 5b is a useful diagnostic tool for the detection of bone metastases. Similar to Jung et al., we chose patients with RCC for this study. Hence, the objective of the present study was to test whether elevated serum concentrations of TRACP 5b reliably indicate the presence of bone metastases in patients with RCC.

TRACP 5b data were obtained using the Bone TRAP Assay (Immunodiagnostics Systems GmbH, Mainzer Landstrasse 49, 60329 Frankfurt, Germany). This assay semiquantitatively measures in vitro activity of TRACP 5b fragments in the serum. At the first step of the Bone TRAP assay, a microtiter plate coated with a monoclonal anti-mouse Immunoglobulin G antibody binds a monoclonal anti-TRACP antibody. At the second step, TRACP standards, controls, and patients’ samples are added. A release reagent then induces the dissociation of TRACP from binding proteins and the detached TRACP molecules associate with the anti-TRACP antibody immobilized on the microtiter plate. At pH 6.1 (which suppresses the TRACP 5a activity) p nitrophenylphosphate, the substrate of the Bone TRAP Assay, is added. Finally, the enzyme–substrate reaction is stopped by adding sodium hydroxide after an incubation period of 60 minutes. Spectrophotometric measurements were performed at 405nm.

The median and range were determined for the groups T(+) BM() and T(+) BM(+). Sensitivity, specificity as well as positive and negative predictive values was calculated. A receiver operating curve (ROC) was plotted. All statistical calculations were performed using the SPSS 16.0 software (SPSS Statistics), Bias Windows, version 9.17 (Epsilon) and Microsoft Excel 2007.

These results are shown in Table 1. In this study, the TRACP 5b cutoff was 5.0 U/L, according to a study conducted by Salminen et al. [17], who analyzed TRACP 5b as a marker of skeletal changes in patients with prostate cancer using the Bone TRAP Assay.

Table 1. Descriptive statistics of the TRACP 5b values in patients with RCC

The medians of both groups, T(+) BM(−): 8.7U/L and T(+) BM(+): 31.9U/L, were significantly above the cutoff value used in this study (5.0 U/L). The specificity was 36.7%; sensitivity reached 76.5%. We tested whether a different cutoff may be more appropriate for the diagnosis of bone metastasis in patients with RCC using TRACP 5b. Using ROC analysis, we identified the optimal cutoff with regard to the existing values of our study at 50.0 U/L. The area under the curve (AUC) value was 0.68. The ROC curve is shown in Figure 3. We calculated sensitivity, specificity, positive and negative predictive value at the cutoff 50.0 U/L and compared the diagnostic value of TRACP 5b at the cutoff values 5.0 U/L and 50.0 U/L. The quality parameters for the cutoff values 5.0 U/L and 50.0 U/L are displayed in Table 2. 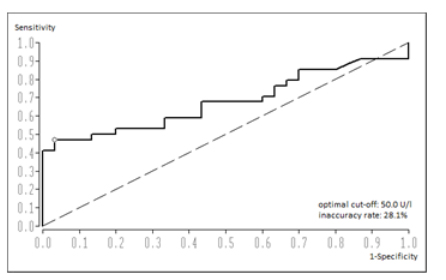 Figure 3. ROC analysis for TRACP 5b

Besides, our findings suggest that further analysis is required with regard to the TRACP 5b cutoff used for the diagnosis of bone metastases. For TRACP 5b concentrations obtained in our study, we identified the optimal cutoff value at 50.0 U/L in ROC analyses. After applying the cutoff of 50.0 U/L instead of the cutoff 5.0 U/L recommended by Salminen et al. [17], the quality parameters of the TRACP 5b analysis changed. Sensitivity decreased to 47.1% from 76.5%; however, the specificity increased considerably to 96.7% from 36.7%.

©2014 Preussner R. This is an open-access article distributed under the terms of the Creative Commons Attribution License, which permits unrestricted use, distribution, and reproduction in any medium, provided the original author and source are credited.

Table 1. Descriptive statistics of the TRACP 5b values in patients with RCC

Figure 1. Multinucleated Osteoclast in the process of bone resorption

Figure 2. TRACP 5b serum concentrations of patients without [BM (-)] and with bone metastases [BM (+)]

Figure 3. ROC analysis for TRACP 5b