Comparison of protective activity of clovamide and caffeoyl tyrosine against carbon tetrachloride-induced liver injury, and their serous metabolites in mice

Acute and chronic liver injuries, which can result from exposure to oxidative stress and reactive oxygen species, are serious global issues. Numerous medicinal plant formulations have been generated to protect the liver from these conditions. Based on this, radical scavenging activities of formulation constituents have been functionally associated with their ability to reduce such liver injuries. Thus, compounds with potentially therapeutic activities have been identified and characterized, e.g., epi-gallocatechin gallate from green tea is a well-known radical scavenger, which ameliorates liver injury induced by carbon tetrachloride (CCl4) [1,2]. Similarly, flavonoids such as quercetin and isorhamnetin and their vegetable derivatives, and also chlorogenic acid and associated derivatives, have been shown to exert strong radical scavenging activities toward liver injury induced by CCl4 in mice [3-7]. However, the radical scavenging and the hepato-protective effects of clovamide (caffeoyl dopa), which is distinct in chemical structure to chlorogenic acid, have not yet been characterized in mice. Clovamide (PubChem CID: 6443790) is formed by acid-amide bonding between caffeic acid and dopa (3, 4-dihyroxyphenylalanine), whereas chlorogenic acid is formed by ester bonding between caffeic acid and quinic acid. Clovamide is found in cacao (especially, in the peel) and coffee beans [8] and is consumed in daily meal. Thus, it is important to ascertain if clovamide exerts hepato-protective effects using a mouse model, and to assess how the compound is metabolized. Additionally, although the anti-oxidative and neuro-protective activities of clovamide have been similarly reported in cell lines [9-12], the protective effects of clovamide and caffeoyl tyrosine (PubChem CID: 14352555) and their metabolites have not been adequately assessed against CCl4-induced liver injury in mice [8,13].

Clovamide was synthesized from caffeic acid and L-3, 4-dihydrophenylalanine methyl ester hydrochloride (Sigma-Aldrich, Inc., USA) in the presence of dicylohexylcarbodiimide (Sigma-Aldrich) and dry pyridine, according to the method of Tebayashi et al [15]. The synthesized crude clovamide was fractionated by cellulose (ADVANTEC, Japan) column chromatography, using 2% acetic acid as an eluent. The clovamide fractions was added to a DIAION HP-20 (Mitsubishi Chem. Co., Japan) column, followed by elution in methanol (MeOH), after washing the column in distilled water. The clovamide rich-fraction was further purified on a LH-20 column, with MeOH as an eluent. Further purification was conducted by preparative high performance liquid chromatography on a Develosil C-30 UG-5 (20 mm internal diameter (i.d.)×250 mm) column using a solvent system composed of 5% acetonitrile (MeCN)/1% acetic acid (solvent A) and 40% MeCN (solvent B). A linear gradient of solvent B in solvent A was used for the development of the solvent to isolate clovamide as a single peak on an analytical column (Develosil C-30 UG-5, 4.6 mm i.d. ×250 mm).

The DPPH radical scavenging activity of clovamide and caffeoyl tyrosine was determined according to the methods of Suda [16] and Sugawara et al. [16,17], and expressed as the Trolox equivalent (mole/mole sample).

Blood was collected via heart puncture using nembutal (Dai Nippon Pharmaceutical Co., Ltd, Japan) anesthesia (intraperitoneal injection of 3.3 mL/kg/animal) at 22 h after i.p. injection of either CCl4 solution (for CCl4 and CCl4+sample groups) or olive oil (for the control group).

Serum was prepared by centrifugation (1000 × g for 15 min), from which alanine aminotransferase (ALT) activities were measured according to the literature [17,19]. One unit of enzyme activity was defined as the amount of enzyme which transformed 1 µmol substrate per min per litre of serum (µmol/min/L of serum at 25˚C). Statistically significant differences were determined by Student’s t-tests, and a P < 0.05 was considered statistically significant.

To determine clovamide metabolites, approximately 0.2 mL serum from the clovamide group was mixed with 1.0 mL 0.067 M phosphate buffer (pH 5.0). The mixture was added to a DIAION HP-20 column (1 cm i.d. × 4 cm) equilibrated in distilled water, and then washed with distilled water. Metabolites were successively eluted with 50% and 100% MeOH. Both eluates were combined, evaporated, and re-dissolved in 2 mL MeOH. This was mixed with distilled water and chloroform (CHCl3) at a 1:2:1 ratio (MeOH:H2O:CHCl3, v/v/v). The upper layer was then evaporated and re-dissolved in a small MeOH volume before ultra-performance liquid chromatography (UPLC)-mass spectrometry (MS) analysis. Compounds were analyzed by high-resolution electro spray ionization ToF-mass spectroscopy (HRESI-Tof-MS) (Xevo Q-Tof MS, Waters, Manchester, UK) in the negative mode, using a BEH C-18 column (0.5 × 50 mm, 1.7 μm; Waters, Ireland). The Developing solvent comprised 0.1% HCOOH in water (solvent A) and 0.1% HCOOH in MeCN (solvent B). Developing solvent was eluted at a flow rate of 0.3 mL/min with gradient elution (0 min: 90% A, 6 min: 60% A, 7 min: 40% A, 8 min: 10% A, 9–13 min: 90% A). Cone and desolvation gas flows were 50 L/h and 800 L/h, respectively. The capillary voltage was 2.5 kV, the source temperature was 120°C, and the desolvation temperature was 400°C.

For caffeoyl tyrosine metabolite determination in mice, male C57BL mice (ten weeks old) were orally administered caffeoyl tyrosine (10 mg/0.5 ml 0.1% CMC) after over-night diet deprivation. Blood was collected from the heart 30 min after oral administration, and serum prepared by centrifuging bloods at 1000 × g for 15 min at 4°C, and mixed with 0.067 M phosphate buffer (pH 5.0) in a 1:2 ratio. This was followed by the same procedure as mice administered clovamide.

Figure 1:  Effects of clovamide and its related compounds on serum ALT levels in a mouse liver injury model, induced by carbon tetrachloride (CCl4).

The identification of clovamide metabolites and associated metabolism 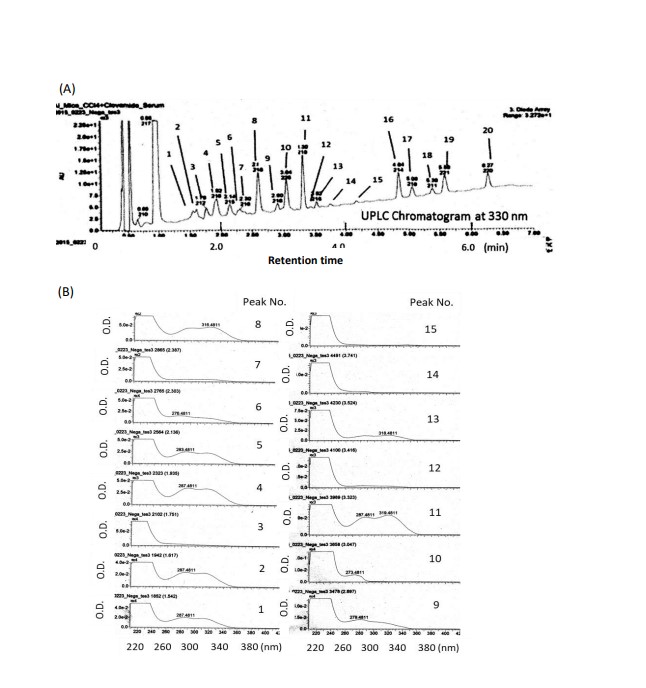 Figure 2:  Ultra performance liquid chromatography (UPLC) (A) and UV specra of each peak No. (B)  in serum  of mice administered clovamide 30 min before intraperitoneal injection of carbon tetrachloride (CCl4), followed by blood collection 22 h later. 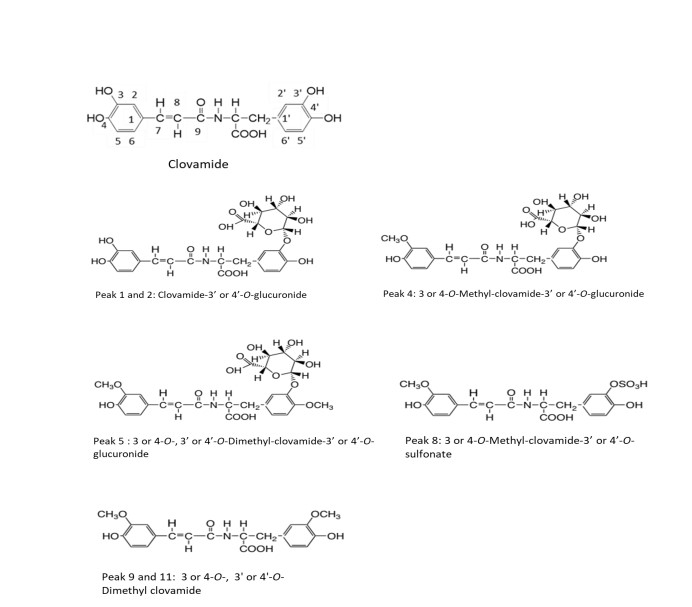 From accurate mass numbers and elemental formulas (Table 1), the UV spectra of each peak, and previous reports showing that phenolic compounds administered to rats and mice could be metabolized to methylated compounds, glucuronides, and sulfates [20-25], the chemical structures of peaks 1, 2, 4, 5, 8, 9, and 11 were confirmed as shown in Figure 3.

These compounds in serum indicated that clovamide with acid-amide bonding is also glucuronidized, methylated and/or sulfated in gastro-intestinal tract and/or liver like rosmarinic acid with ester bonding between caffeic acid and 3,4-dihydroxy-benzenepropionic acid [26].

As methylation and/or glucuronidation of (-)-catechin at the 3’ or 4’ position of the B-ring are considered to decreases radical scavenging activities, the activity of identified metabolites, containing less hydroxyl groups than the original compound (clovamide), suggests they may be weaker than clovamide to reduce live injury. Previous reports suggesting that quercetin, curcumin, rosmarinic acid, and chlorogenic acid, having strong radical scavenging activities, may be glucuronidized and sulfated in vivo [20-25,27], potentially supported the notion that clovamide could be similarly metabolized and excreted.

The identification of caffeoyl tyrosine metabolites and associated metabolism

MS spectrum of ion corresponding to each ion peak observed at Rt (retention time) 1.958, 2.060, 2.475, and 2.910 min on the total ion chromatogram (TIC), in the serum of mice administered with caffeoyl tyrosine by single administration, and the chemical structure proposed from the MS spectrum are shown in Figure 4A–4D. 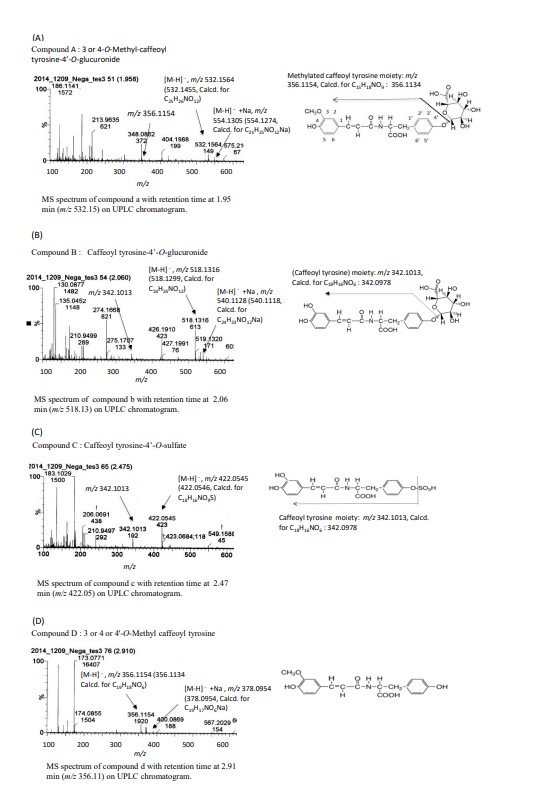 The blood collected by heart puncture from mice 30 min after oral administration of caffeoyl tyrosine was centrifuged at 3000 rpm for 10 min, and the obtained serum, that was mixed with pH 6.0 buffer, was poured on to the Diaion column (1 i.d. x 3cm), then eluted with 50 % MeOH after washing the column with distilled water. The eluate (polyphenol fraction) was analyzed by UPLC-Xevo QTof MS equipment.

The presence of these compounds in serum indicated that cinnamic acid derivatives composed of caffeic acid and amino acids, via acid-amide bonding, could be glucuronidized or sufonated on DOPA or tyrosine moieties, which are more hydrophilic than caffeic acid, in vivo. Similarly, methylation could occur on the caffeic acid moiety which is more hydrophobic than DOPA and tyrosine moieties, however more precise studies are required to confirm these observations. Although the presence of glucuronide and sulfate in the urine of healthy volunteers administered caffeoyl tyrosine could not be clearly confirmed [28], our data might suggest that caffeoyl tyrosine could be metabolized in vivo while undergoing glucuronidation and sulfation.

Figure 5:  Proposed metabolism of clovamide and caffeoyl tyrosine in mice.

The author declare no conflict of interest.

The author would like to express my sincere gratitude to Ai Kaneko and Kayoko Sudo for their help with the experiment and data processing.

This study was partly supported by Grant-in Aid for Scientific Research (No.16658054, to K.I.) from the Ministry of Education, Culture, Sports, Science and Technology of Japan, and partly by The Japan Food Chemical Research Foundation.

©2022 Igarashi K. This is an open-access article distributed under the terms of the Creative Commons Attribution License, which permits unrestricted use, distribution, and reproduction in any medium, provided the original author and source are credited

Table 1: Retention times of ions (Rt) on the total ion chromatogram (TIC), which were corresponded to peaks on the ultra-performance liquid chromatography (UPLC)-chromatogram of serum of mice administered clovamide, and accurate mass numbers of deprotonated molecular ions and its fragment ions, elemental formula, and constitution.

Figure 1:  Effects of clovamide and its related compounds on serum ALT levels in a mouse liver injury model, induced by carbon tetrachloride (CCl4).

Figure 2:  Ultra performance liquid chromatography (UPLC) (A) and UV specra of each peak No. (B)  in serum  of mice administered clovamide 30 min before intraperitoneal injection of carbon tetrachloride (CCl4), followed by blood collection 22 h later.

The blood collected by heart puncture from mice 30 min after oral administration of caffeoyl tyrosine was centrifuged at 3000 rpm for 10 min, and the obtained serum, that was mixed with pH 6.0 buffer, was poured on to the Diaion column (1 i.d. x 3cm), then eluted with 50 % MeOH after washing the column with distilled water. The eluate (polyphenol fraction) was analyzed by UPLC-Xevo QTof MS equipment.

Figure 5:  Proposed metabolism of clovamide and caffeoyl tyrosine in mice.